Christian 4K Wallpapers with inspirational Bible verse quotes on beautiful images and backgrounds. Download Ezekiel 1:1 KJV ultra hd wallpapers with Bible verses and share with your friends and family on Instagram or any social media platform. You can also use the links below to click and share the Ezekiel 1:1 KJV 4k backgrounds on Facebook, Twitter, Pinterest, LinkedIn, WhatsApp and other social media websites. Scripture Images (https://www.scripture-images.com) offers a large collection of UHD Christian wallpapers 3840x2160 and background images with Scripture quotes. 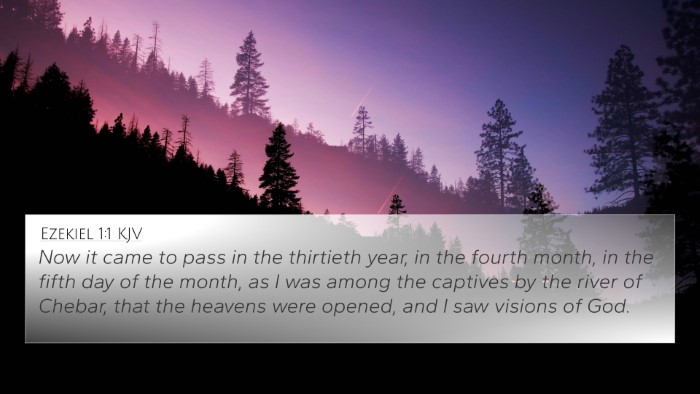 Now it came to pass in the thirtieth year, in the fourth month, in the fifth day of the month, as I was among the captives by the river of Chebar, that the heavens were opened, and I saw visions of God. 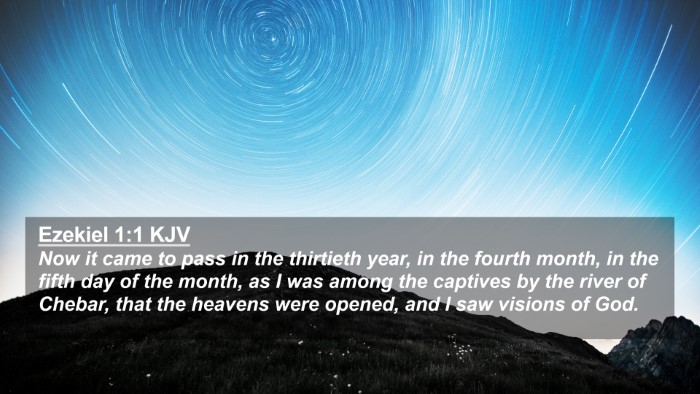 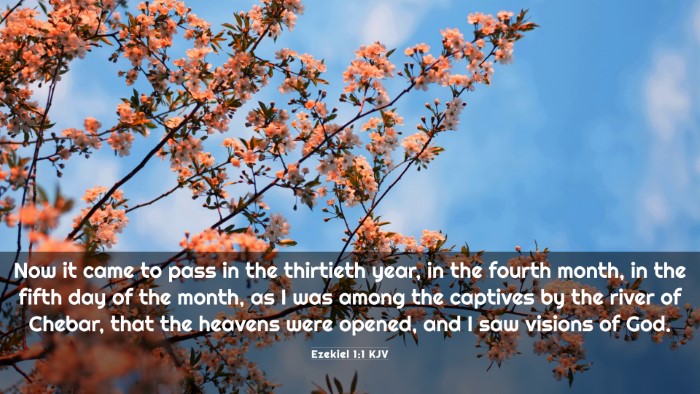 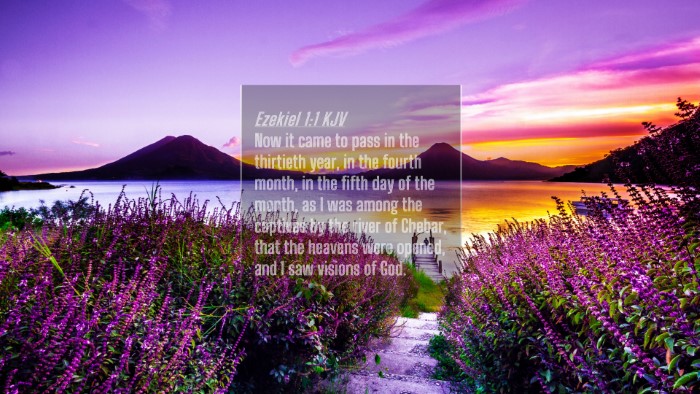 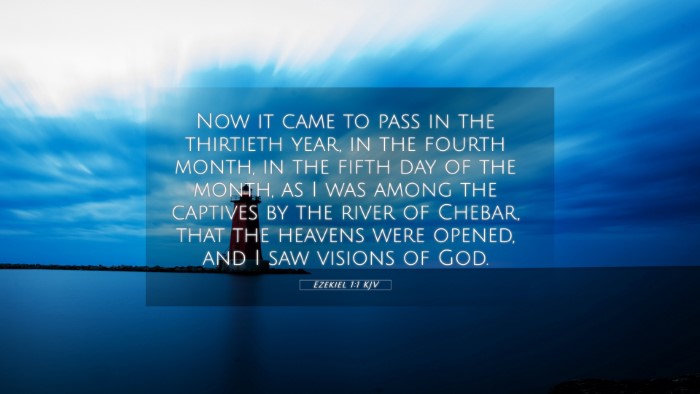 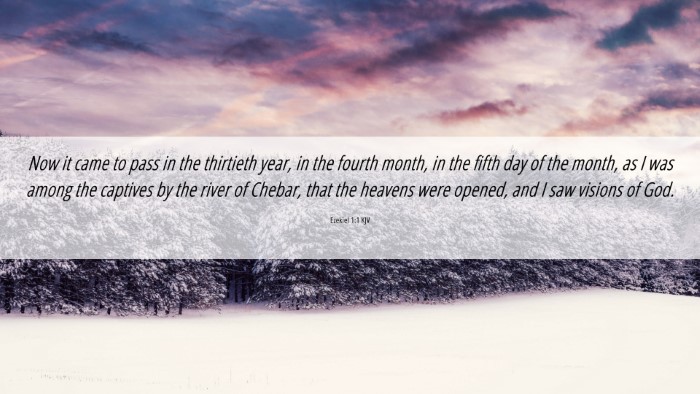 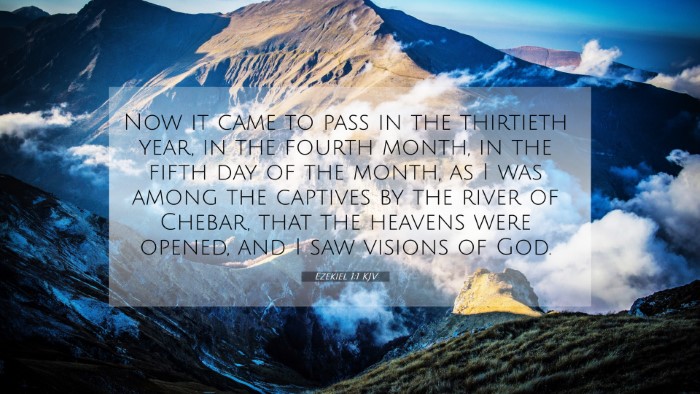 This cross-reference page section has been added with the hope of bringing in-depth meaning and understanding to the Scriptures. The cross references below can help identify similarities between Bible passages. The verses below have been identified in our system as verses related to Ezekiel 1:1 KJV. Please click on any image below to navigate to that specific Bible verse page. 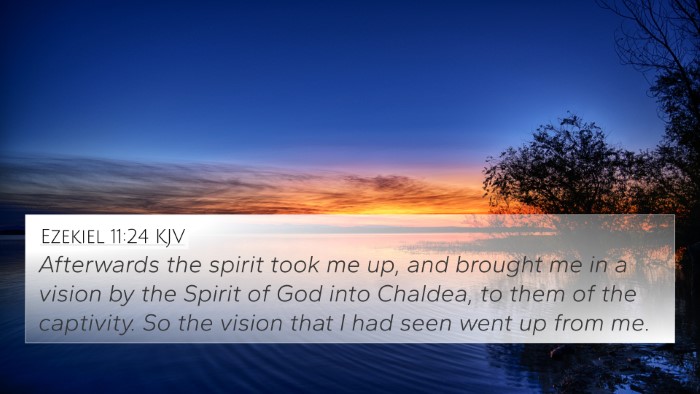 Ezekiel 11:24 (KJV) »
Afterwards the spirit took me up, and brought me in a vision by the Spirit of God into Chaldea, to them of the captivity. So the vision that I had seen went up from me. 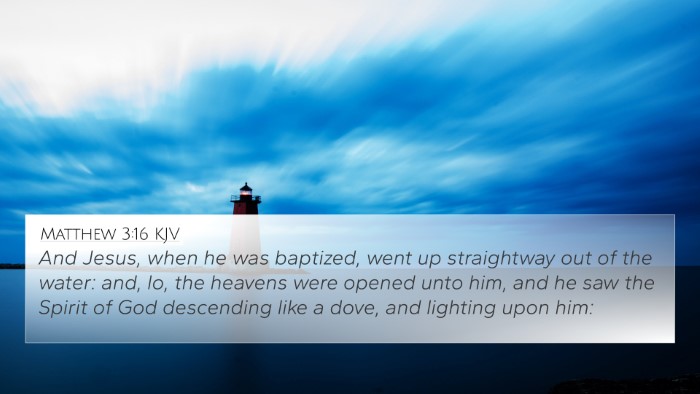 Matthew 3:16 (KJV) »
And Jesus, when he was baptized, went up straightway out of the water: and, lo, the heavens were opened unto him, and he saw the Spirit of God descending like a dove, and lighting upon him: 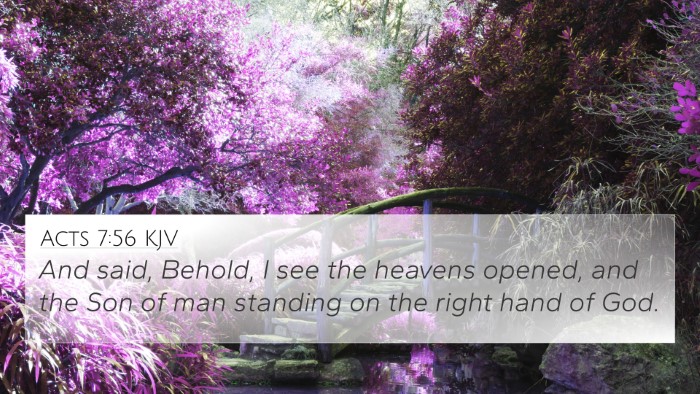 Acts 7:56 (KJV) »
And said, Behold, I see the heavens opened, and the Son of man standing on the right hand of God. 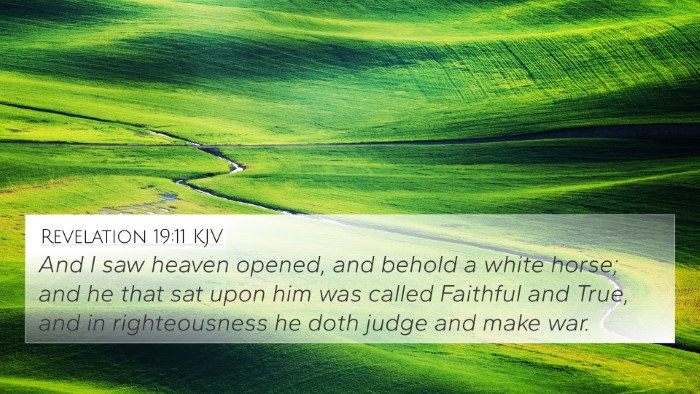 Revelation 19:11 (KJV) »
And I saw heaven opened, and behold a white horse; and he that sat upon him was called Faithful and True, and in righteousness he doth judge and make war. 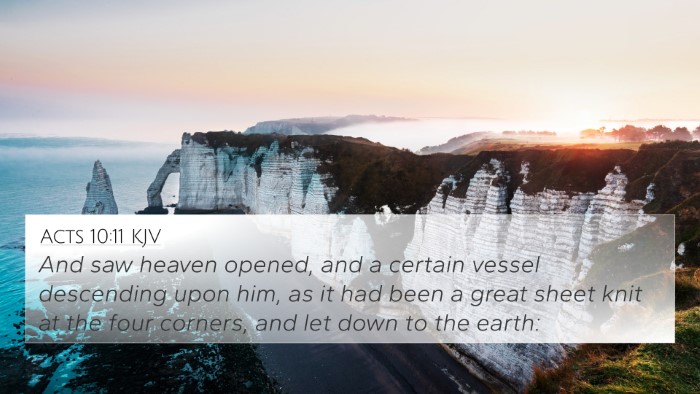 Acts 10:11 (KJV) »
And saw heaven opened, and a certain vessel descending upon him, as it had been a great sheet knit at the four corners, and let down to the earth: 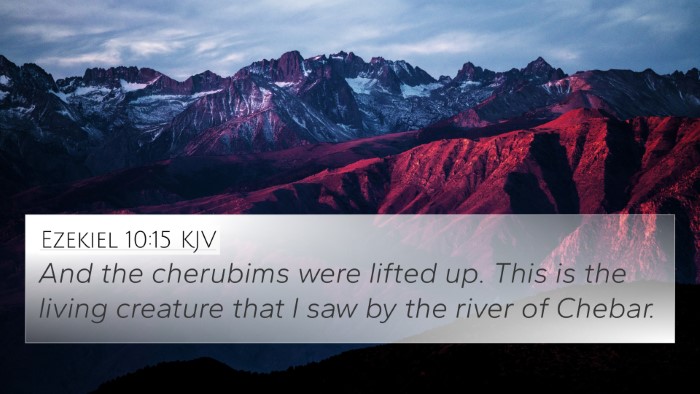 Ezekiel 10:15 (KJV) »
And the cherubims were lifted up. This is the living creature that I saw by the river of Chebar. 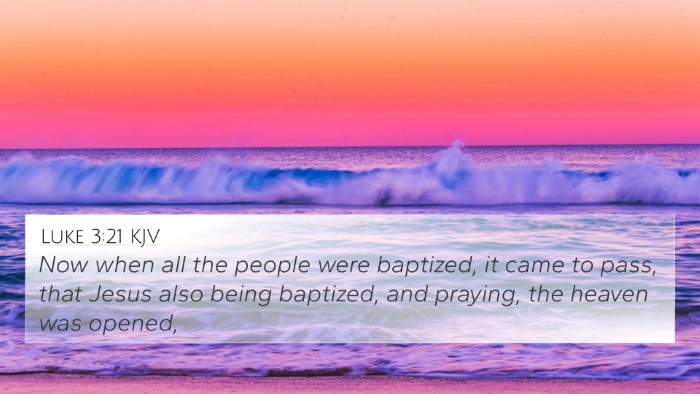 Luke 3:21 (KJV) »
Now when all the people were baptized, it came to pass, that Jesus also being baptized, and praying, the heaven was opened, 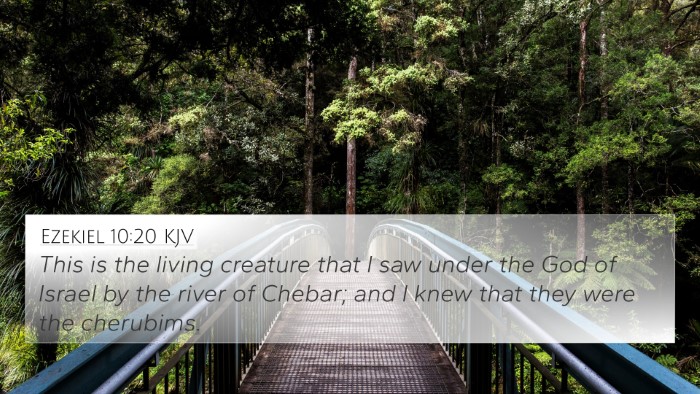 Ezekiel 10:20 (KJV) »
This is the living creature that I saw under the God of Israel by the river of Chebar; and I knew that they were the cherubims. 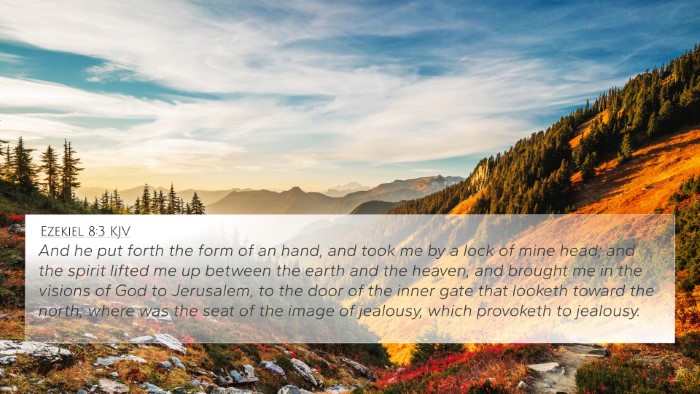 Ezekiel 8:3 (KJV) »
And he put forth the form of an hand, and took me by a lock of mine head; and the spirit lifted me up between the earth and the heaven, and brought me in the visions of God to Jerusalem, to the door of the inner gate that looketh toward the north; where was the seat of the image of jealousy, which provoketh to jealousy. 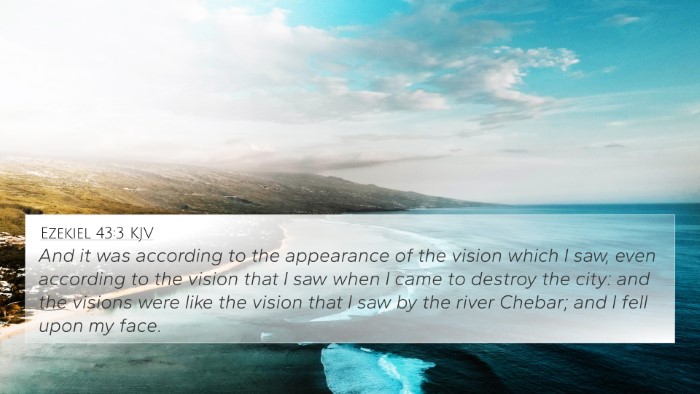 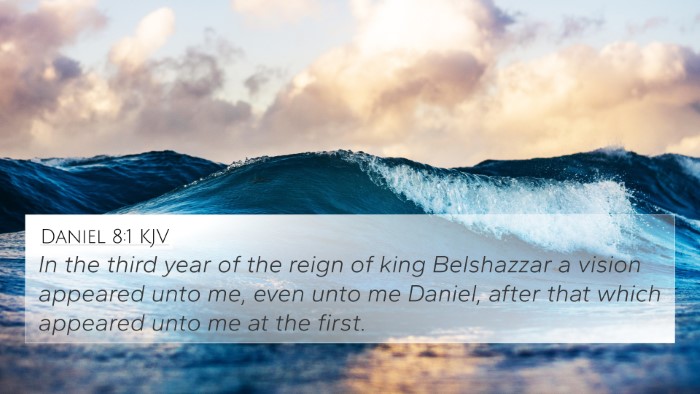 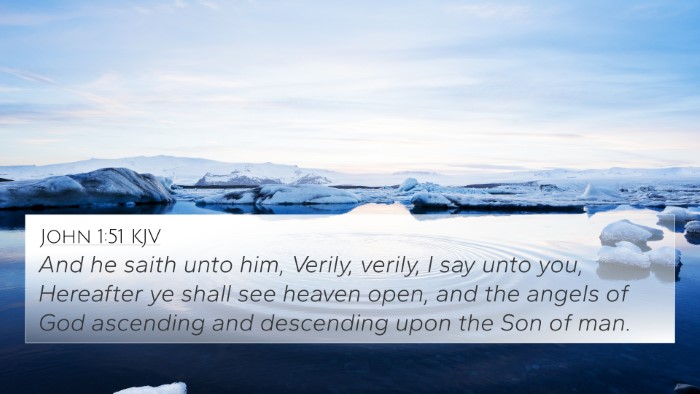 John 1:51 (KJV) »
And he saith unto him, Verily, verily, I say unto you, Hereafter ye shall see heaven open, and the angels of God ascending and descending upon the Son of man.