Best inspirational bible verses with beautiful images and backgrounds. Download Jeremiah 34:1 KJV Bible verse images and share with your friends and family on Instagram or any social media platform. You can also use the links below to click and share the Jeremiah 34:1 KJV Bible verse pictures on Facebook, Twitter, Pinterest, LinkedIn, WhatsApp and other social media websites. Scripture Images (https://www.scripture-images.com) offers a large collection of images with scripture quotes and inspirational bible verse pictures about Jesus, God, Love, Faith, Inspiration, Encouragement, Life, Hope, Strength and more. 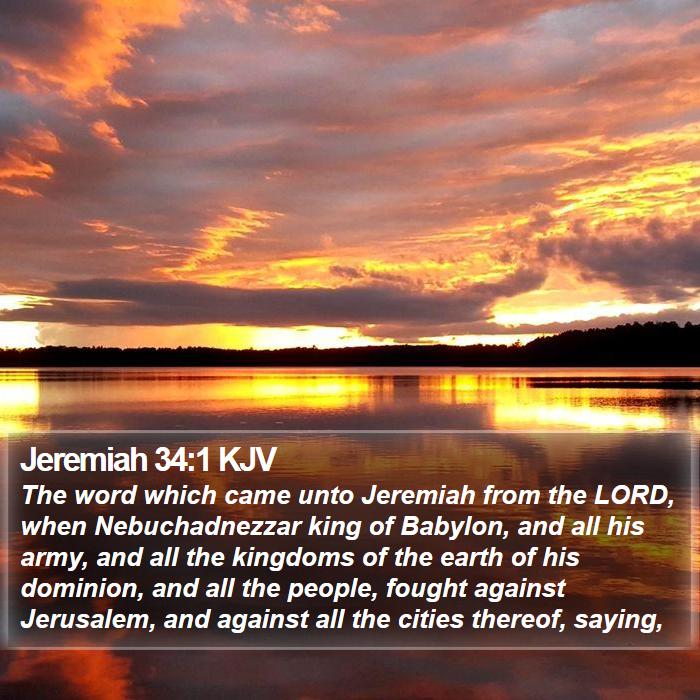 The word which came unto Jeremiah from the LORD, when Nebuchadnezzar king of Babylon, and all his army, and all the kingdoms of the earth of his dominion, and all the people, fought against Jerusalem, and against all the cities thereof, saying, 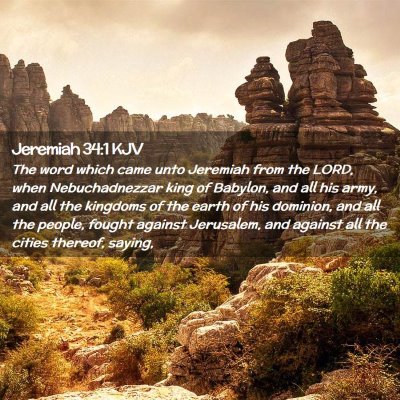 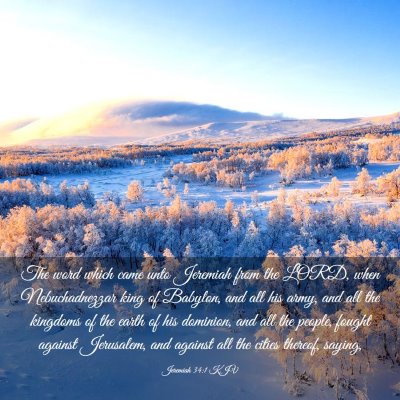 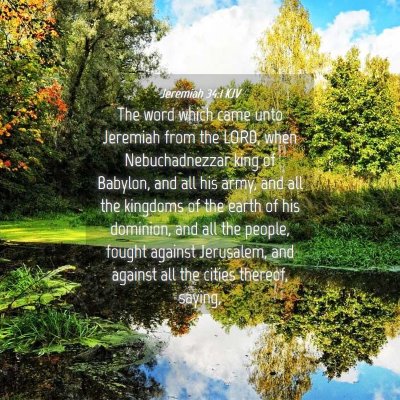 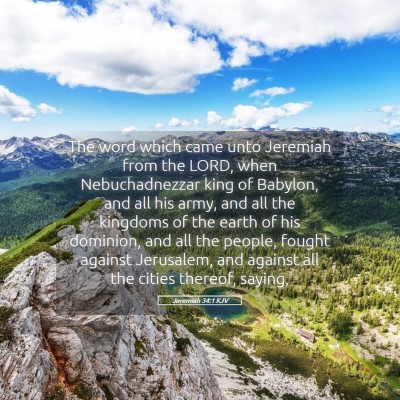 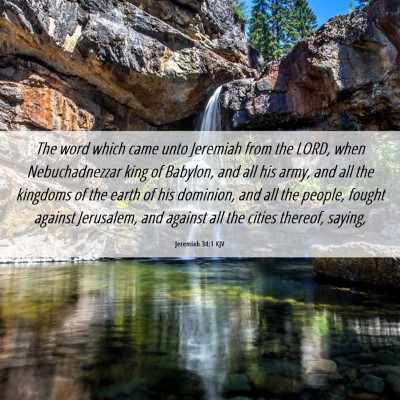 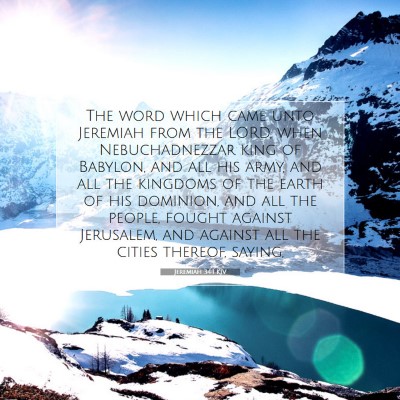 This cross-reference page section has been added with the hope of bringing in-depth meaning and understanding to the Scriptures. The cross references below can help identify similarities between Bible passages. The verses below have been identified in our system as verses related to Jeremiah 34:1 KJV. Please click on any image below to navigate to that specific Bible verse page. 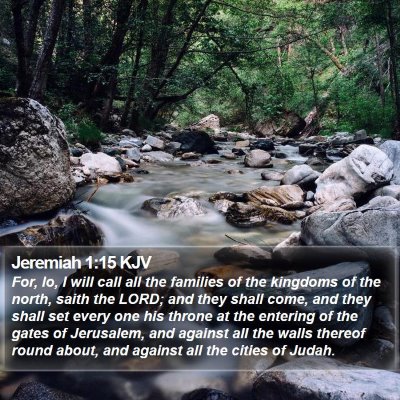 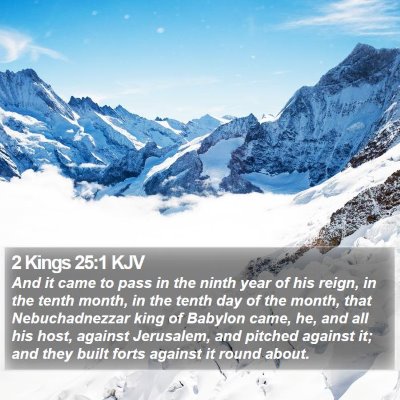 2 Kings 25:1 (KJV) »
And it came to pass in the ninth year of his reign, in the tenth month, in the tenth day of the month, that Nebuchadnezzar king of Babylon came, he, and all his host, against Jerusalem, and pitched against it; and they built forts against it round about. 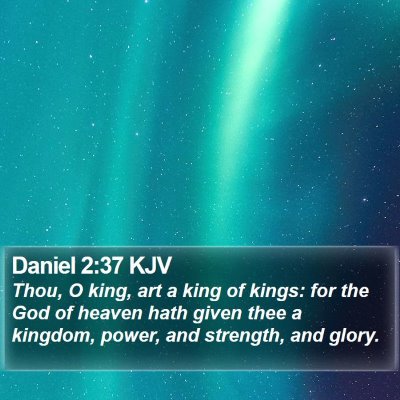 Daniel 2:37 (KJV) »
Thou, O king, art a king of kings: for the God of heaven hath given thee a kingdom, power, and strength, and glory. 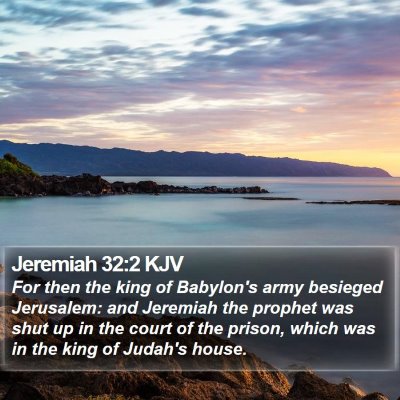 Jeremiah 32:2 (KJV) »
For then the king of Babylon's army besieged Jerusalem: and Jeremiah the prophet was shut up in the court of the prison, which was in the king of Judah's house. 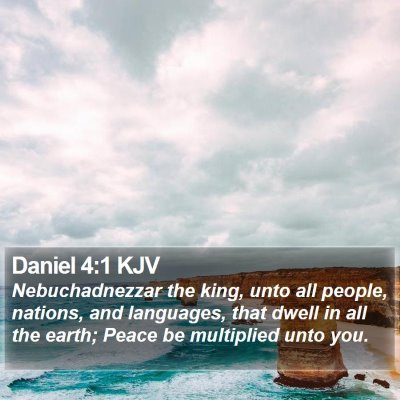 Daniel 4:1 (KJV) »
Nebuchadnezzar the king, unto all people, nations, and languages, that dwell in all the earth; Peace be multiplied unto you. 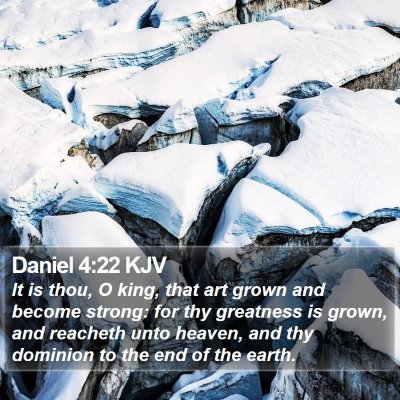 Daniel 4:22 (KJV) »
It is thou, O king, that art grown and become strong: for thy greatness is grown, and reacheth unto heaven, and thy dominion to the end of the earth. 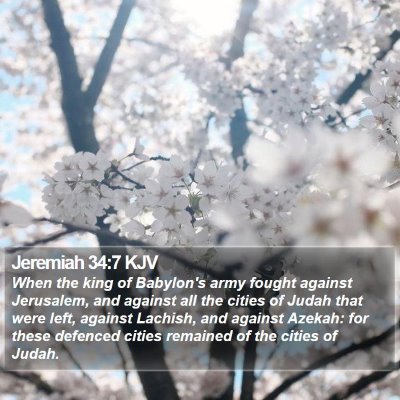 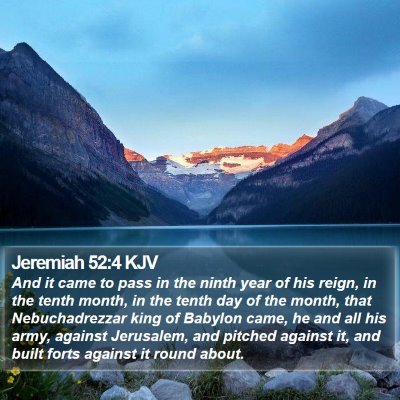 Jeremiah 52:4 (KJV) »
And it came to pass in the ninth year of his reign, in the tenth month, in the tenth day of the month, that Nebuchadrezzar king of Babylon came, he and all his army, against Jerusalem, and pitched against it, and built forts against it round about. 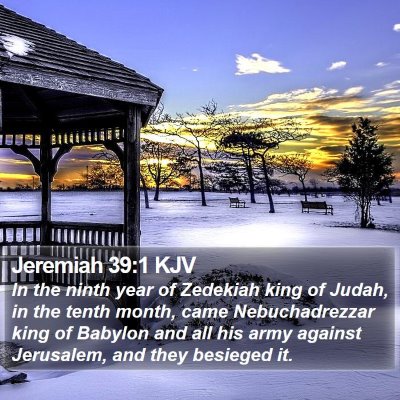 Jeremiah 39:1 (KJV) »
In the ninth year of Zedekiah king of Judah, in the tenth month, came Nebuchadrezzar king of Babylon and all his army against Jerusalem, and they besieged it. 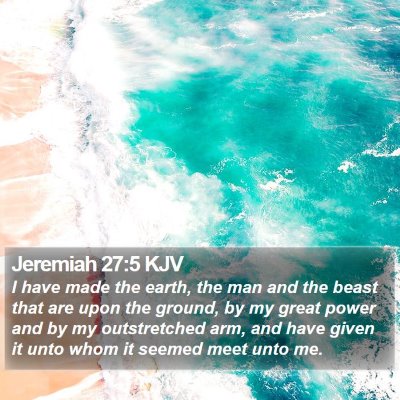 Jeremiah 27:5 (KJV) »
I have made the earth, the man and the beast that are upon the ground, by my great power and by my outstretched arm, and have given it unto whom it seemed meet unto me. 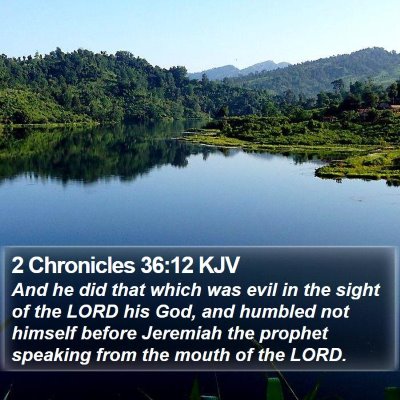 2 Chronicles 36:12 (KJV) »
And he did that which was evil in the sight of the LORD his God, and humbled not himself before Jeremiah the prophet speaking from the mouth of the LORD. 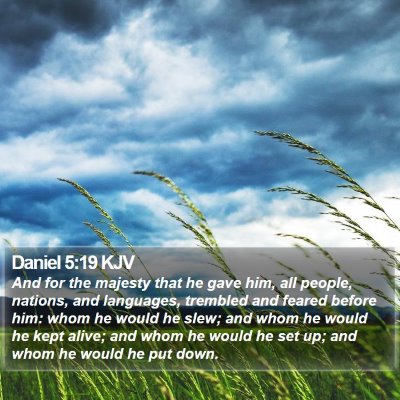