Best inspirational bible verses with beautiful images and backgrounds. Download Revelation 13:1 KJV Bible verse images and share with your friends and family on Instagram or any social media platform. You can also use the links below to click and share the Revelation 13:1 KJV Bible verse pictures on Facebook, Twitter, Pinterest, LinkedIn, WhatsApp and other social media websites. Scripture Images (https://www.scripture-images.com) offers a large collection of images with scripture quotes and inspirational bible verse pictures about Jesus, God, Love, Faith, Inspiration, Encouragement, Life, Hope, Strength and more. 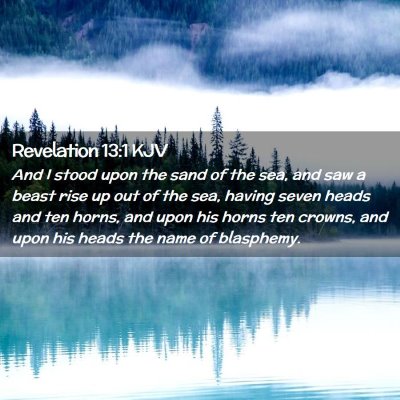 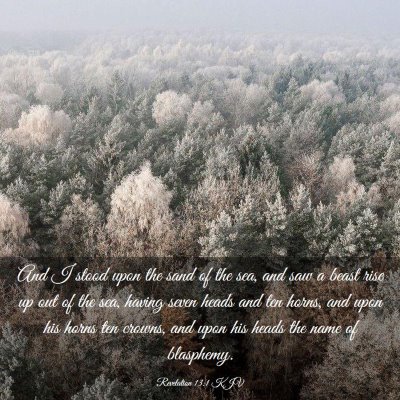 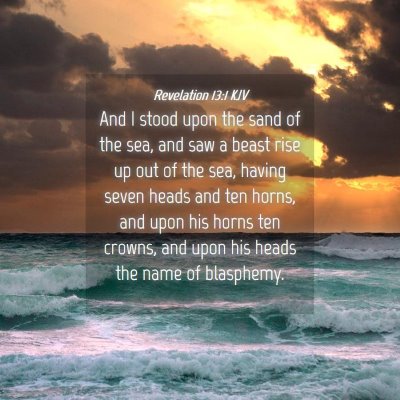 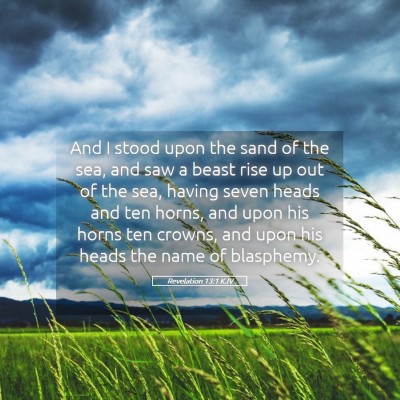 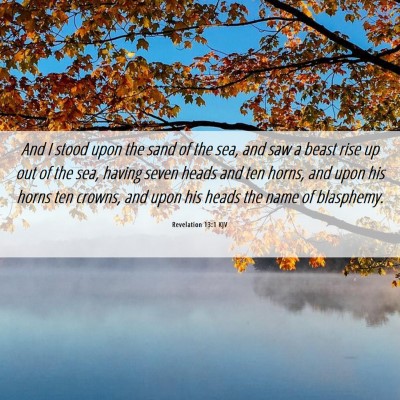 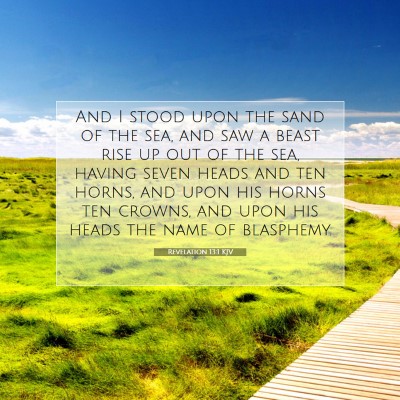 This cross-reference page section has been added with the hope of bringing in-depth meaning and understanding to the Scriptures. The cross references below can help identify similarities between Bible passages. The verses below have been identified in our system as verses related to Revelation 13:1 KJV. Please click on any image below to navigate to that specific Bible verse page. 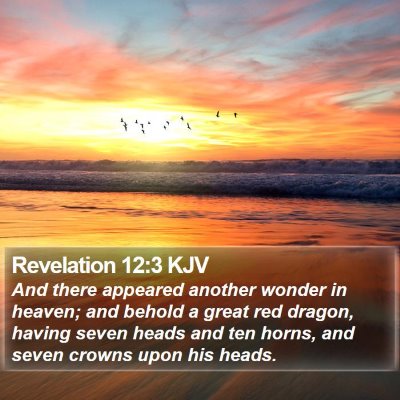 Revelation 12:3 (KJV) »
And there appeared another wonder in heaven; and behold a great red dragon, having seven heads and ten horns, and seven crowns upon his heads. 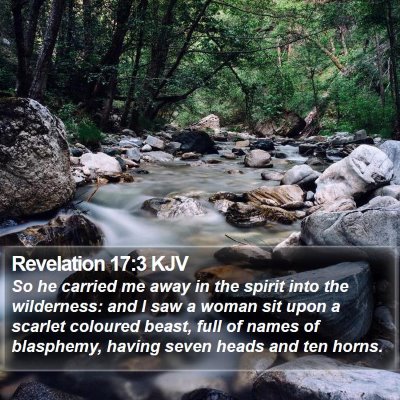 Revelation 17:3 (KJV) »
So he carried me away in the spirit into the wilderness: and I saw a woman sit upon a scarlet coloured beast, full of names of blasphemy, having seven heads and ten horns. 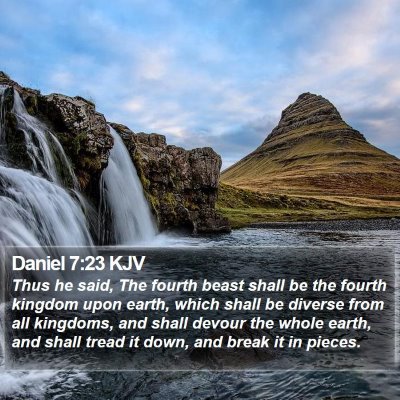 Daniel 7:23 (KJV) »
Thus he said, The fourth beast shall be the fourth kingdom upon earth, which shall be diverse from all kingdoms, and shall devour the whole earth, and shall tread it down, and break it in pieces. 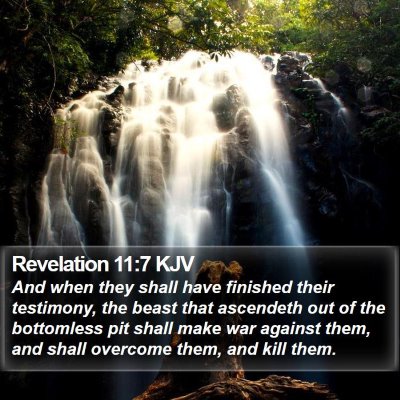 Revelation 11:7 (KJV) »
And when they shall have finished their testimony, the beast that ascendeth out of the bottomless pit shall make war against them, and shall overcome them, and kill them. 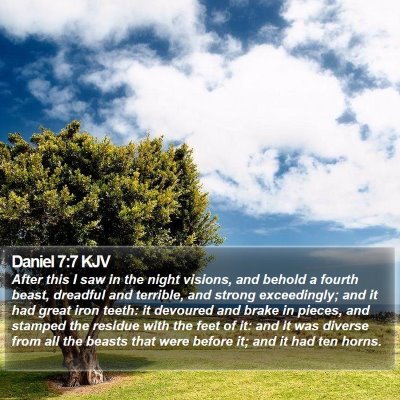 Daniel 7:7 (KJV) »
After this I saw in the night visions, and behold a fourth beast, dreadful and terrible, and strong exceedingly; and it had great iron teeth: it devoured and brake in pieces, and stamped the residue with the feet of it: and it was diverse from all the beasts that were before it; and it had ten horns. 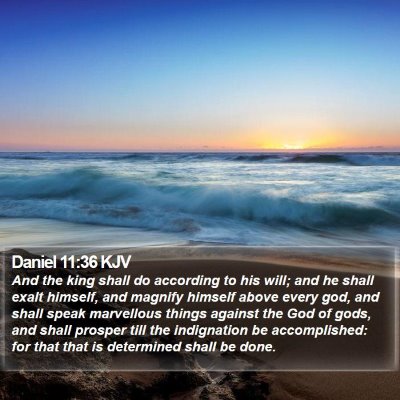 Daniel 11:36 (KJV) »
And the king shall do according to his will; and he shall exalt himself, and magnify himself above every god, and shall speak marvellous things against the God of gods, and shall prosper till the indignation be accomplished: for that that is determined shall be done. 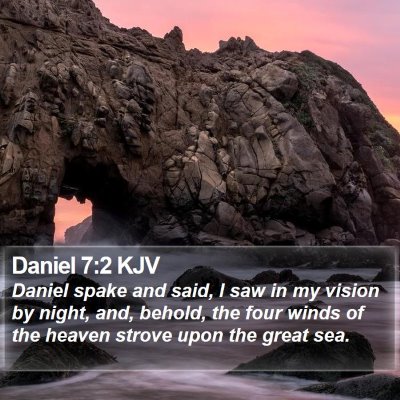 Daniel 7:2 (KJV) »
Daniel spake and said, I saw in my vision by night, and, behold, the four winds of the heaven strove upon the great sea. 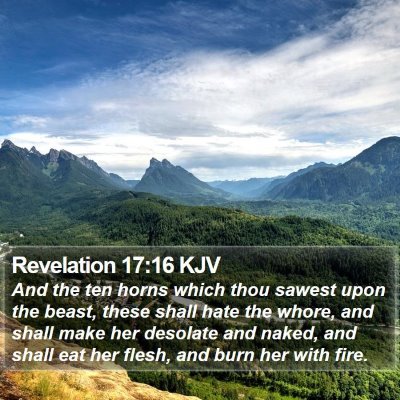 Revelation 17:16 (KJV) »
And the ten horns which thou sawest upon the beast, these shall hate the whore, and shall make her desolate and naked, and shall eat her flesh, and burn her with fire. 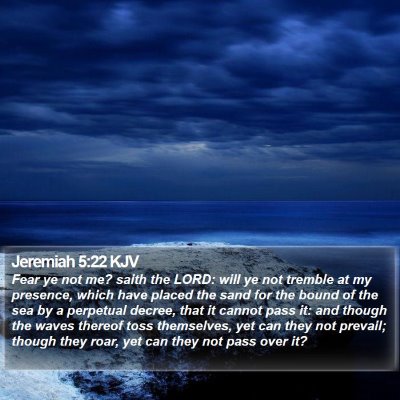 Jeremiah 5:22 (KJV) »
Fear ye not me? saith the LORD: will ye not tremble at my presence, which have placed the sand for the bound of the sea by a perpetual decree, that it cannot pass it: and though the waves thereof toss themselves, yet can they not prevail; though they roar, yet can they not pass over it? 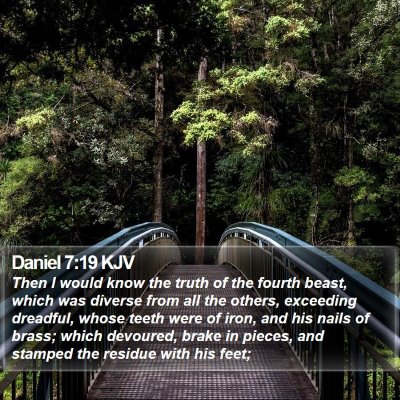 Daniel 7:19 (KJV) »
Then I would know the truth of the fourth beast, which was diverse from all the others, exceeding dreadful, whose teeth were of iron, and his nails of brass; which devoured, brake in pieces, and stamped the residue with his feet; 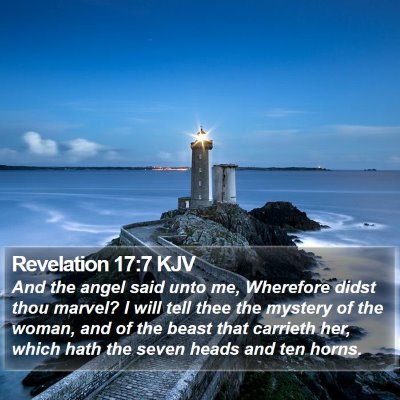 Revelation 17:7 (KJV) »
And the angel said unto me, Wherefore didst thou marvel? I will tell thee the mystery of the woman, and of the beast that carrieth her, which hath the seven heads and ten horns. 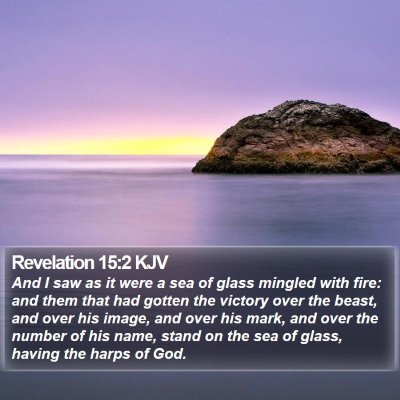 Revelation 15:2 (KJV) »
And I saw as it were a sea of glass mingled with fire: and them that had gotten the victory over the beast, and over his image, and over his mark, and over the number of his name, stand on the sea of glass, having the harps of God.