Best inspirational bible verses with beautiful images and backgrounds. Download Jude 1:11 WEB Bible verse images and share with your friends and family on Instagram or any social media platform. You can also use the links below to click and share the Jude 1:11 WEB Bible verse pictures on Facebook, Twitter, Pinterest, LinkedIn, WhatsApp and other social media websites. Scripture Images (https://www.scripture-images.com) offers a large collection of images with scripture quotes and inspirational bible verse pictures about Jesus, God, Love, Faith, Inspiration, Encouragement, Life, Hope, Strength and more. 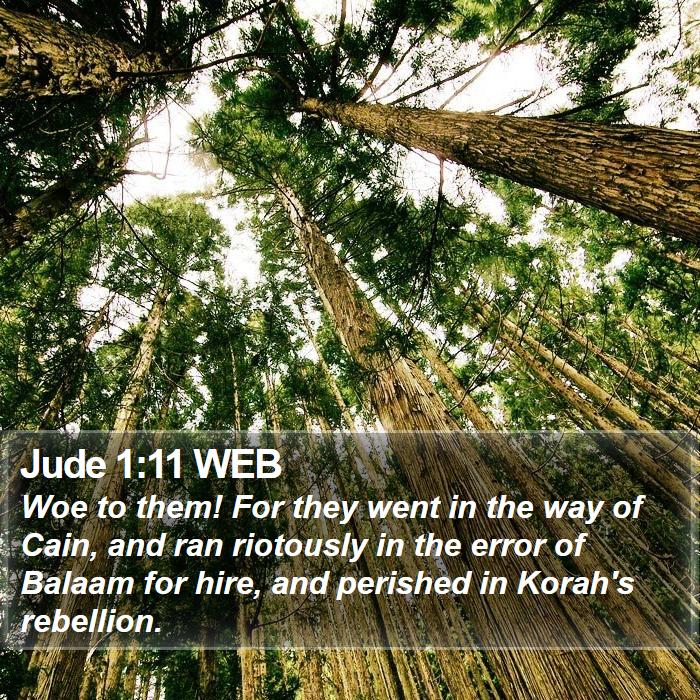 Woe to them! For they went in the way of Cain, and ran riotously in the error of Balaam for hire, and perished in Korah's rebellion. 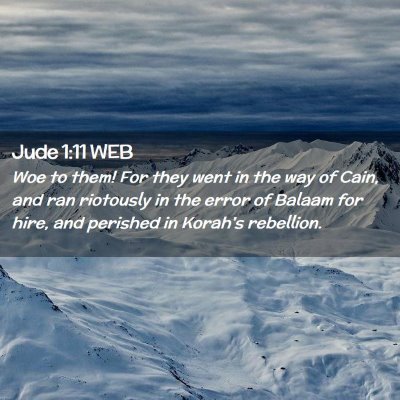 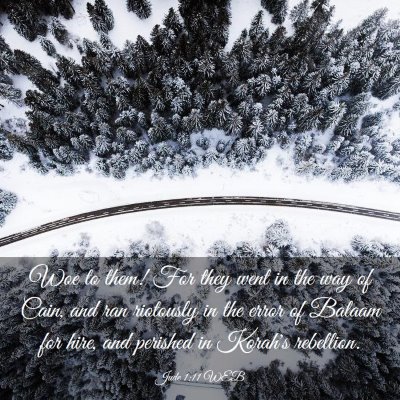 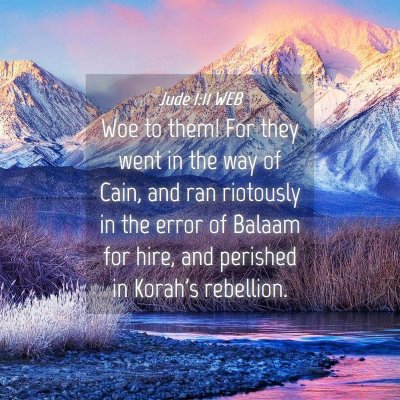 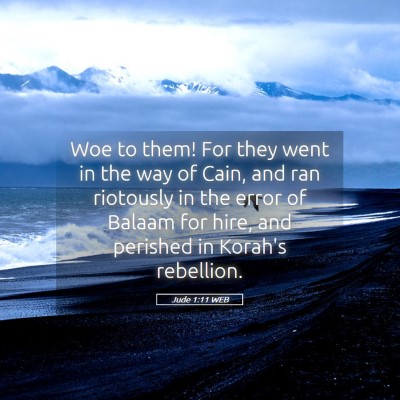 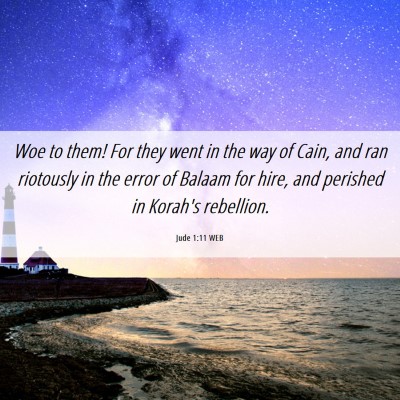 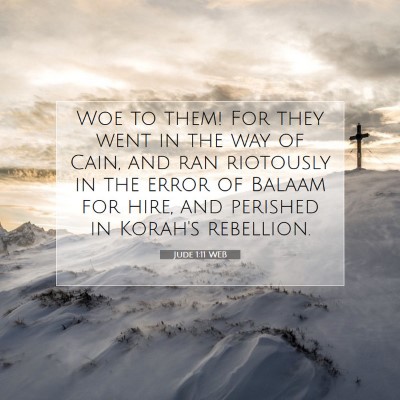 This cross-reference page section has been added with the hope of bringing in-depth meaning and understanding to the Scriptures. The cross references below can help identify similarities between Bible passages. The verses below have been identified in our system as verses related to Jude 1:11 WEB. Please click on any image below to navigate to that specific Bible verse page. 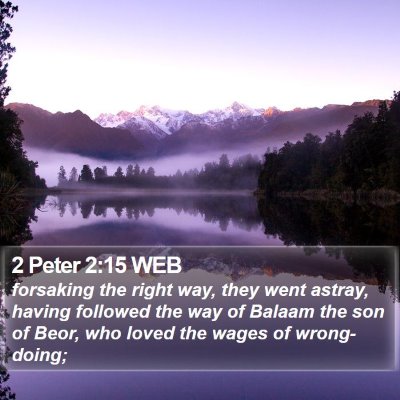 2 Peter 2:15 (WEB) »
forsaking the right way, they went astray, having followed the way of Balaam the son of Beor, who loved the wages of wrong-doing; 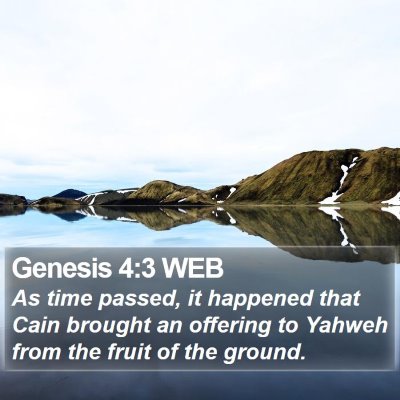 Genesis 4:3 (WEB) »
As time passed, it happened that Cain brought an offering to Yahweh from the fruit of the ground. 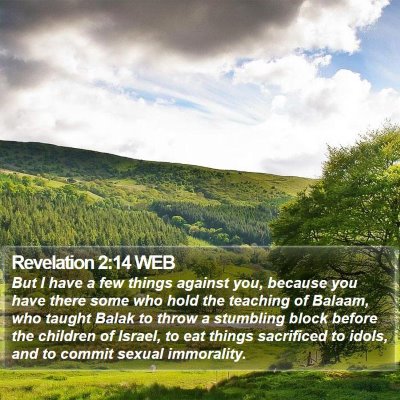 Revelation 2:14 (WEB) »
But I have a few things against you, because you have there some who hold the teaching of Balaam, who taught Balak to throw a stumbling block before the children of Israel, to eat things sacrificed to idols, and to commit sexual immorality. 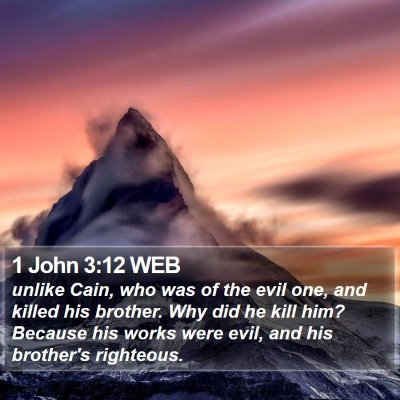 1 John 3:12 (WEB) »
unlike Cain, who was of the evil one, and killed his brother. Why did he kill him? Because his works were evil, and his brother's righteous. 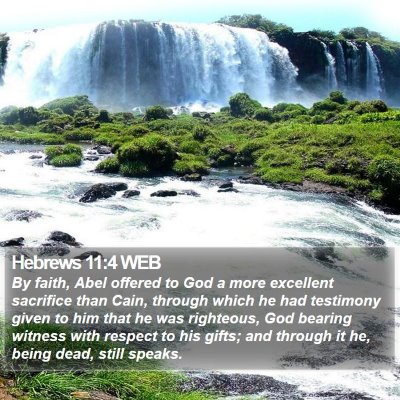 Hebrews 11:4 (WEB) »
By faith, Abel offered to God a more excellent sacrifice than Cain, through which he had testimony given to him that he was righteous, God bearing witness with respect to his gifts; and through it he, being dead, still speaks. 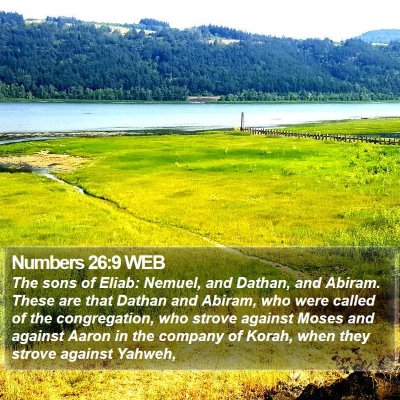 Numbers 26:9 (WEB) »
The sons of Eliab: Nemuel, and Dathan, and Abiram. These are that Dathan and Abiram, who were called of the congregation, who strove against Moses and against Aaron in the company of Korah, when they strove against Yahweh, 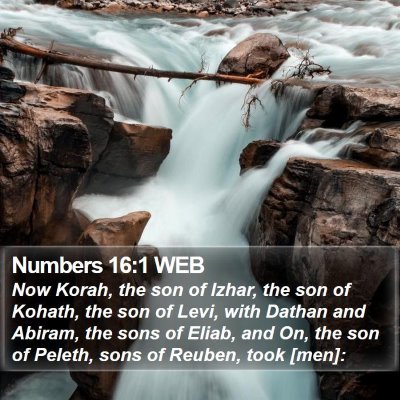 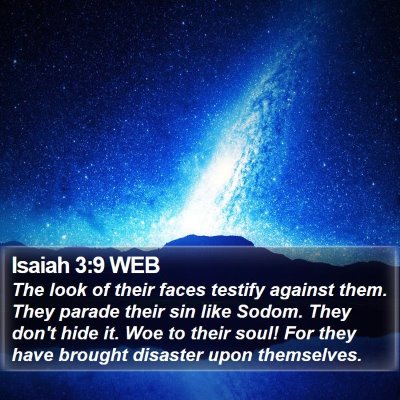 Isaiah 3:9 (WEB) »
The look of their faces testify against them. They parade their sin like Sodom. They don't hide it. Woe to their soul! For they have brought disaster upon themselves. 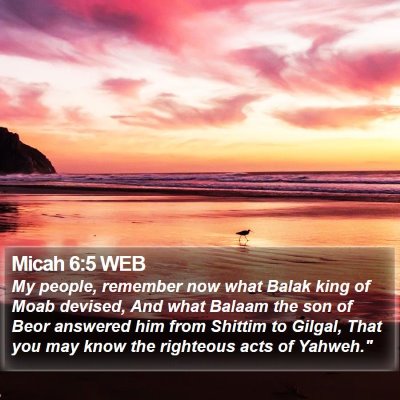 Micah 6:5 (WEB) »
My people, remember now what Balak king of Moab devised, And what Balaam the son of Beor answered him from Shittim to Gilgal, That you may know the righteous acts of Yahweh." 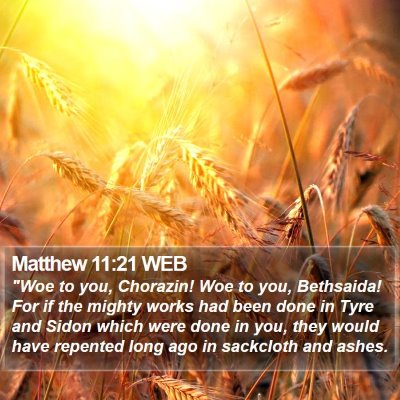 Matthew 11:21 (WEB) »
"Woe to you, Chorazin! Woe to you, Bethsaida! For if the mighty works had been done in Tyre and Sidon which were done in you, they would have repented long ago in sackcloth and ashes. 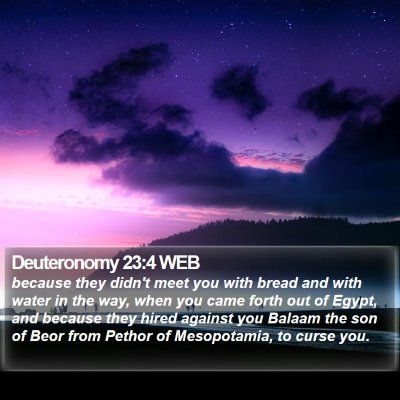 Deuteronomy 23:4 (WEB) »
because they didn't meet you with bread and with water in the way, when you came forth out of Egypt, and because they hired against you Balaam the son of Beor from Pethor of Mesopotamia, to curse you. 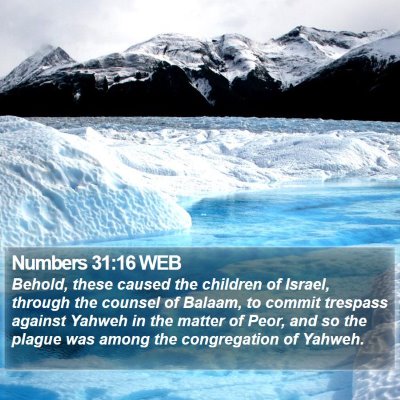 Numbers 31:16 (WEB) »
Behold, these caused the children of Israel, through the counsel of Balaam, to commit trespass against Yahweh in the matter of Peor, and so the plague was among the congregation of Yahweh.