Christian 4K Wallpapers with inspirational Bible verse quotes on beautiful images and backgrounds. Download Jeremiah 35:1 ASV ultra hd wallpapers with Bible verses and share with your friends and family on Instagram or any social media platform. You can also use the links below to click and share the Jeremiah 35:1 ASV 4k backgrounds on Facebook, Twitter, Pinterest, LinkedIn, WhatsApp and other social media websites. Scripture Images (https://www.scripture-images.com) offers a large collection of UHD Christian wallpapers 3840x2160 and background images with Scripture quotes. 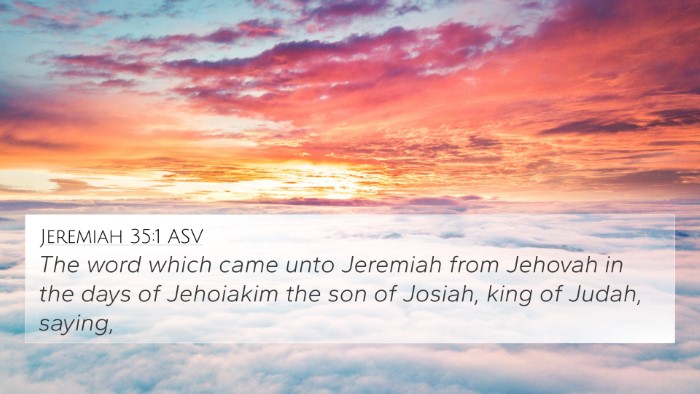 The word which came unto Jeremiah from Jehovah in the days of Jehoiakim the son of Josiah, king of Judah, saying, 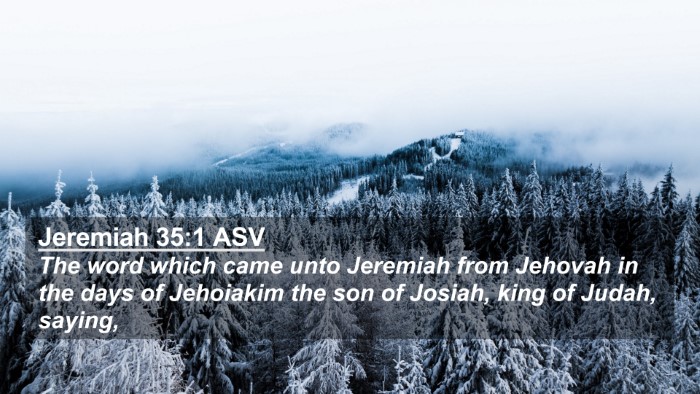 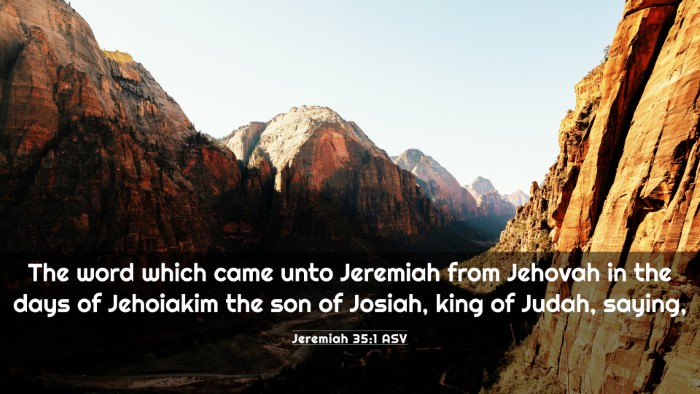 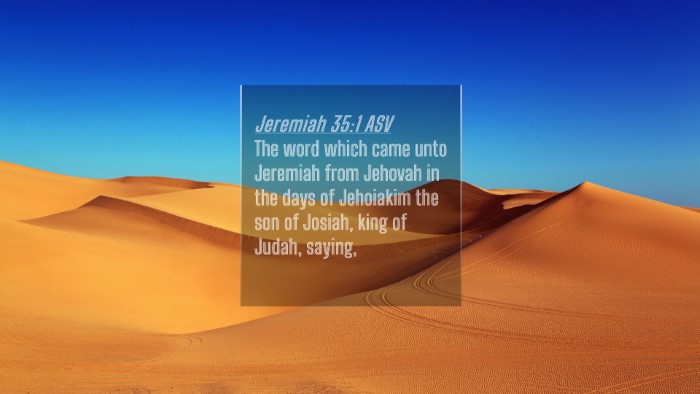 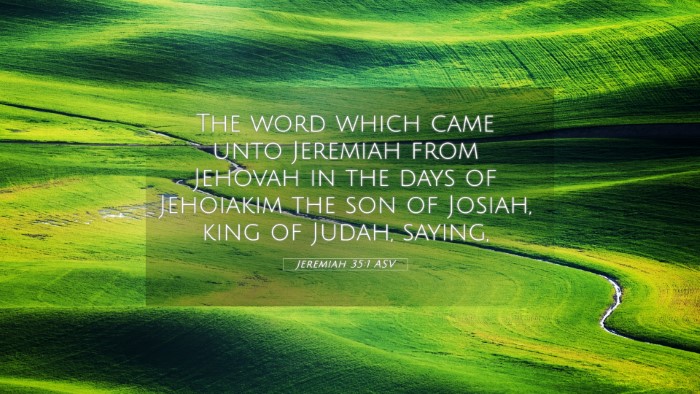 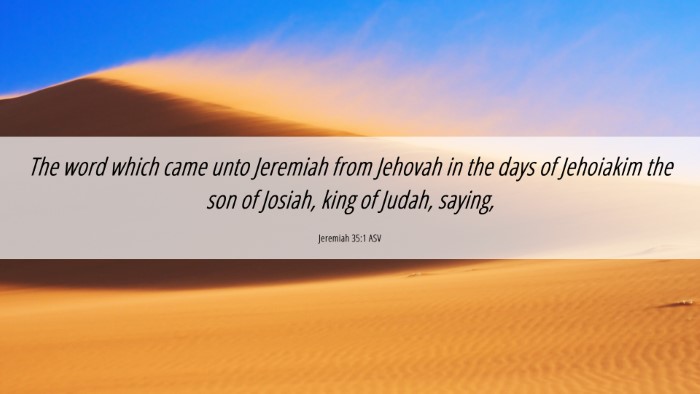 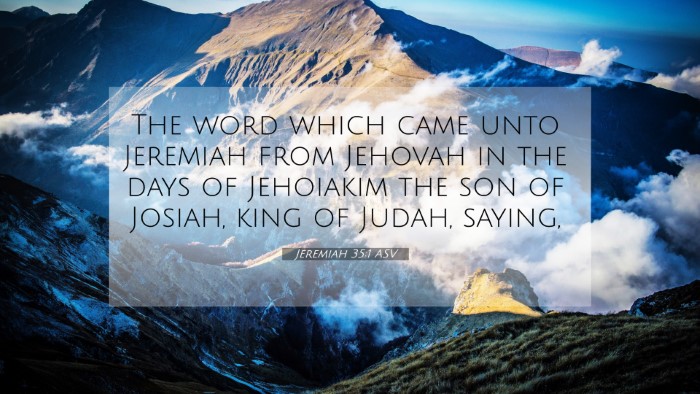 This cross-reference page section has been added with the hope of bringing in-depth meaning and understanding to the Scriptures. The cross references below can help identify similarities between Bible passages. The verses below have been identified in our system as verses related to Jeremiah 35:1 ASV. Please click on any image below to navigate to that specific Bible verse page. 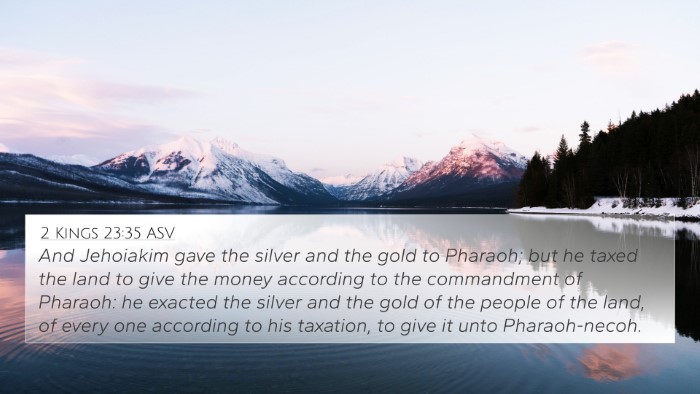 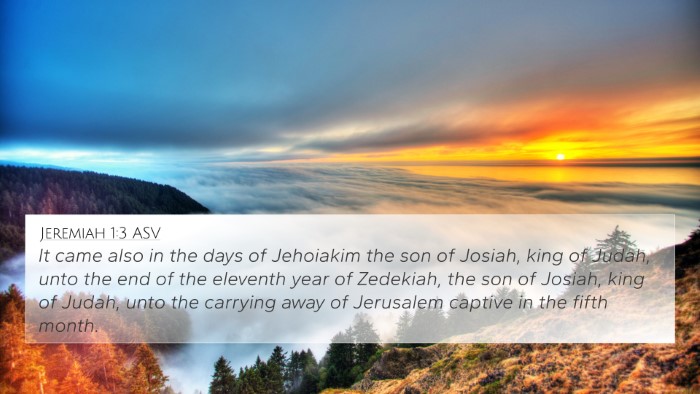 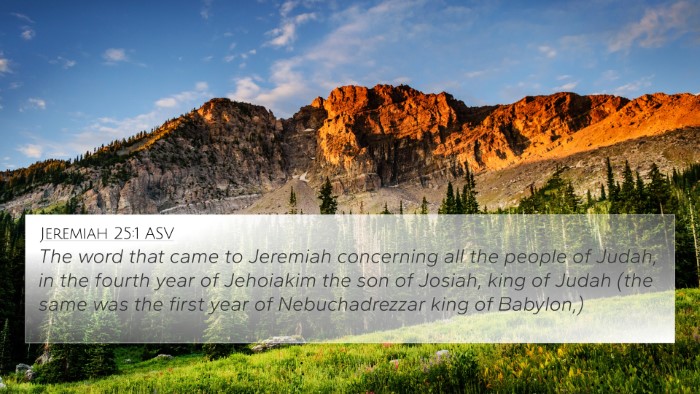 Jeremiah 25:1 (ASV) »
The word that came to Jeremiah concerning all the people of Judah, in the fourth year of Jehoiakim the son of Josiah, king of Judah (the same was the first year of Nebuchadrezzar king of Babylon,) 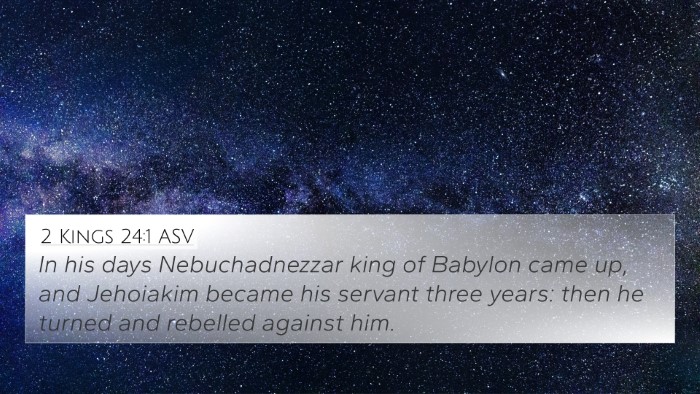 2 Kings 24:1 (ASV) »
In his days Nebuchadnezzar king of Babylon came up, and Jehoiakim became his servant three years: then he turned and rebelled against him. 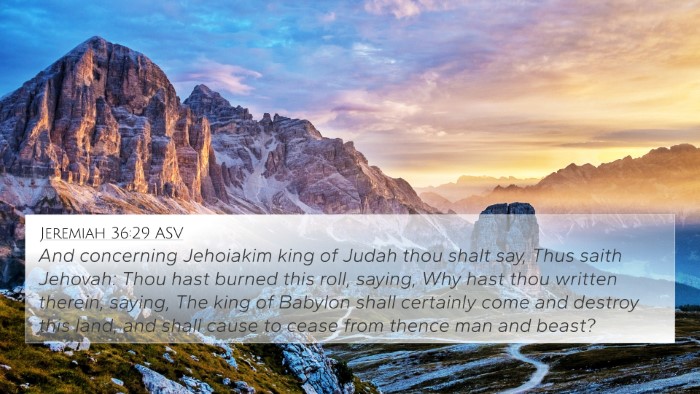 Jeremiah 36:29 (ASV) »
And concerning Jehoiakim king of Judah thou shalt say, Thus saith Jehovah: Thou hast burned this roll, saying, Why hast thou written therein, saying, The king of Babylon shall certainly come and destroy this land, and shall cause to cease from thence man and beast? 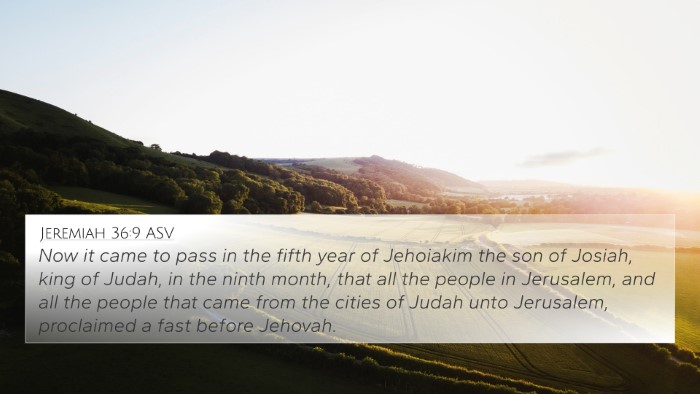 Jeremiah 36:9 (ASV) »
Now it came to pass in the fifth year of Jehoiakim the son of Josiah, king of Judah, in the ninth month, that all the people in Jerusalem, and all the people that came from the cities of Judah unto Jerusalem, proclaimed a fast before Jehovah. 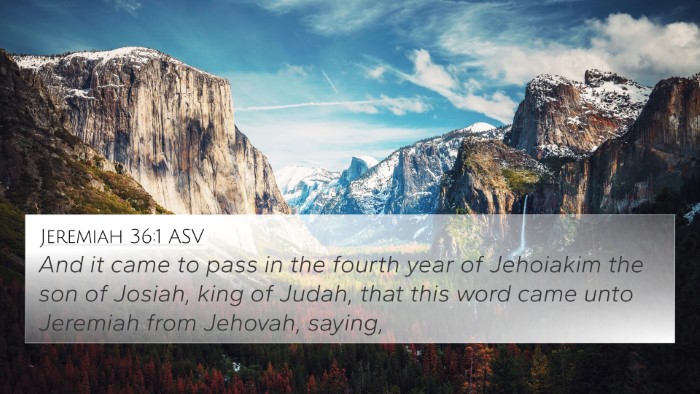 Jeremiah 36:1 (ASV) »
And it came to pass in the fourth year of Jehoiakim the son of Josiah, king of Judah, that this word came unto Jeremiah from Jehovah, saying, 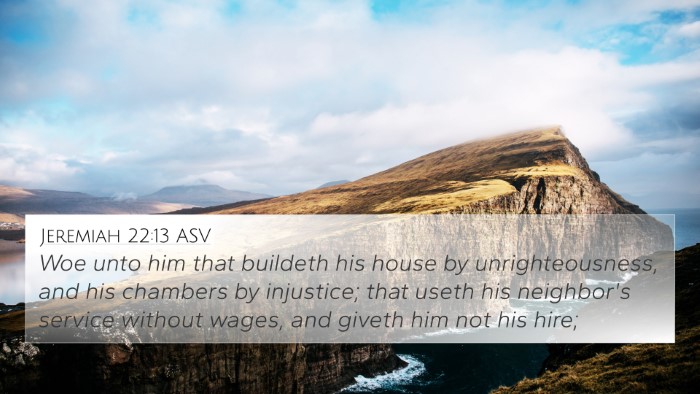 Jeremiah 22:13 (ASV) »
Woe unto him that buildeth his house by unrighteousness, and his chambers by injustice; that useth his neighbor's service without wages, and giveth him not his hire; 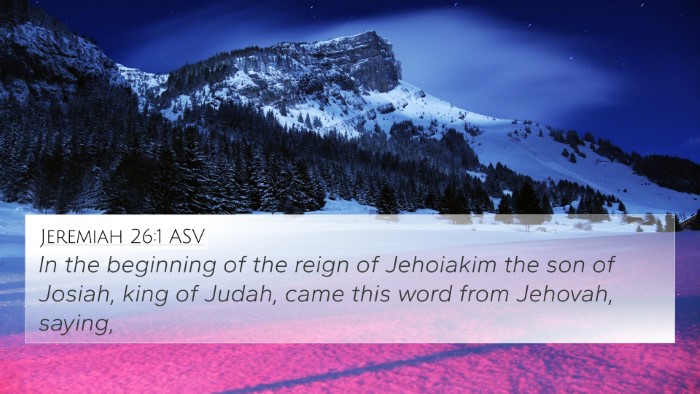 Jeremiah 26:1 (ASV) »
In the beginning of the reign of Jehoiakim the son of Josiah, king of Judah, came this word from Jehovah, saying, 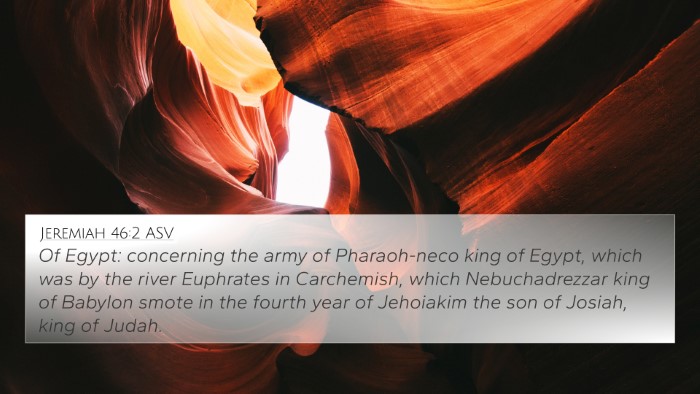 Jeremiah 46:2 (ASV) »
Of Egypt: concerning the army of Pharaoh-neco king of Egypt, which was by the river Euphrates in Carchemish, which Nebuchadrezzar king of Babylon smote in the fourth year of Jehoiakim the son of Josiah, king of Judah. 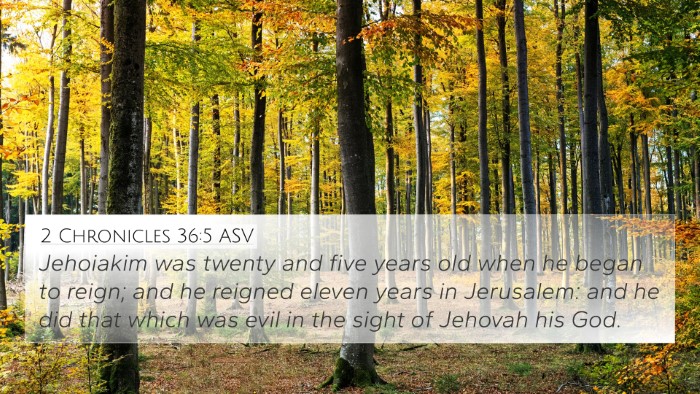 2 Chronicles 36:5 (ASV) »
Jehoiakim was twenty and five years old when he began to reign; and he reigned eleven years in Jerusalem: and he did that which was evil in the sight of Jehovah his God. 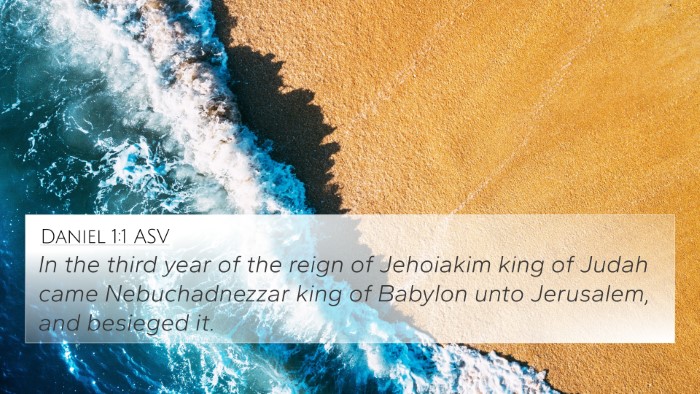 Daniel 1:1 (ASV) »
In the third year of the reign of Jehoiakim king of Judah came Nebuchadnezzar king of Babylon unto Jerusalem, and besieged it.