Christian 4K Wallpapers with inspirational Bible verse quotes on beautiful images and backgrounds. Download 1 Samuel 31:2 KJV ultra hd wallpapers with Bible verses and share with your friends and family on Instagram or any social media platform. You can also use the links below to click and share the 1 Samuel 31:2 KJV 4k backgrounds on Facebook, Twitter, Pinterest, LinkedIn, WhatsApp and other social media websites. Scripture Images (https://www.scripture-images.com) offers a large collection of UHD Christian wallpapers 3840x2160 and background images with Scripture quotes. 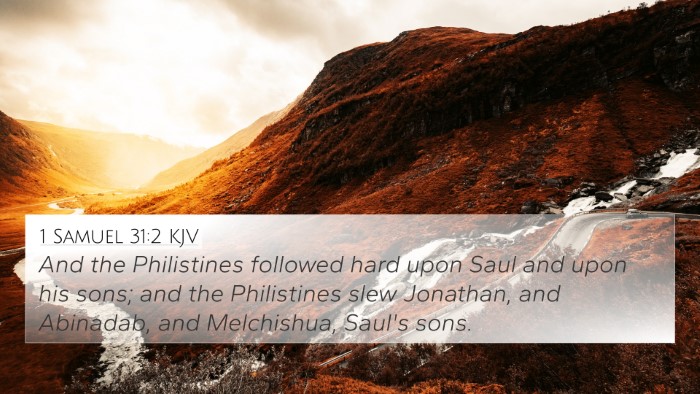 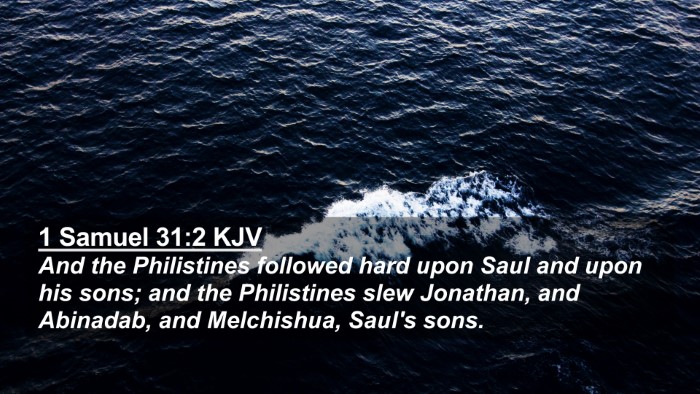 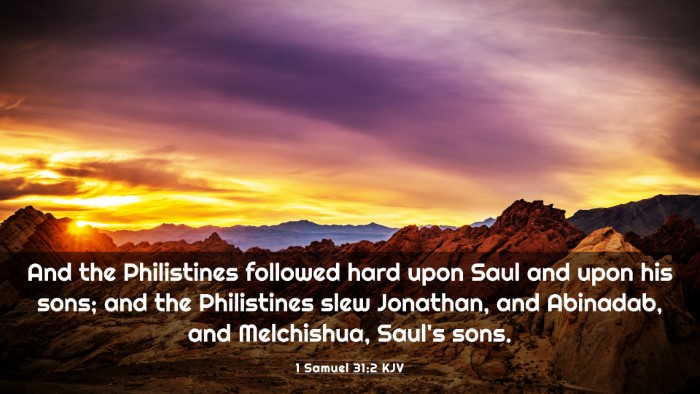 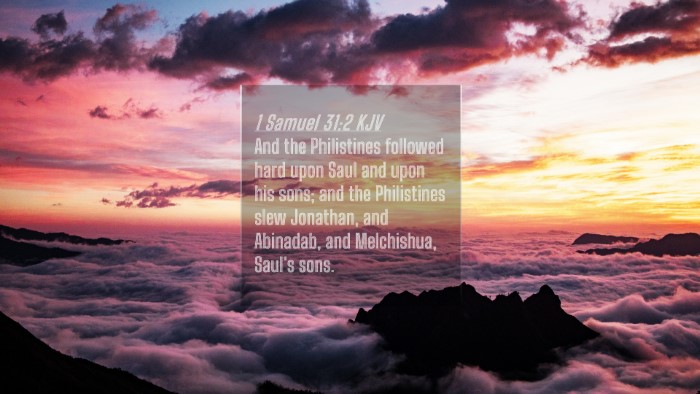 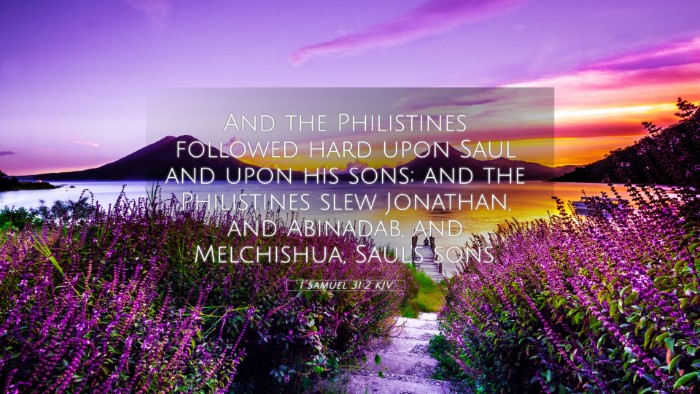 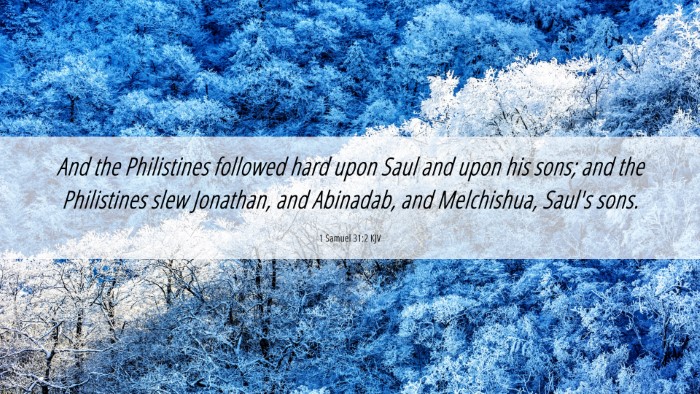 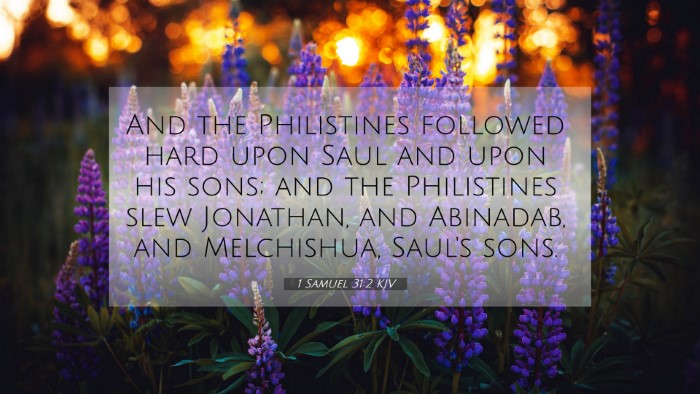 This cross-reference page section has been added with the hope of bringing in-depth meaning and understanding to the Scriptures. The cross references below can help identify similarities between Bible passages. The verses below have been identified in our system as verses related to 1 Samuel 31:2 KJV. Please click on any image below to navigate to that specific Bible verse page. 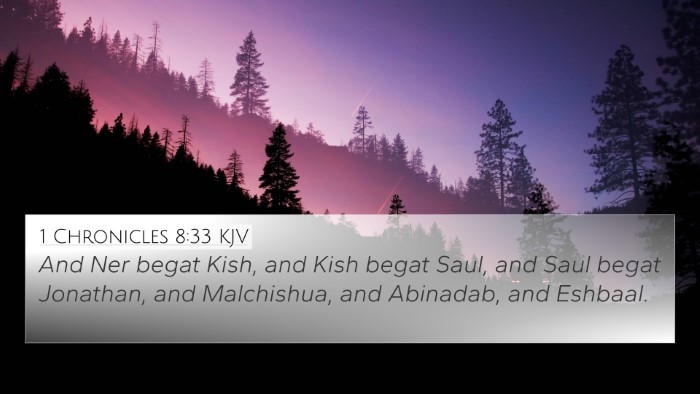 1 Chronicles 8:33 (KJV) »
And Ner begat Kish, and Kish begat Saul, and Saul begat Jonathan, and Malchishua, and Abinadab, and Eshbaal. 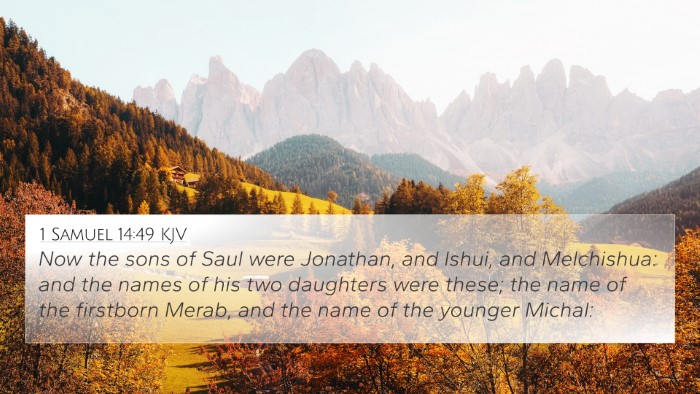 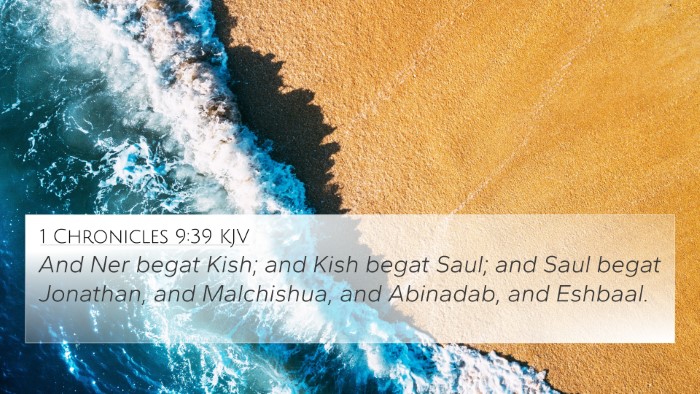 1 Chronicles 9:39 (KJV) »
And Ner begat Kish; and Kish begat Saul; and Saul begat Jonathan, and Malchishua, and Abinadab, and Eshbaal. 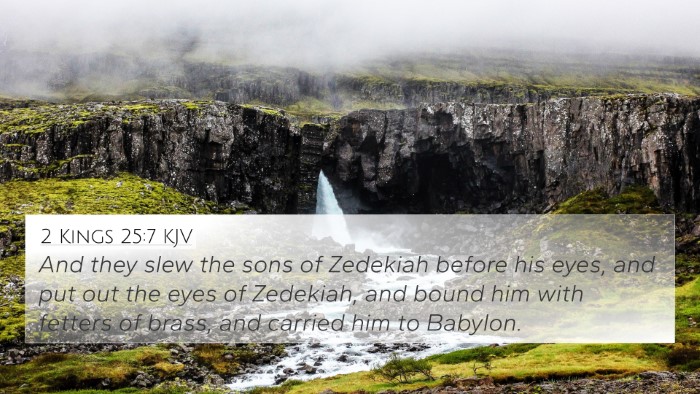 2 Kings 25:7 (KJV) »
And they slew the sons of Zedekiah before his eyes, and put out the eyes of Zedekiah, and bound him with fetters of brass, and carried him to Babylon. 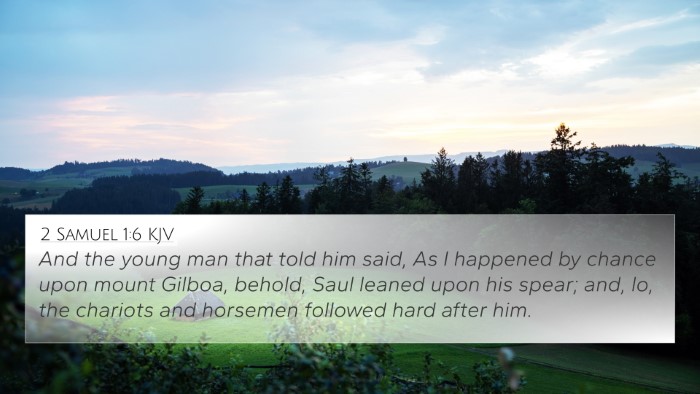 2 Samuel 1:6 (KJV) »
And the young man that told him said, As I happened by chance upon mount Gilboa, behold, Saul leaned upon his spear; and, lo, the chariots and horsemen followed hard after him. 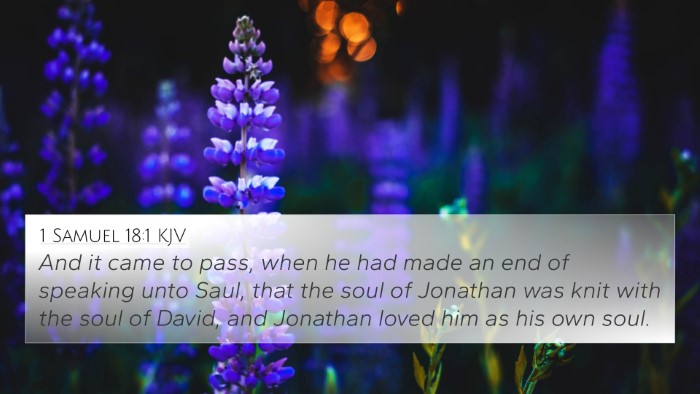 1 Samuel 18:1 (KJV) »
And it came to pass, when he had made an end of speaking unto Saul, that the soul of Jonathan was knit with the soul of David, and Jonathan loved him as his own soul. 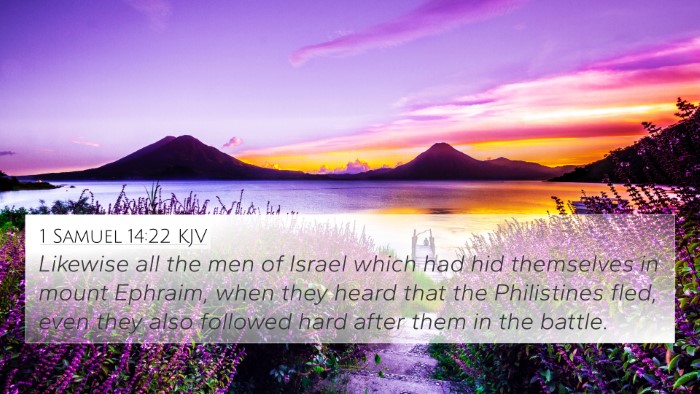 1 Samuel 14:22 (KJV) »
Likewise all the men of Israel which had hid themselves in mount Ephraim, when they heard that the Philistines fled, even they also followed hard after them in the battle. 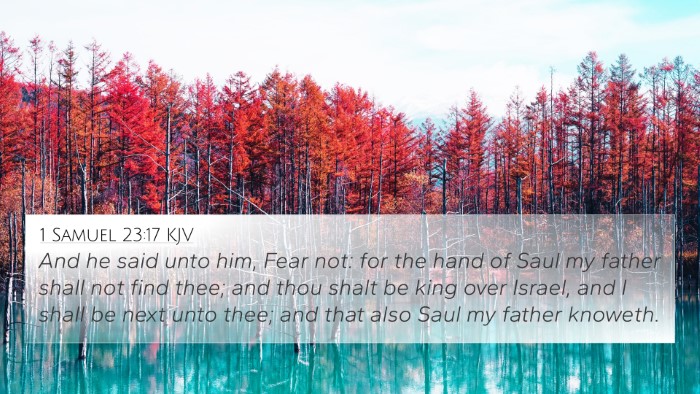 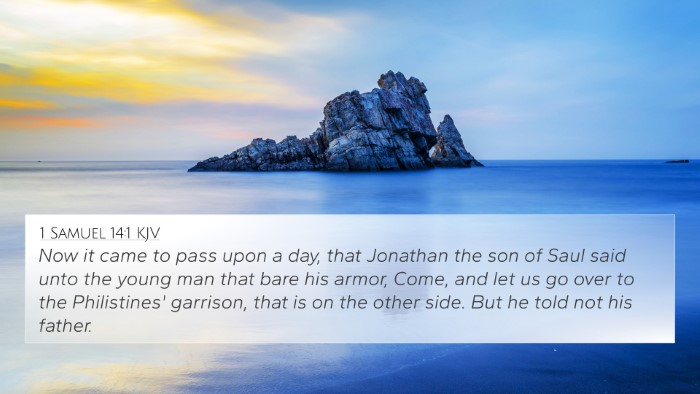 1 Samuel 14:1 (KJV) »
Now it came to pass upon a day, that Jonathan the son of Saul said unto the young man that bare his armor, Come, and let us go over to the Philistines' garrison, that is on the other side. But he told not his father. 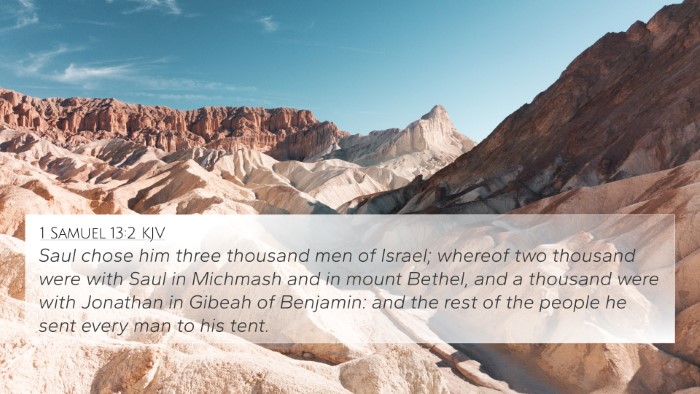 1 Samuel 13:2 (KJV) »
Saul chose him three thousand men of Israel; whereof two thousand were with Saul in Michmash and in mount Bethel, and a thousand were with Jonathan in Gibeah of Benjamin: and the rest of the people he sent every man to his tent. 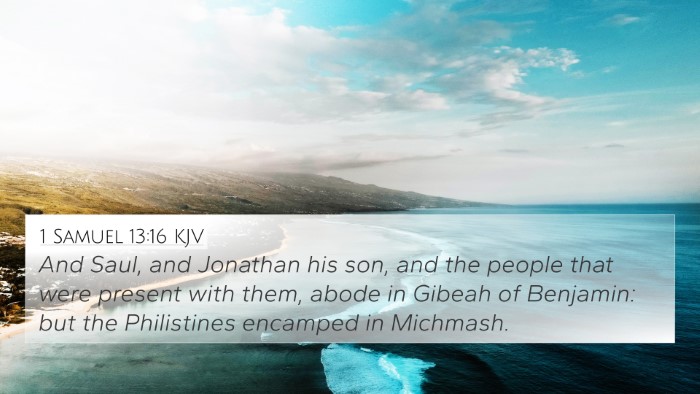 1 Samuel 13:16 (KJV) »
And Saul, and Jonathan his son, and the people that were present with them, abode in Gibeah of Benjamin: but the Philistines encamped in Michmash. 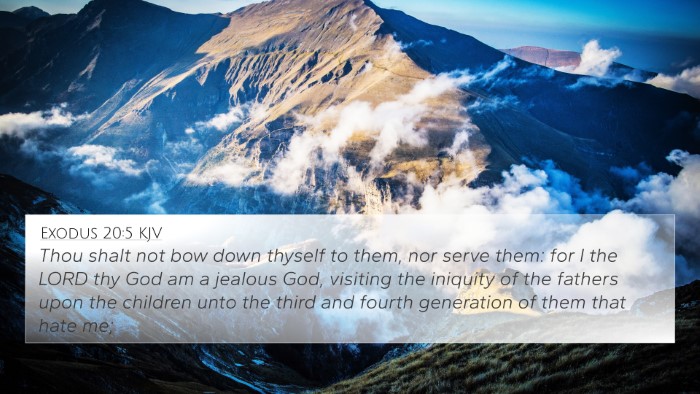 Exodus 20:5 (KJV) »
Thou shalt not bow down thyself to them, nor serve them: for I the LORD thy God am a jealous God, visiting the iniquity of the fathers upon the children unto the third and fourth generation of them that hate me;