Christian 4K Wallpapers with inspirational Bible verse quotes on beautiful images and backgrounds. Download Acts 19:8 KJV ultra hd wallpapers with Bible verses and share with your friends and family on Instagram or any social media platform. You can also use the links below to click and share the Acts 19:8 KJV 4k backgrounds on Facebook, Twitter, Pinterest, LinkedIn, WhatsApp and other social media websites. Scripture Images (https://www.scripture-images.com) offers a large collection of UHD Christian wallpapers 3840x2160 and background images with Scripture quotes. 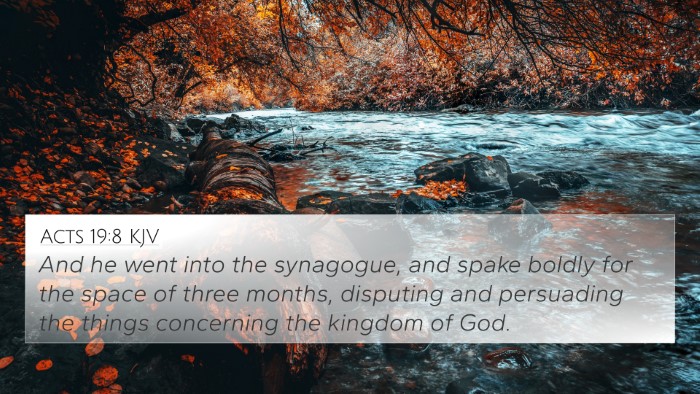 And he went into the synagogue, and spake boldly for the space of three months, disputing and persuading the things concerning the kingdom of God. 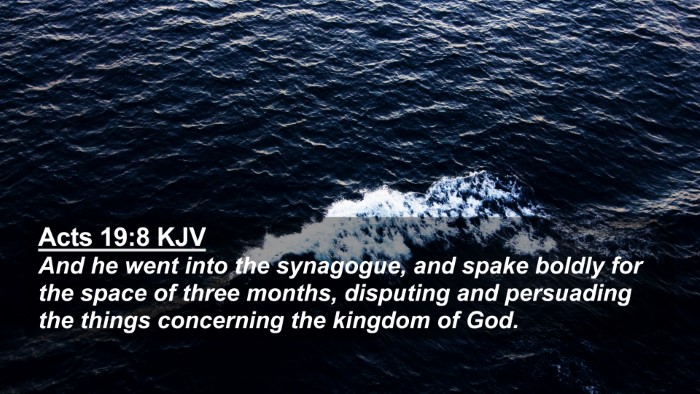 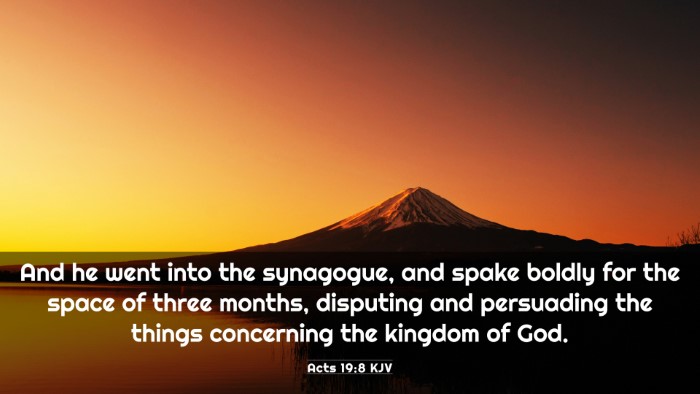 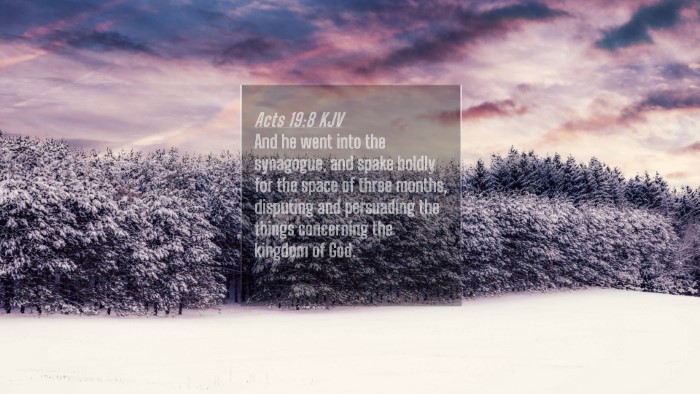 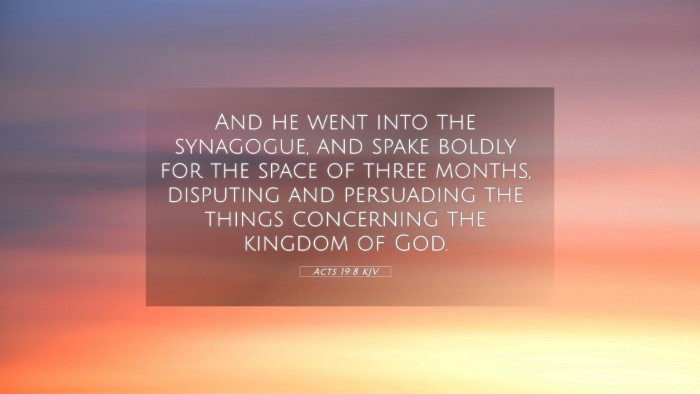 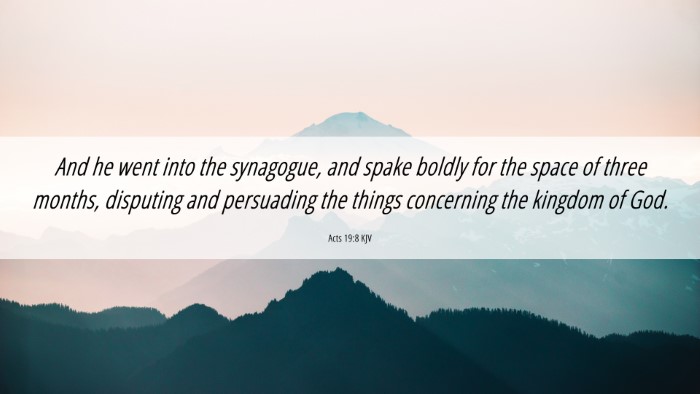 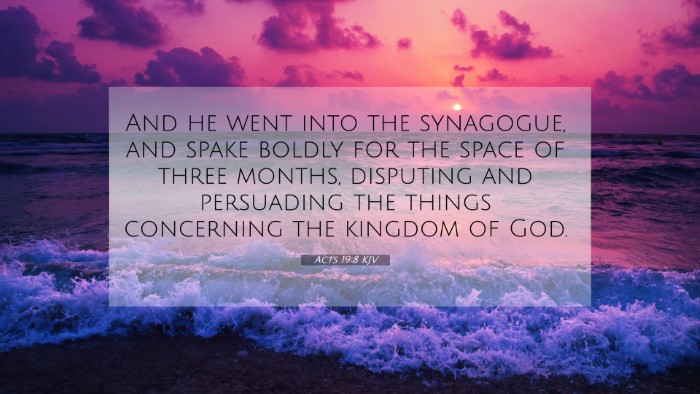 This cross-reference page section has been added with the hope of bringing in-depth meaning and understanding to the Scriptures. The cross references below can help identify similarities between Bible passages. The verses below have been identified in our system as verses related to Acts 19:8 KJV. Please click on any image below to navigate to that specific Bible verse page. 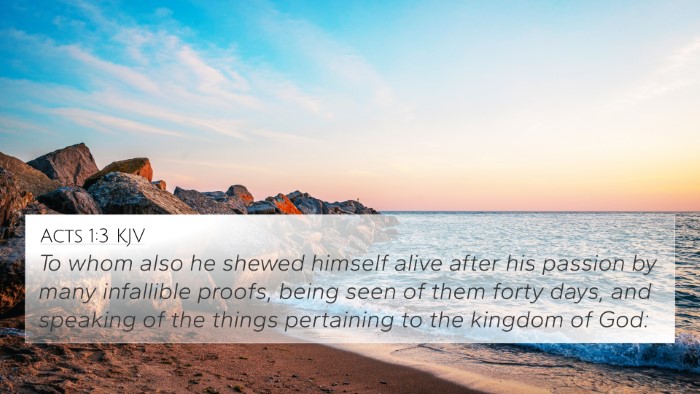 Acts 1:3 (KJV) »
To whom also he shewed himself alive after his passion by many infallible proofs, being seen of them forty days, and speaking of the things pertaining to the kingdom of God: 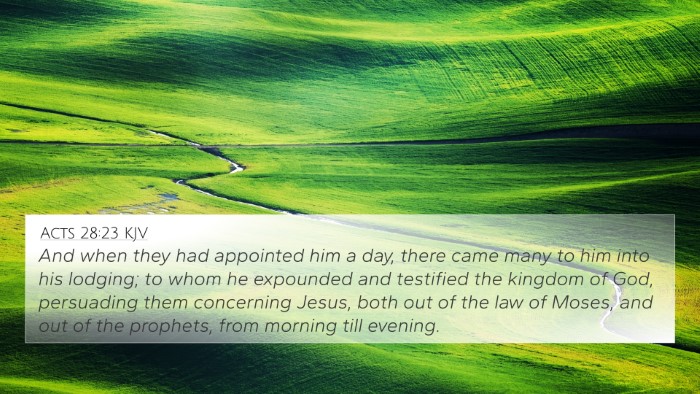 Acts 28:23 (KJV) »
And when they had appointed him a day, there came many to him into his lodging; to whom he expounded and testified the kingdom of God, persuading them concerning Jesus, both out of the law of Moses, and out of the prophets, from morning till evening. 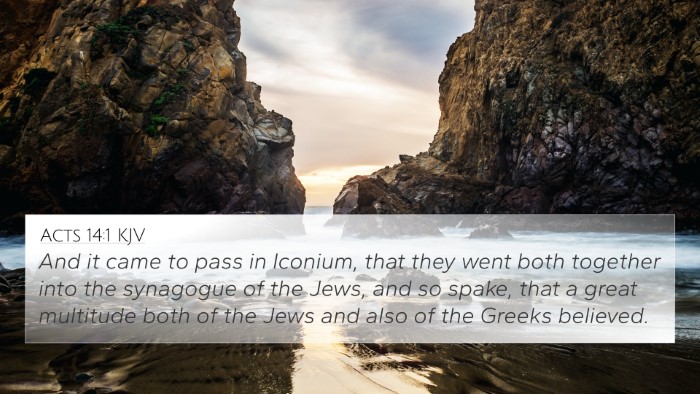 Acts 14:1 (KJV) »
And it came to pass in Iconium, that they went both together into the synagogue of the Jews, and so spake, that a great multitude both of the Jews and also of the Greeks believed. 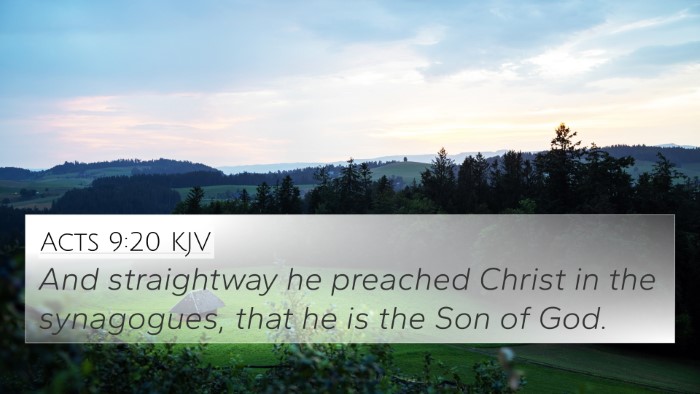 Acts 9:20 (KJV) »
And straightway he preached Christ in the synagogues, that he is the Son of God. 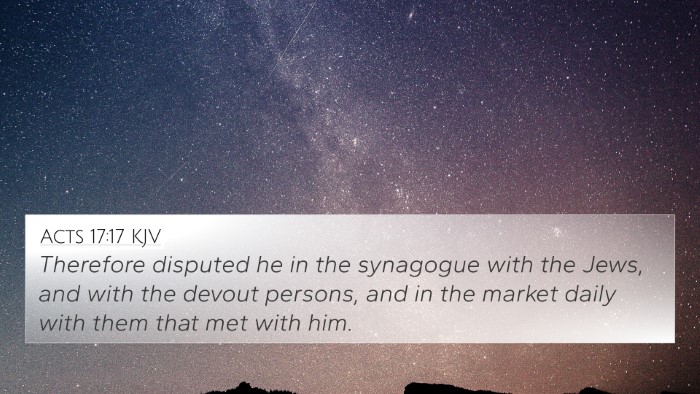 Acts 17:17 (KJV) »
Therefore disputed he in the synagogue with the Jews, and with the devout persons, and in the market daily with them that met with him. 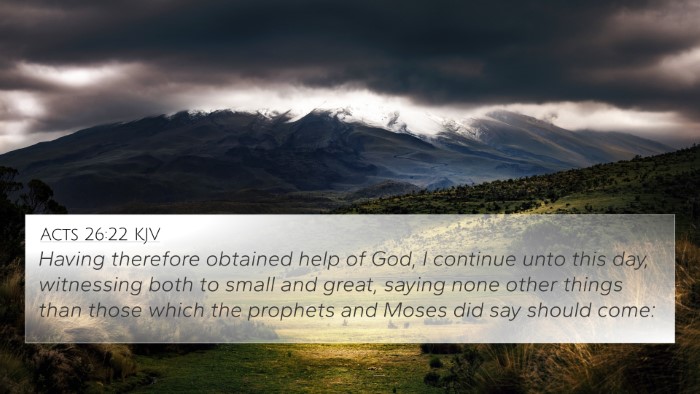 Acts 26:22 (KJV) »
Having therefore obtained help of God, I continue unto this day, witnessing both to small and great, saying none other things than those which the prophets and Moses did say should come: 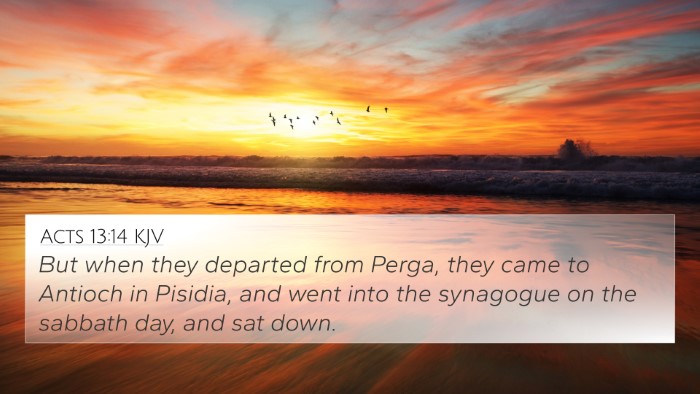 Acts 13:14 (KJV) »
But when they departed from Perga, they came to Antioch in Pisidia, and went into the synagogue on the sabbath day, and sat down. 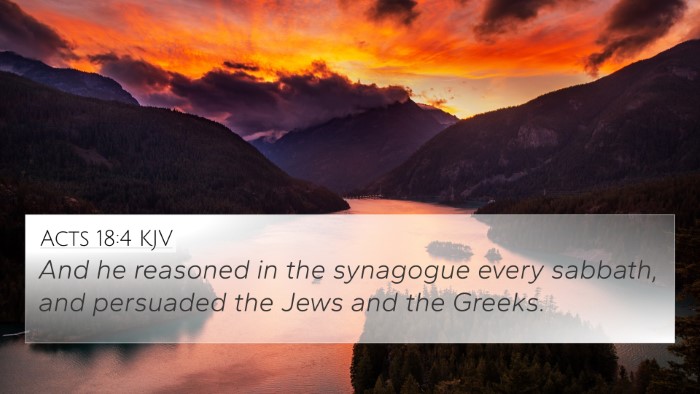 Acts 18:4 (KJV) »
And he reasoned in the synagogue every sabbath, and persuaded the Jews and the Greeks. 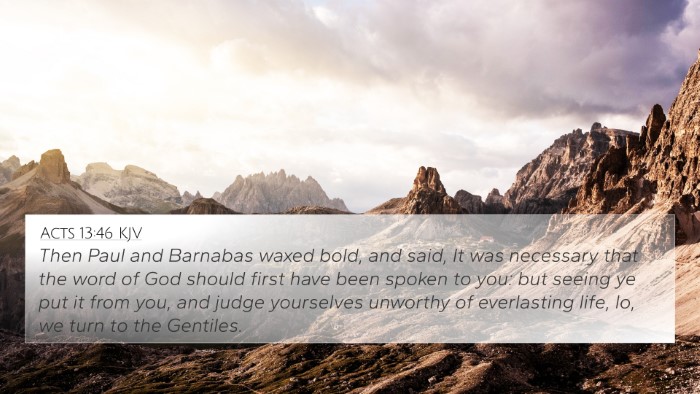 Acts 13:46 (KJV) »
Then Paul and Barnabas waxed bold, and said, It was necessary that the word of God should first have been spoken to you: but seeing ye put it from you, and judge yourselves unworthy of everlasting life, lo, we turn to the Gentiles. 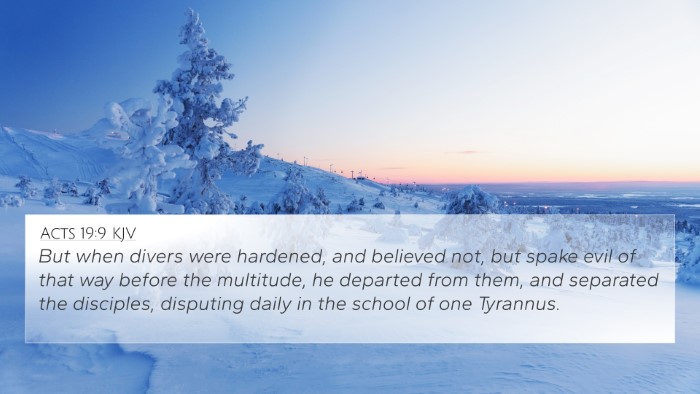 Acts 19:9 (KJV) »
But when divers were hardened, and believed not, but spake evil of that way before the multitude, he departed from them, and separated the disciples, disputing daily in the school of one Tyrannus. 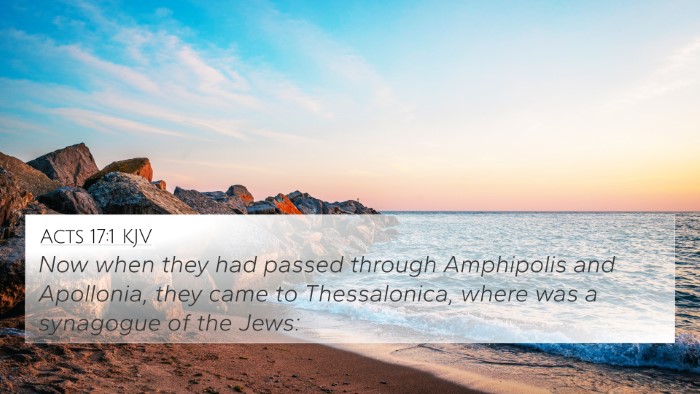 Acts 17:1 (KJV) »
Now when they had passed through Amphipolis and Apollonia, they came to Thessalonica, where was a synagogue of the Jews: 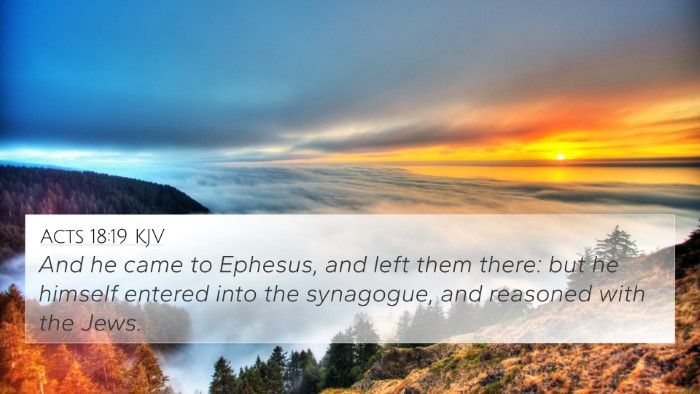 Acts 18:19 (KJV) »
And he came to Ephesus, and left them there: but he himself entered into the synagogue, and reasoned with the Jews.