Christian 4K Wallpapers with inspirational Bible verse quotes on beautiful images and backgrounds. Download Acts 20:3 KJV ultra hd wallpapers with Bible verses and share with your friends and family on Instagram or any social media platform. You can also use the links below to click and share the Acts 20:3 KJV 4k backgrounds on Facebook, Twitter, Pinterest, LinkedIn, WhatsApp and other social media websites. Scripture Images (https://www.scripture-images.com) offers a large collection of UHD Christian wallpapers 3840x2160 and background images with Scripture quotes. 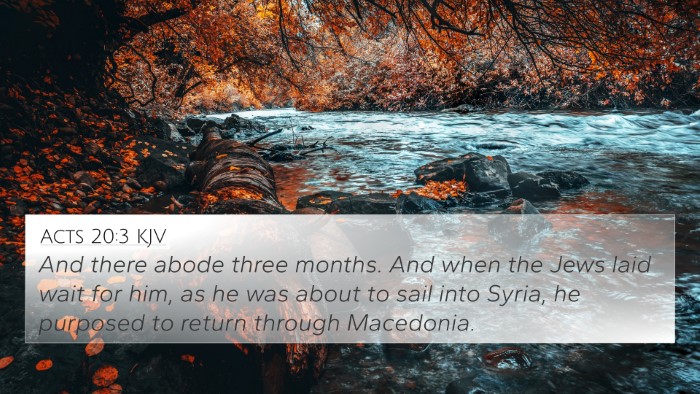 And there abode three months. And when the Jews laid wait for him, as he was about to sail into Syria, he purposed to return through Macedonia. 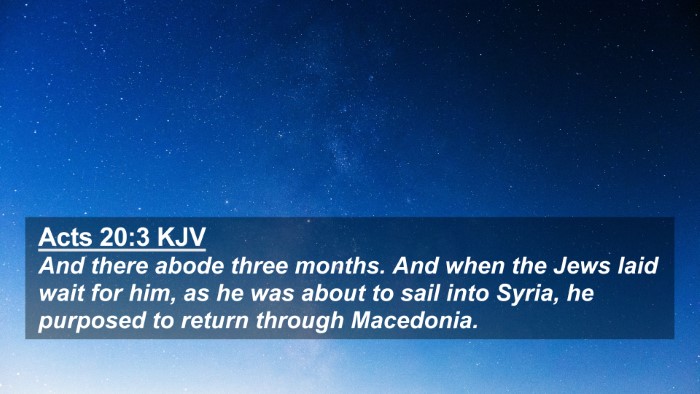 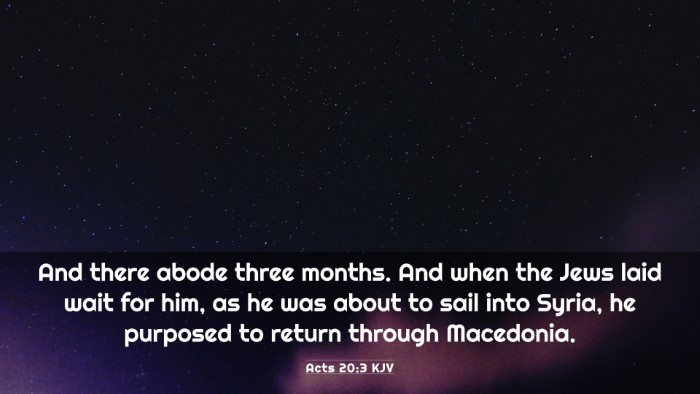 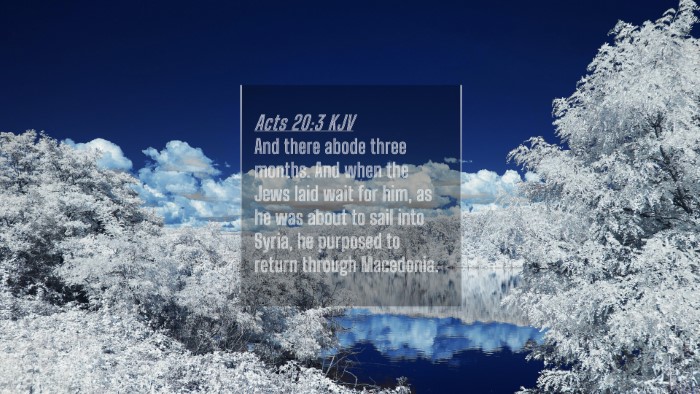 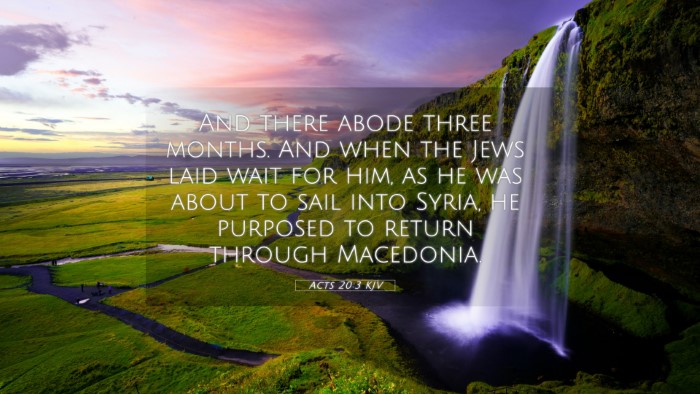 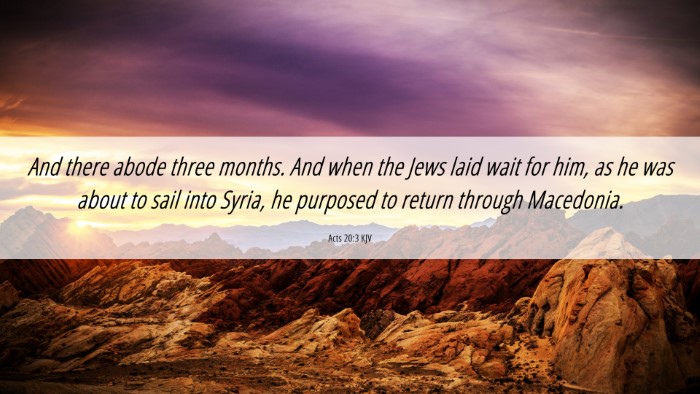 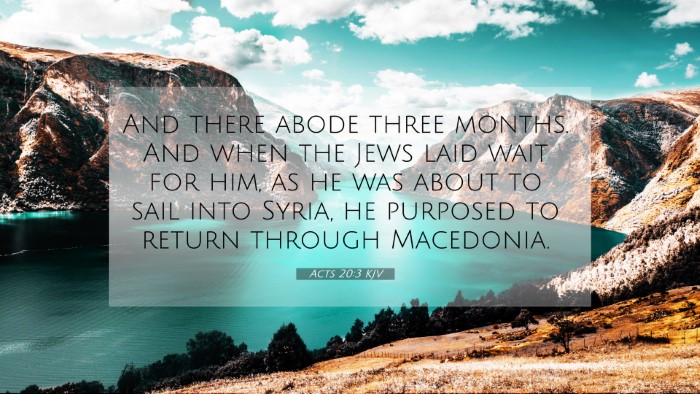 This cross-reference page section has been added with the hope of bringing in-depth meaning and understanding to the Scriptures. The cross references below can help identify similarities between Bible passages. The verses below have been identified in our system as verses related to Acts 20:3 KJV. Please click on any image below to navigate to that specific Bible verse page. 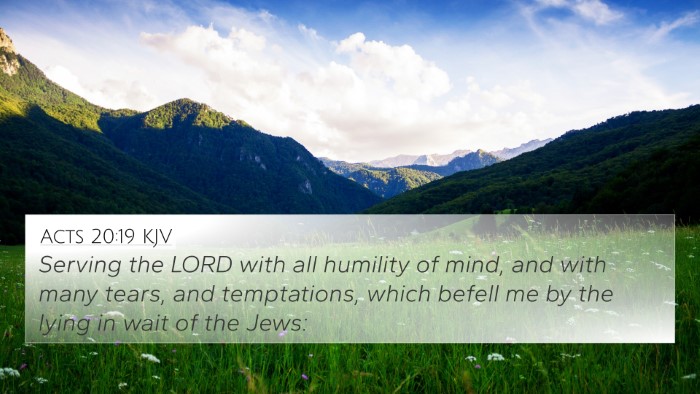 Acts 20:19 (KJV) »
Serving the LORD with all humility of mind, and with many tears, and temptations, which befell me by the lying in wait of the Jews: 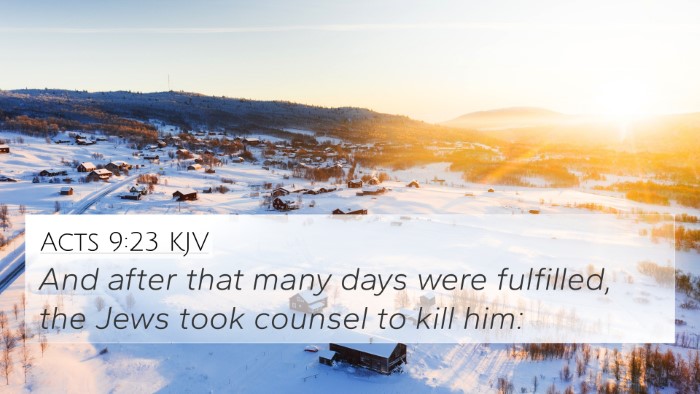 Acts 9:23 (KJV) »
And after that many days were fulfilled, the Jews took counsel to kill him: 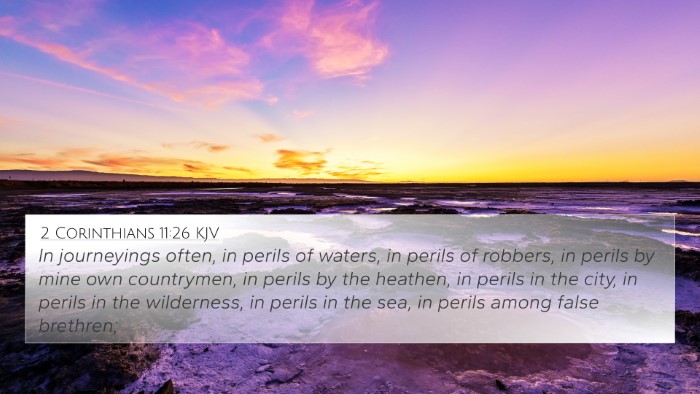 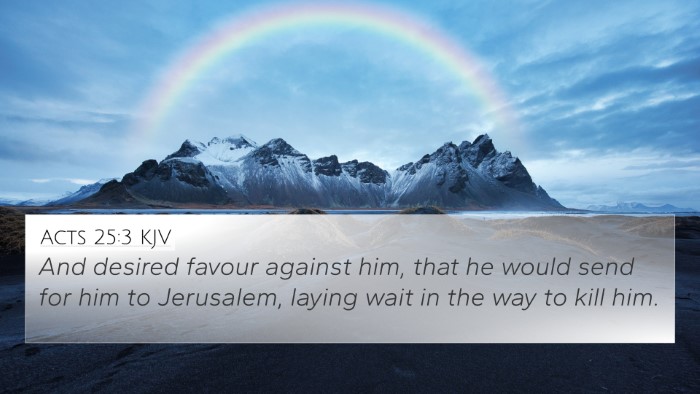 Acts 25:3 (KJV) »
And desired favour against him, that he would send for him to Jerusalem, laying wait in the way to kill him. 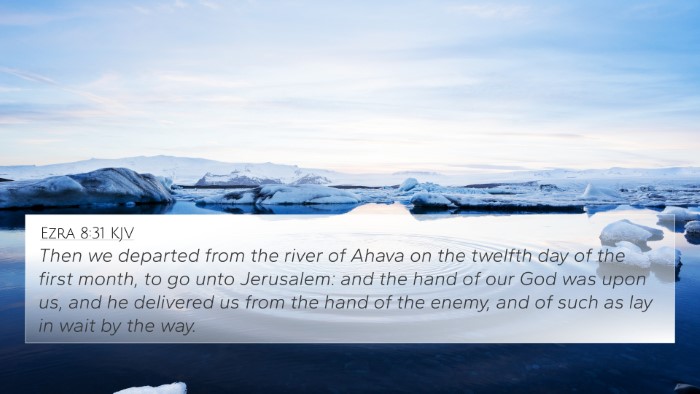 Ezra 8:31 (KJV) »
Then we departed from the river of Ahava on the twelfth day of the first month, to go unto Jerusalem: and the hand of our God was upon us, and he delivered us from the hand of the enemy, and of such as lay in wait by the way. 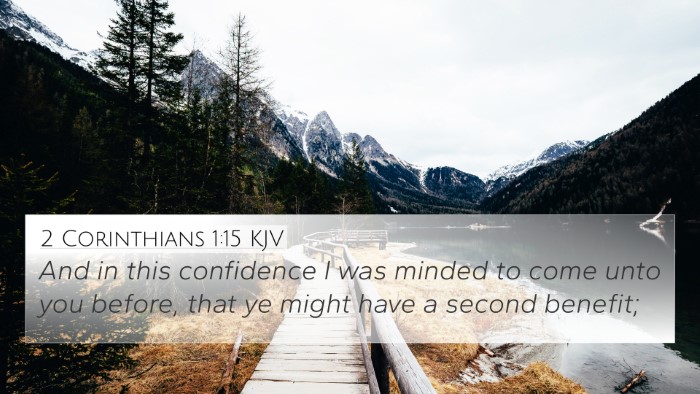 2 Corinthians 1:15 (KJV) »
And in this confidence I was minded to come unto you before, that ye might have a second benefit; 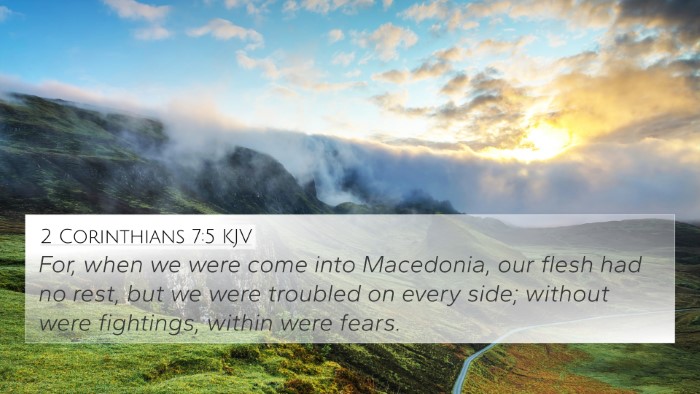 2 Corinthians 7:5 (KJV) »
For, when we were come into Macedonia, our flesh had no rest, but we were troubled on every side; without were fightings, within were fears. 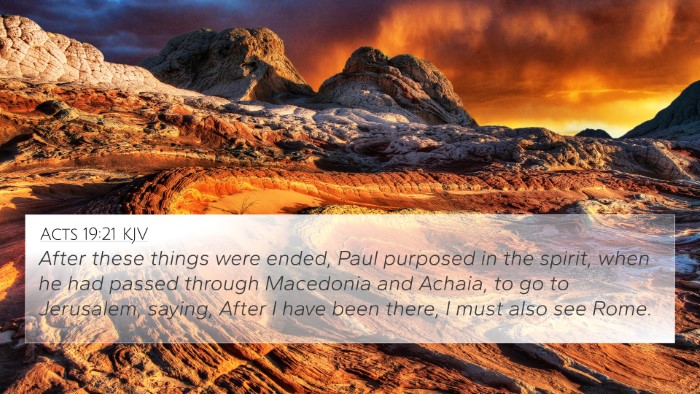 Acts 19:21 (KJV) »
After these things were ended, Paul purposed in the spirit, when he had passed through Macedonia and Achaia, to go to Jerusalem, saying, After I have been there, I must also see Rome. 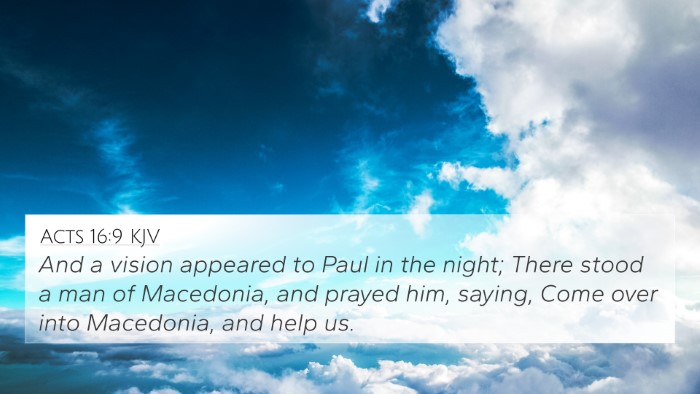 Acts 16:9 (KJV) »
And a vision appeared to Paul in the night; There stood a man of Macedonia, and prayed him, saying, Come over into Macedonia, and help us. 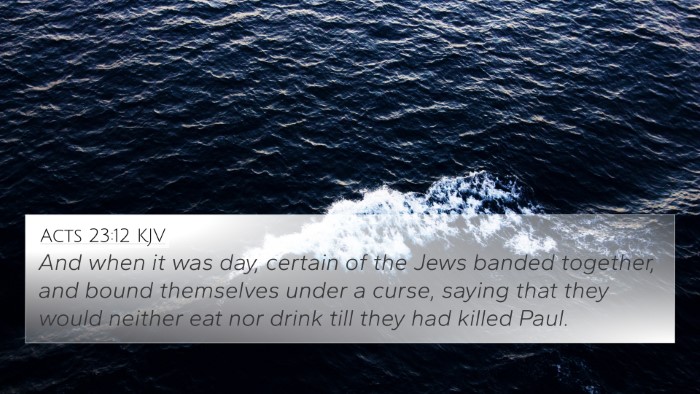 Acts 23:12 (KJV) »
And when it was day, certain of the Jews banded together, and bound themselves under a curse, saying that they would neither eat nor drink till they had killed Paul. 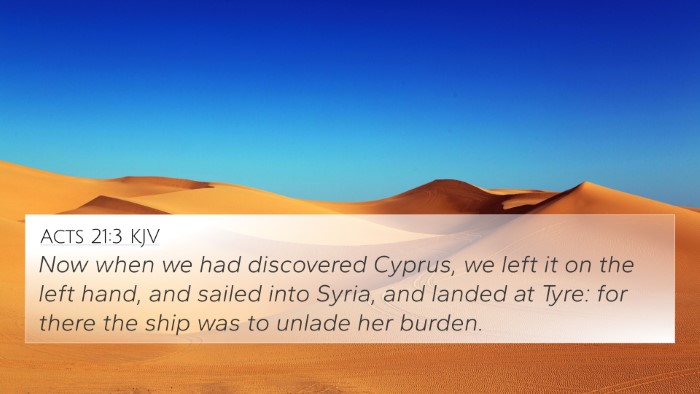 Acts 21:3 (KJV) »
Now when we had discovered Cyprus, we left it on the left hand, and sailed into Syria, and landed at Tyre: for there the ship was to unlade her burden. 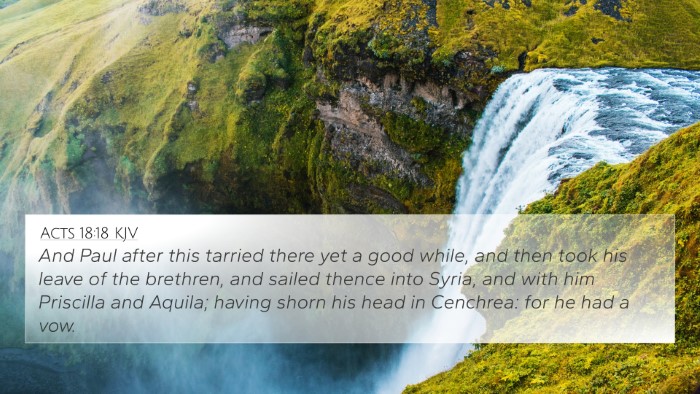 Acts 18:18 (KJV) »
And Paul after this tarried there yet a good while, and then took his leave of the brethren, and sailed thence into Syria, and with him Priscilla and Aquila; having shorn his head in Cenchrea: for he had a vow.