Christian 4K Wallpapers with inspirational Bible verse quotes on beautiful images and backgrounds. Download John 20:1 KJV ultra hd wallpapers with Bible verses and share with your friends and family on Instagram or any social media platform. You can also use the links below to click and share the John 20:1 KJV 4k backgrounds on Facebook, Twitter, Pinterest, LinkedIn, WhatsApp and other social media websites. Scripture Images (https://www.scripture-images.com) offers a large collection of UHD Christian wallpapers 3840x2160 and background images with Scripture quotes. 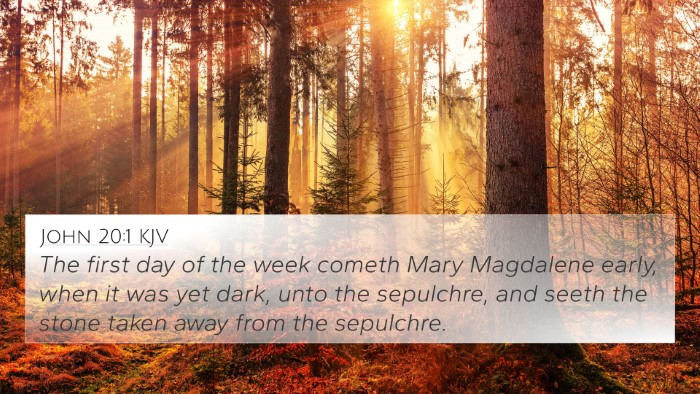 The first day of the week cometh Mary Magdalene early, when it was yet dark, unto the sepulchre, and seeth the stone taken away from the sepulchre. 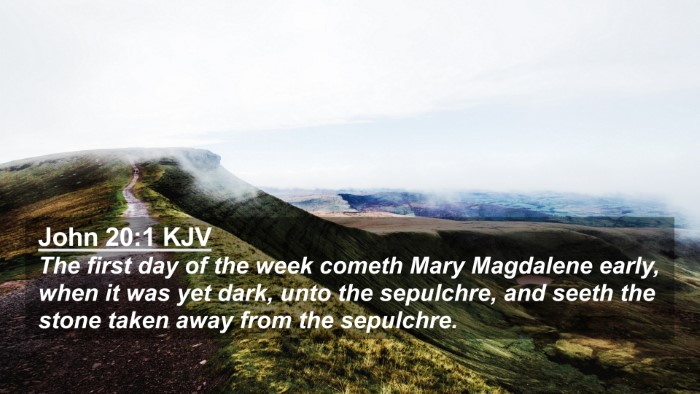 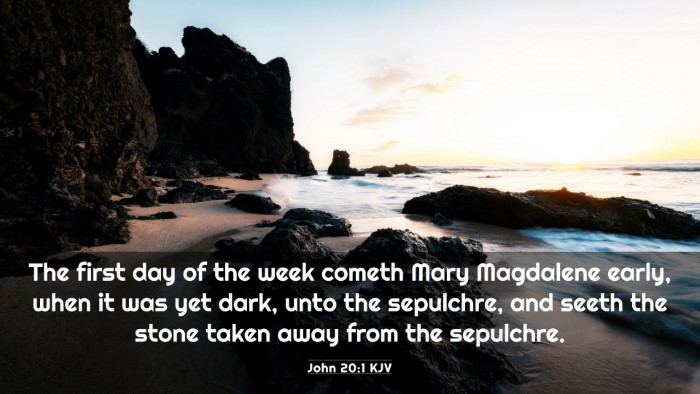 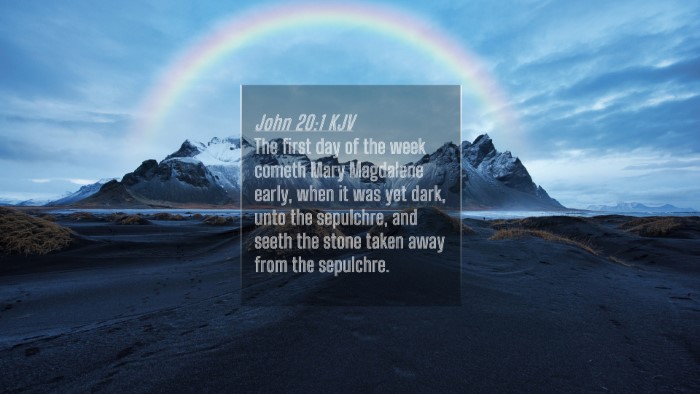 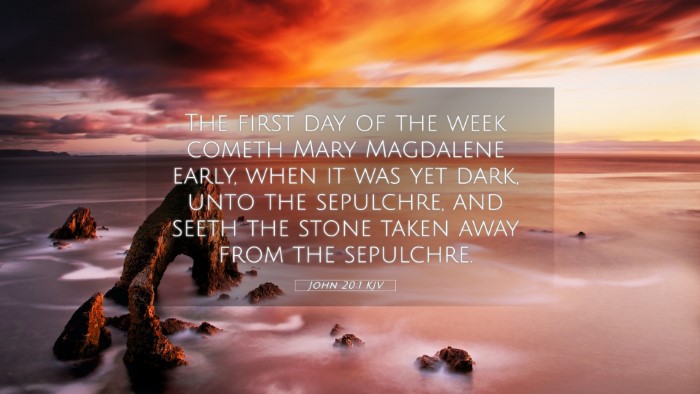 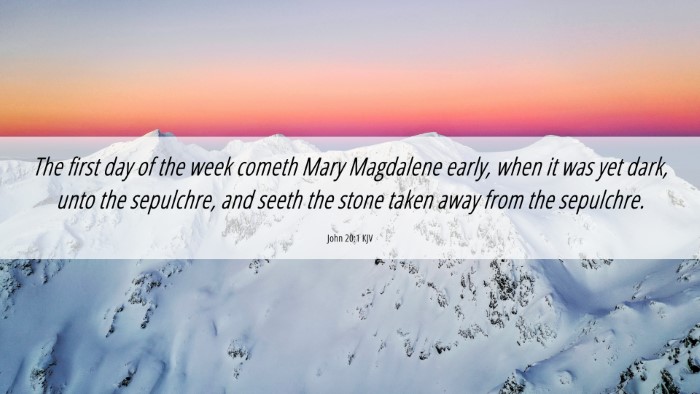 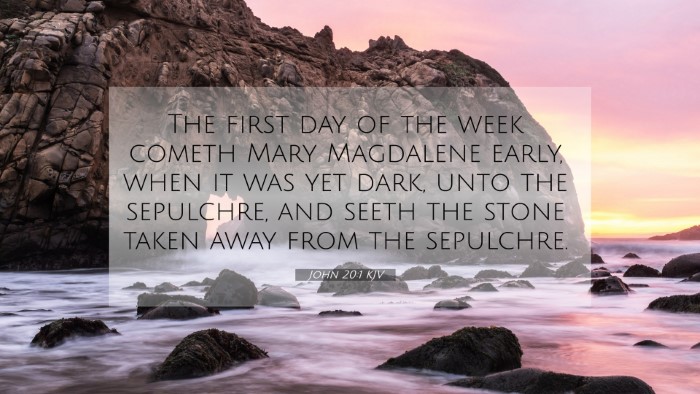 This cross-reference page section has been added with the hope of bringing in-depth meaning and understanding to the Scriptures. The cross references below can help identify similarities between Bible passages. The verses below have been identified in our system as verses related to John 20:1 KJV. Please click on any image below to navigate to that specific Bible verse page. 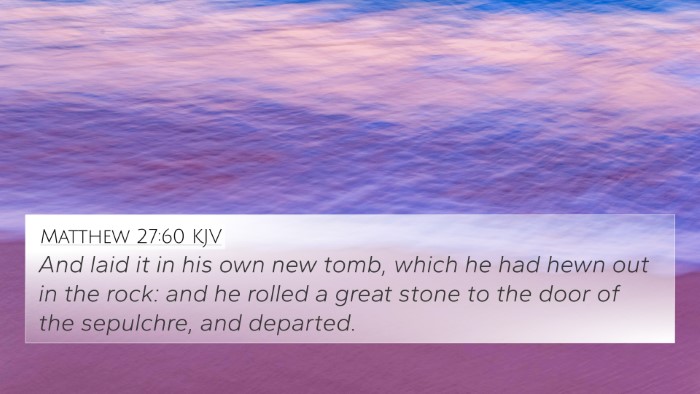 Matthew 27:60 (KJV) »
And laid it in his own new tomb, which he had hewn out in the rock: and he rolled a great stone to the door of the sepulchre, and departed. 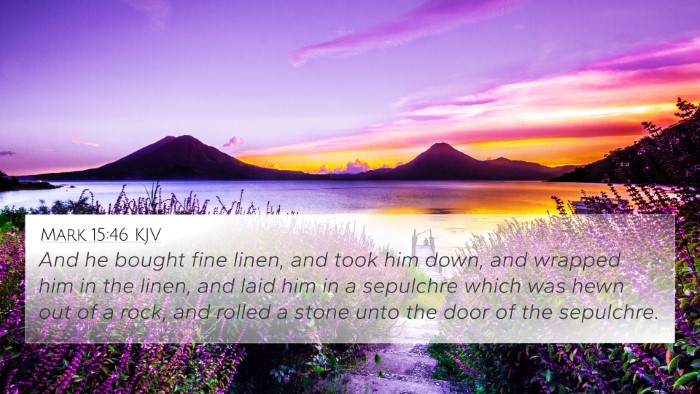 Mark 15:46 (KJV) »
And he bought fine linen, and took him down, and wrapped him in the linen, and laid him in a sepulchre which was hewn out of a rock, and rolled a stone unto the door of the sepulchre. 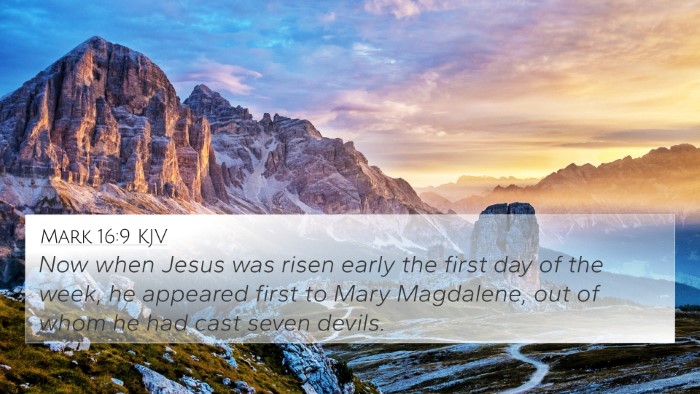 Mark 16:9 (KJV) »
Now when Jesus was risen early the first day of the week, he appeared first to Mary Magdalene, out of whom he had cast seven devils. 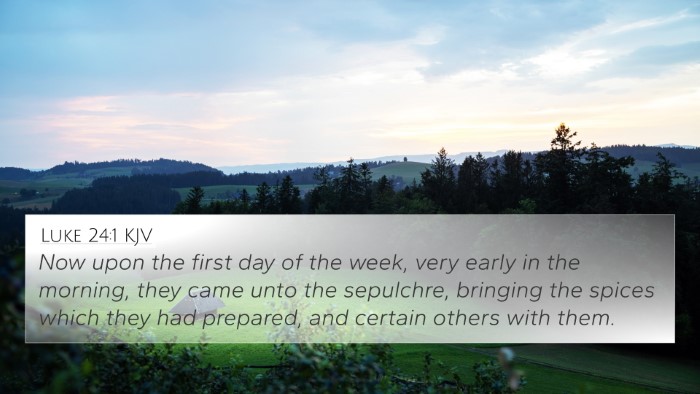 Luke 24:1 (KJV) »
Now upon the first day of the week, very early in the morning, they came unto the sepulchre, bringing the spices which they had prepared, and certain others with them. 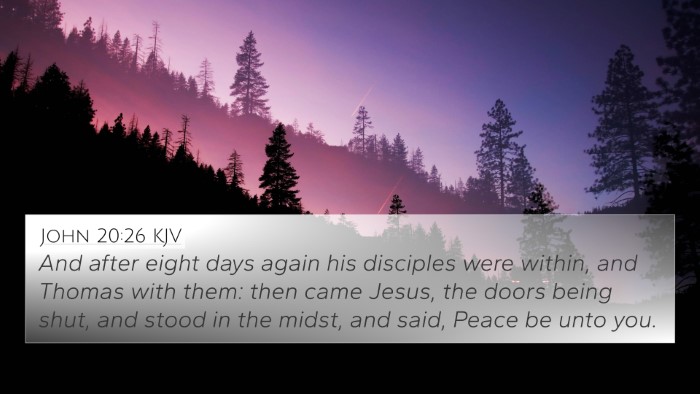 John 20:26 (KJV) »
And after eight days again his disciples were within, and Thomas with them: then came Jesus, the doors being shut, and stood in the midst, and said, Peace be unto you. 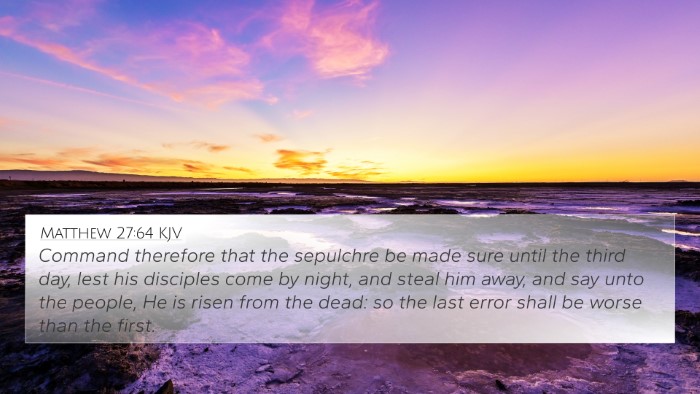 Matthew 27:64 (KJV) »
Command therefore that the sepulchre be made sure until the third day, lest his disciples come by night, and steal him away, and say unto the people, He is risen from the dead: so the last error shall be worse than the first. 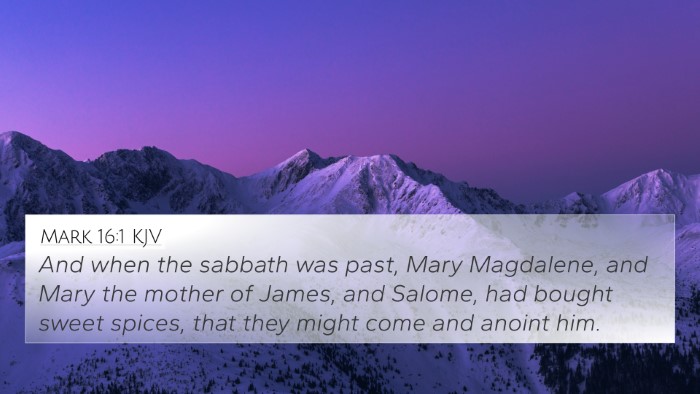 Mark 16:1 (KJV) »
And when the sabbath was past, Mary Magdalene, and Mary the mother of James, and Salome, had bought sweet spices, that they might come and anoint him. 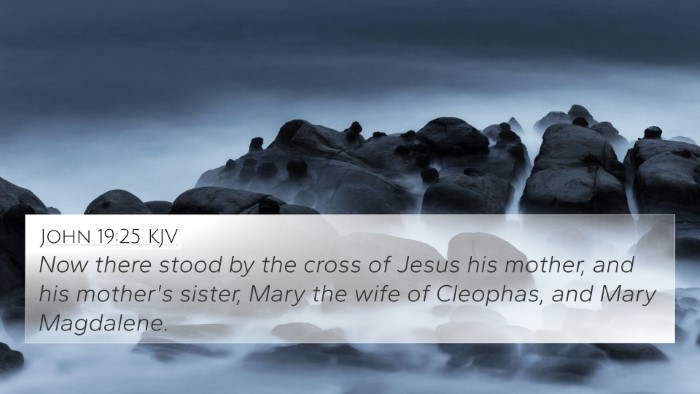 John 19:25 (KJV) »
Now there stood by the cross of Jesus his mother, and his mother's sister, Mary the wife of Cleophas, and Mary Magdalene. 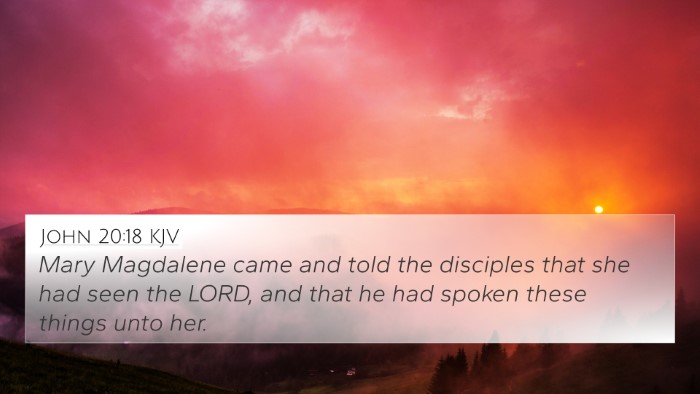 John 20:18 (KJV) »
Mary Magdalene came and told the disciples that she had seen the LORD, and that he had spoken these things unto her. 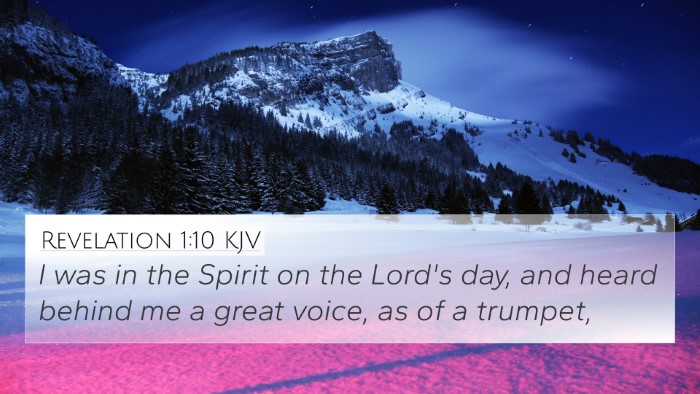 Revelation 1:10 (KJV) »
I was in the Spirit on the Lord's day, and heard behind me a great voice, as of a trumpet, 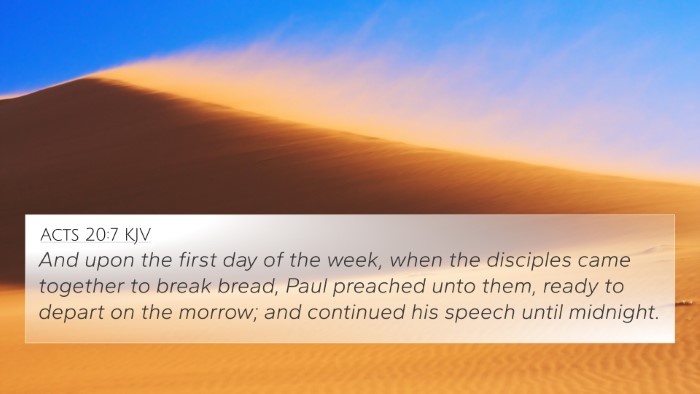 Acts 20:7 (KJV) »
And upon the first day of the week, when the disciples came together to break bread, Paul preached unto them, ready to depart on the morrow; and continued his speech until midnight. 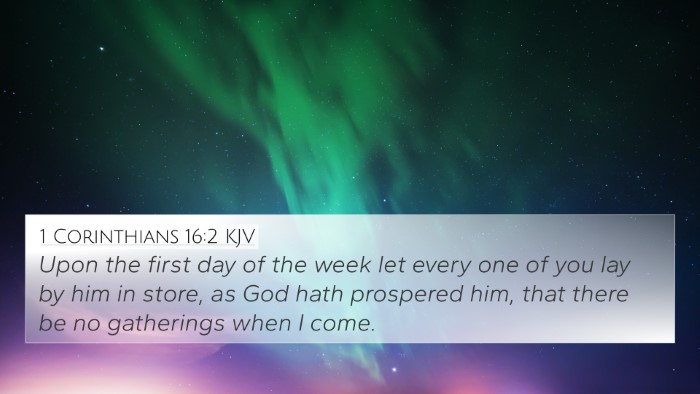 1 Corinthians 16:2 (KJV) »
Upon the first day of the week let every one of you lay by him in store, as God hath prospered him, that there be no gatherings when I come.