Christian 4K Wallpapers with inspirational Bible verse quotes on beautiful images and backgrounds. Download Micah 1:1 WEB ultra hd wallpapers with Bible verses and share with your friends and family on Instagram or any social media platform. You can also use the links below to click and share the Micah 1:1 WEB 4k backgrounds on Facebook, Twitter, Pinterest, LinkedIn, WhatsApp and other social media websites. Scripture Images (https://www.scripture-images.com) offers a large collection of UHD Christian wallpapers 3840x2160 and background images with Scripture quotes. 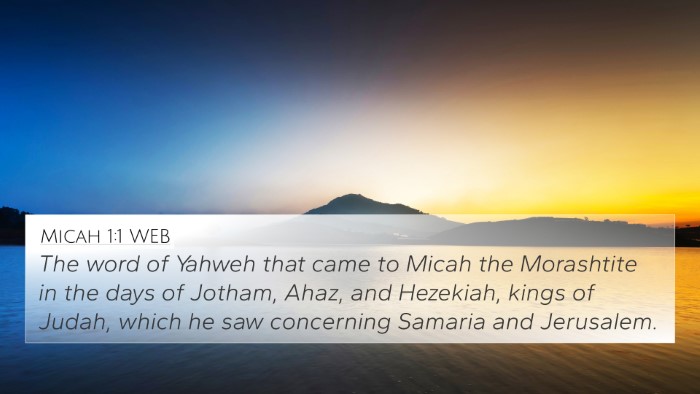 The word of Yahweh that came to Micah the Morashtite in the days of Jotham, Ahaz, and Hezekiah, kings of Judah, which he saw concerning Samaria and Jerusalem. 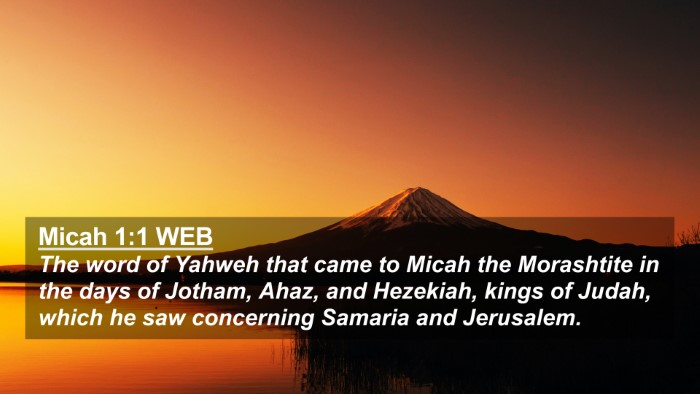 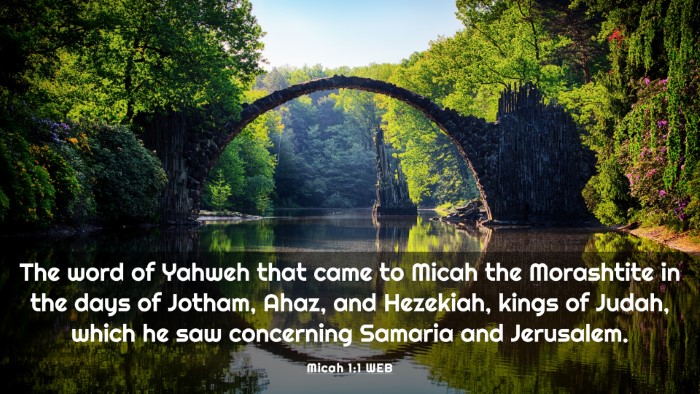 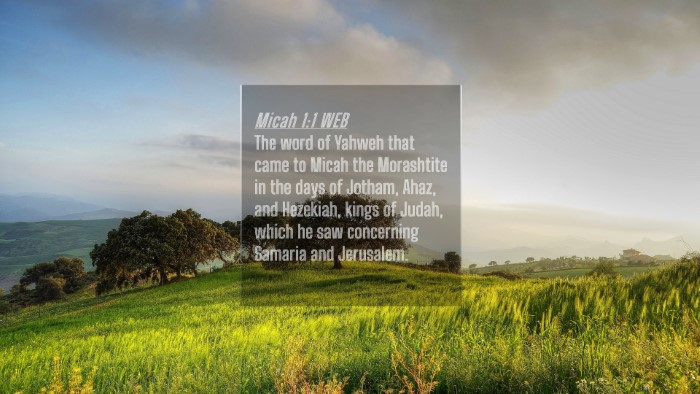 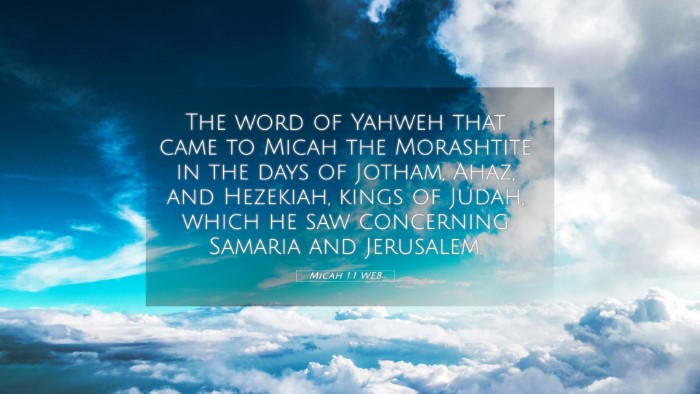 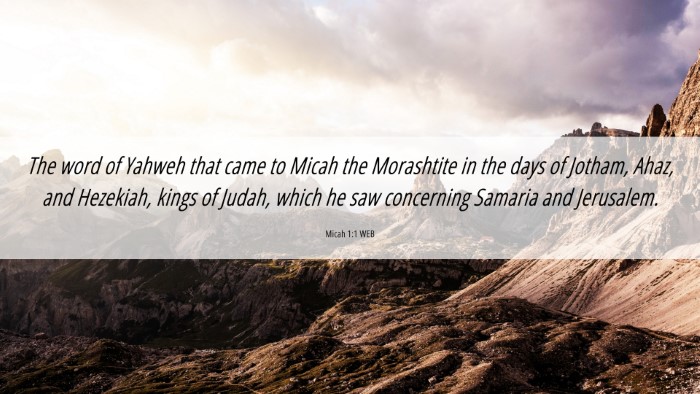 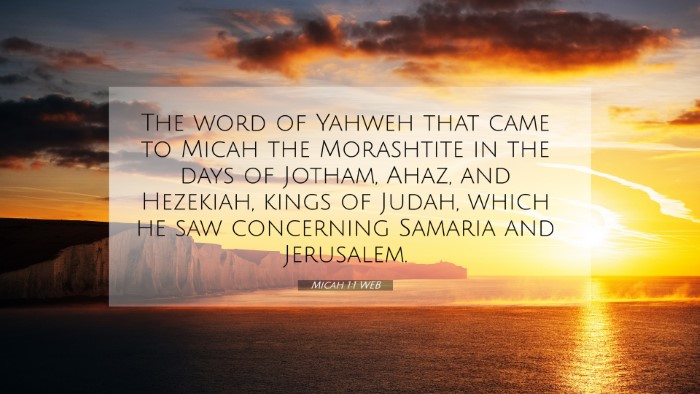 This cross-reference page section has been added with the hope of bringing in-depth meaning and understanding to the Scriptures. The cross references below can help identify similarities between Bible passages. The verses below have been identified in our system as verses related to Micah 1:1 WEB. Please click on any image below to navigate to that specific Bible verse page. 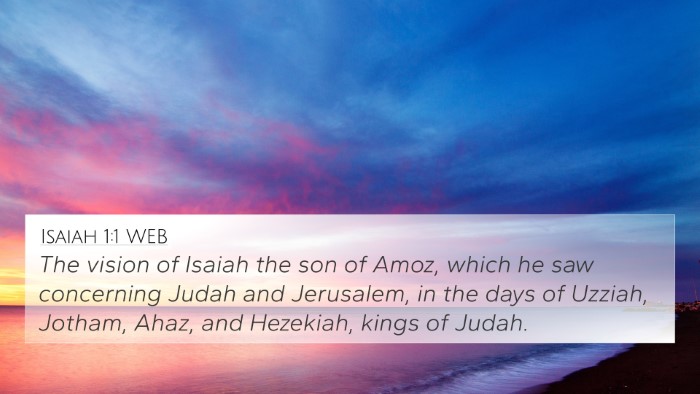 Isaiah 1:1 (WEB) »
The vision of Isaiah the son of Amoz, which he saw concerning Judah and Jerusalem, in the days of Uzziah, Jotham, Ahaz, and Hezekiah, kings of Judah. 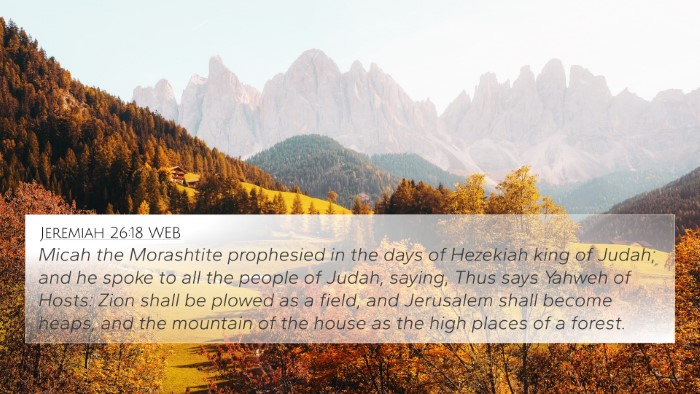 Jeremiah 26:18 (WEB) »
Micah the Morashtite prophesied in the days of Hezekiah king of Judah; and he spoke to all the people of Judah, saying, Thus says Yahweh of Hosts: Zion shall be plowed as a field, and Jerusalem shall become heaps, and the mountain of the house as the high places of a forest. 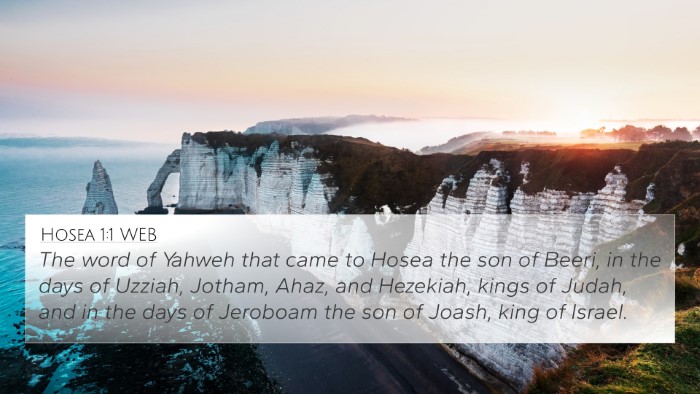 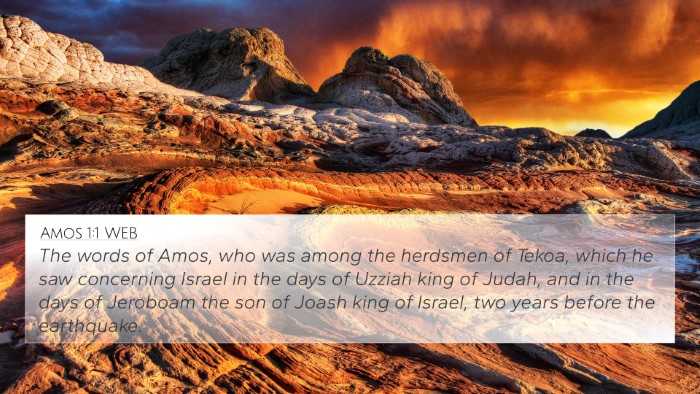 Amos 1:1 (WEB) »
The words of Amos, who was among the herdsmen of Tekoa, which he saw concerning Israel in the days of Uzziah king of Judah, and in the days of Jeroboam the son of Joash king of Israel, two years before the earthquake. 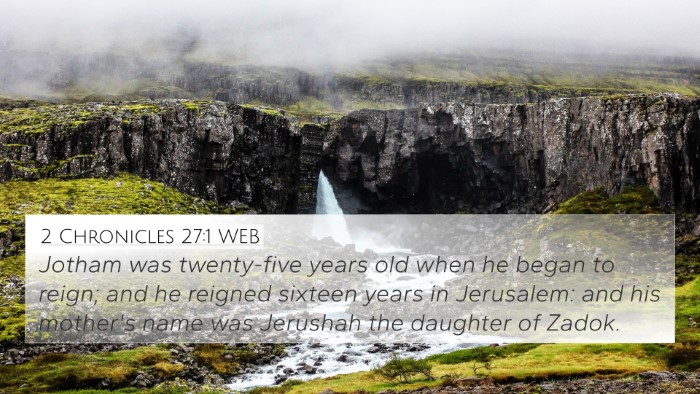 2 Chronicles 27:1 (WEB) »
Jotham was twenty-five years old when he began to reign; and he reigned sixteen years in Jerusalem: and his mother's name was Jerushah the daughter of Zadok. 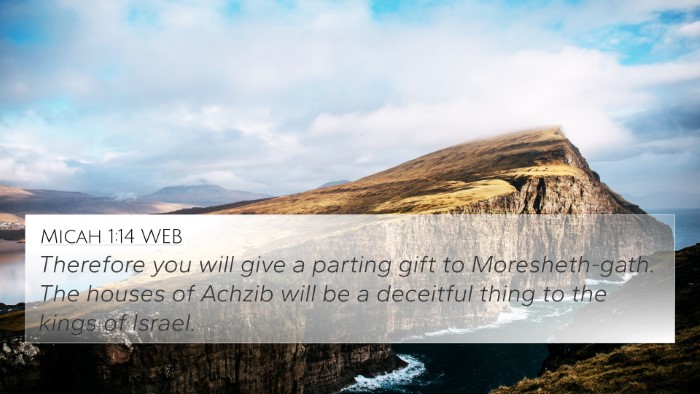 Micah 1:14 (WEB) »
Therefore you will give a parting gift to Moresheth-gath. The houses of Achzib will be a deceitful thing to the kings of Israel. 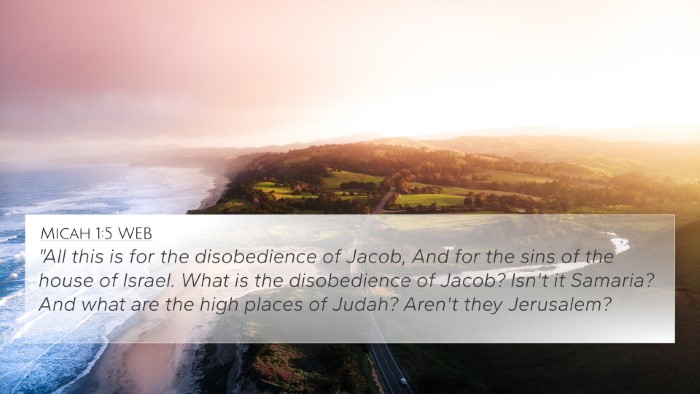 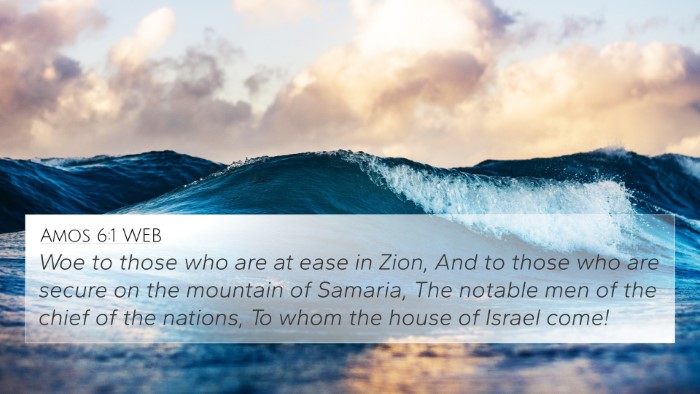 Amos 6:1 (WEB) »
Woe to those who are at ease in Zion, And to those who are secure on the mountain of Samaria, The notable men of the chief of the nations, To whom the house of Israel come! 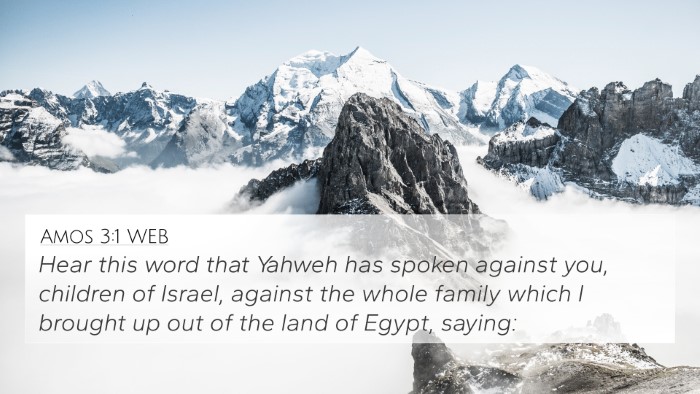 Amos 3:1 (WEB) »
Hear this word that Yahweh has spoken against you, children of Israel, against the whole family which I brought up out of the land of Egypt, saying: 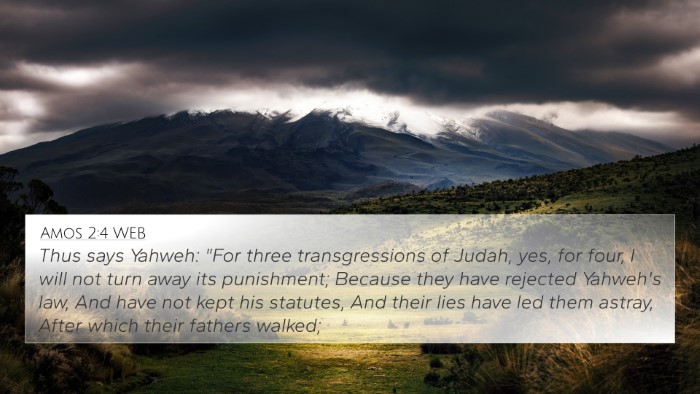 Amos 2:4 (WEB) »
Thus says Yahweh: "For three transgressions of Judah, yes, for four, I will not turn away its punishment; Because they have rejected Yahweh's law, And have not kept his statutes, And their lies have led them astray, After which their fathers walked; 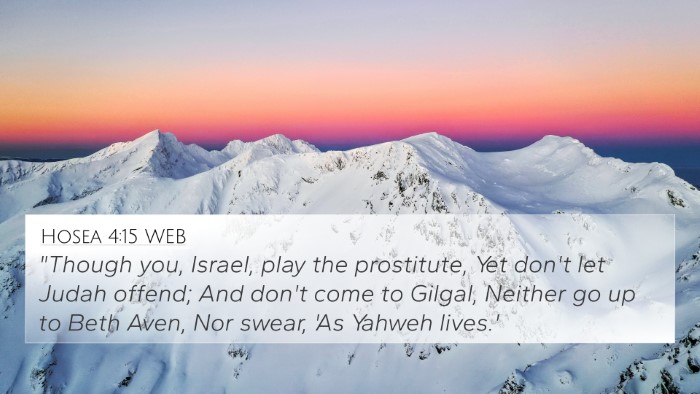 Hosea 4:15 (WEB) »
"Though you, Israel, play the prostitute, Yet don't let Judah offend; And don't come to Gilgal, Neither go up to Beth Aven, Nor swear, 'As Yahweh lives.' 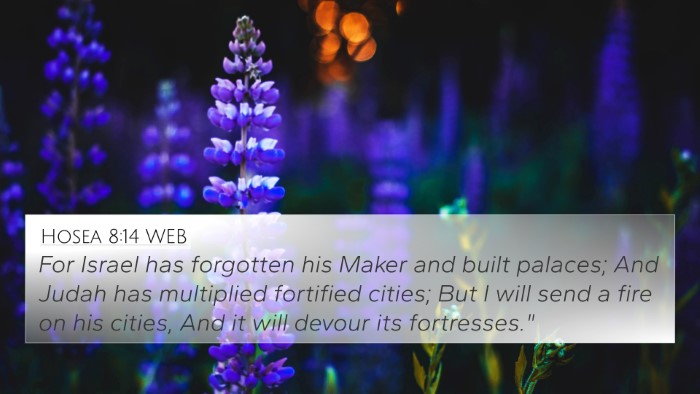 Hosea 8:14 (WEB) »
For Israel has forgotten his Maker and built palaces; And Judah has multiplied fortified cities; But I will send a fire on his cities, And it will devour its fortresses."