Christian 4K Wallpapers with inspirational Bible verse quotes on beautiful images and backgrounds. Download Jude 1:4 WEB ultra hd wallpapers with Bible verses and share with your friends and family on Instagram or any social media platform. You can also use the links below to click and share the Jude 1:4 WEB 4k backgrounds on Facebook, Twitter, Pinterest, LinkedIn, WhatsApp and other social media websites. Scripture Images (https://www.scripture-images.com) offers a large collection of UHD Christian wallpapers 3840x2160 and background images with Scripture quotes. 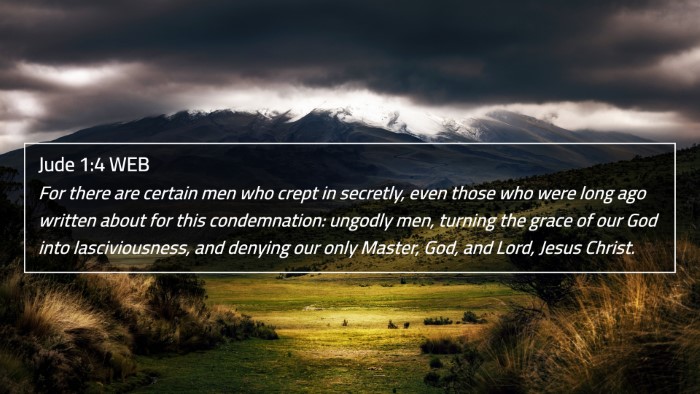 For there are certain men who crept in secretly, even those who were long ago written about for this condemnation: ungodly men, turning the grace of our God into lasciviousness, and denying our only Master, God, and Lord, Jesus Christ. 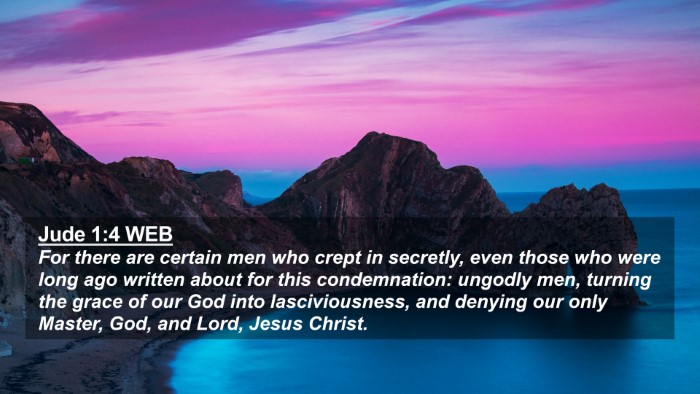 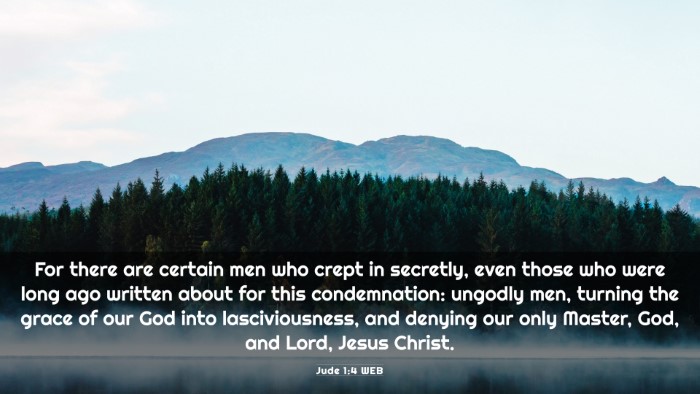 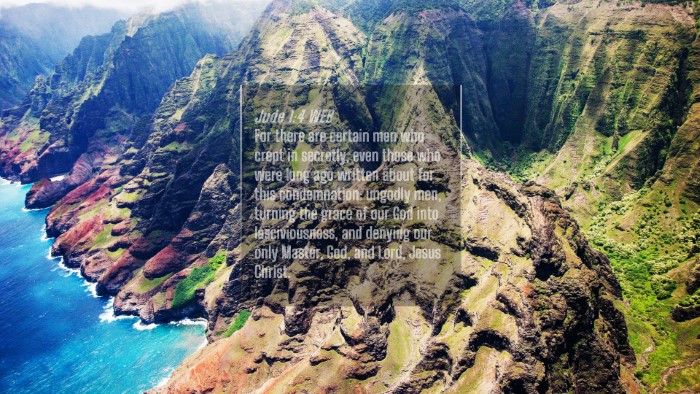 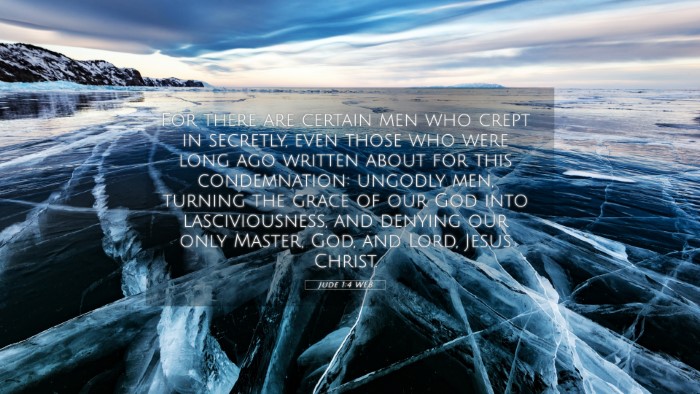 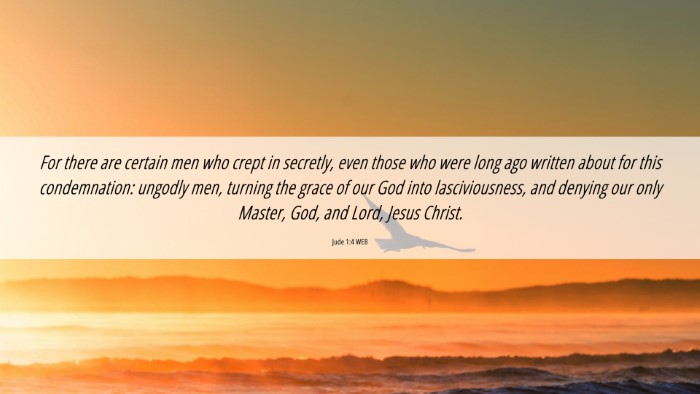 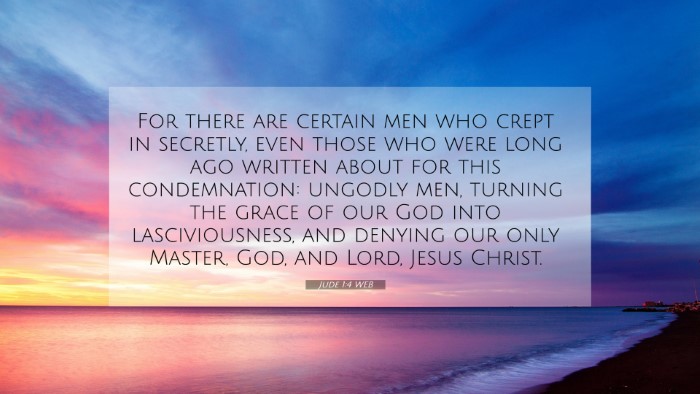 This cross-reference page section has been added with the hope of bringing in-depth meaning and understanding to the Scriptures. The cross references below can help identify similarities between Bible passages. The verses below have been identified in our system as verses related to Jude 1:4 WEB. Please click on any image below to navigate to that specific Bible verse page. 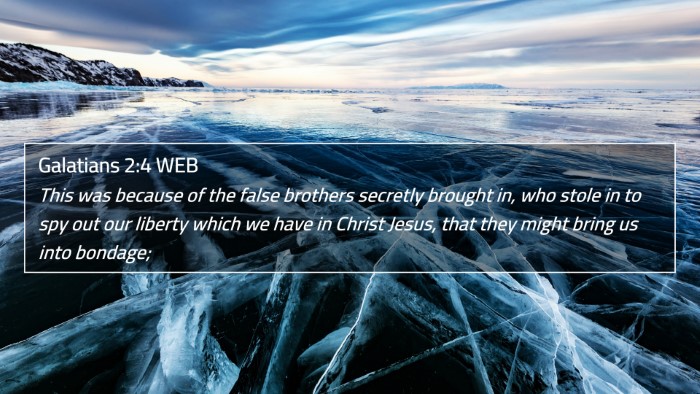 Galatians 2:4 (WEB) »
This was because of the false brothers secretly brought in, who stole in to spy out our liberty which we have in Christ Jesus, that they might bring us into bondage; 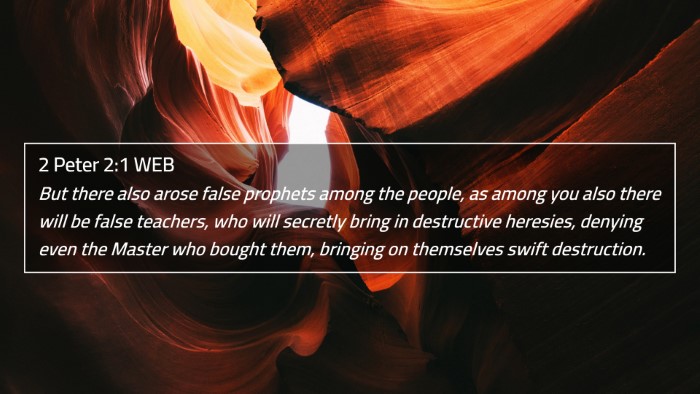 2 Peter 2:1 (WEB) »
But there also arose false prophets among the people, as among you also there will be false teachers, who will secretly bring in destructive heresies, denying even the Master who bought them, bringing on themselves swift destruction. 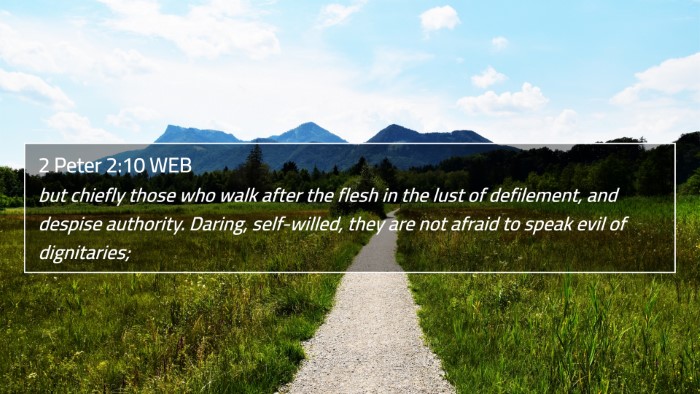 2 Peter 2:10 (WEB) »
but chiefly those who walk after the flesh in the lust of defilement, and despise authority. Daring, self-willed, they are not afraid to speak evil of dignitaries; 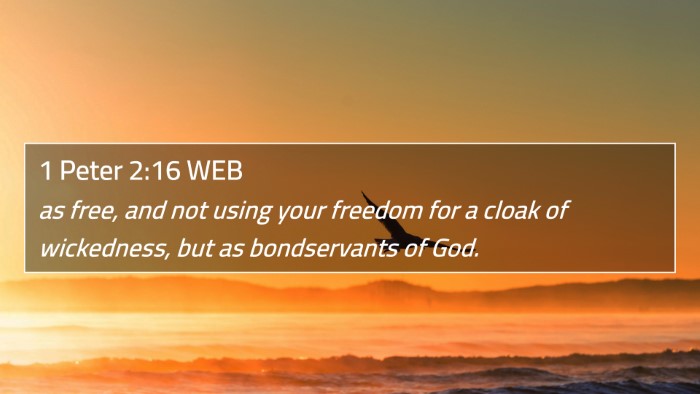 1 Peter 2:16 (WEB) »
as free, and not using your freedom for a cloak of wickedness, but as bondservants of God. 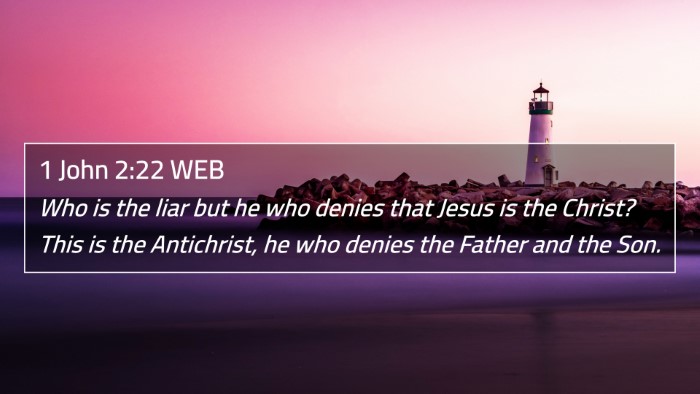 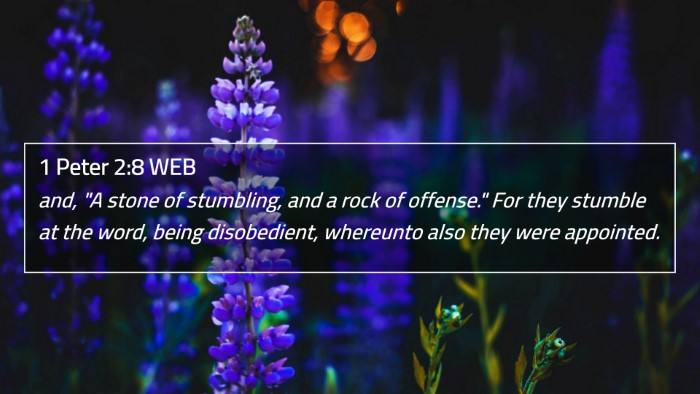 1 Peter 2:8 (WEB) »
and, "A stone of stumbling, and a rock of offense." For they stumble at the word, being disobedient, whereunto also they were appointed. 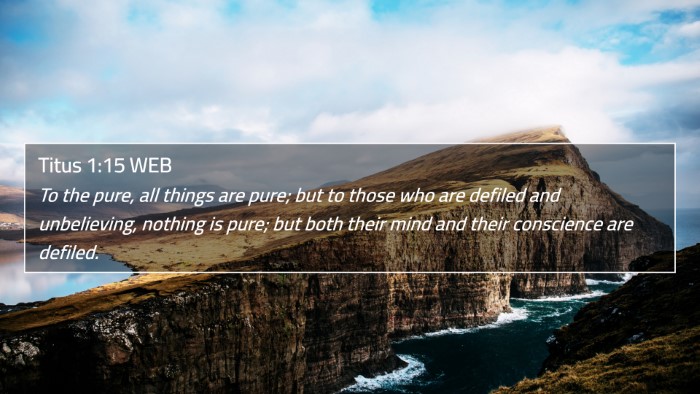 Titus 1:15 (WEB) »
To the pure, all things are pure; but to those who are defiled and unbelieving, nothing is pure; but both their mind and their conscience are defiled. 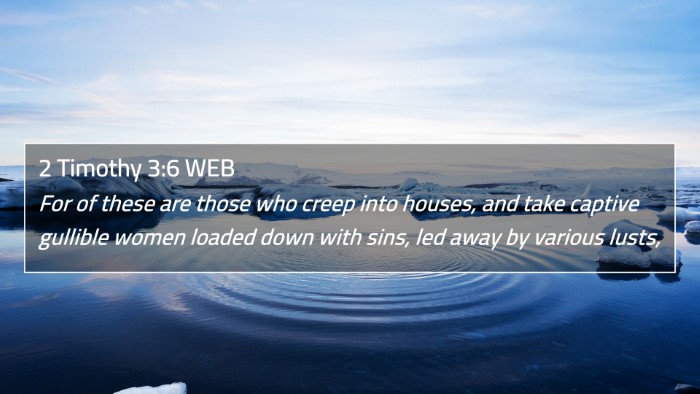 2 Timothy 3:6 (WEB) »
For of these are those who creep into houses, and take captive gullible women loaded down with sins, led away by various lusts, 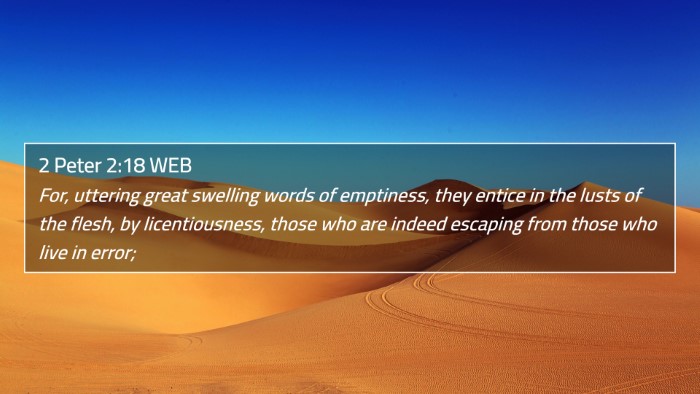 2 Peter 2:18 (WEB) »
For, uttering great swelling words of emptiness, they entice in the lusts of the flesh, by licentiousness, those who are indeed escaping from those who live in error; 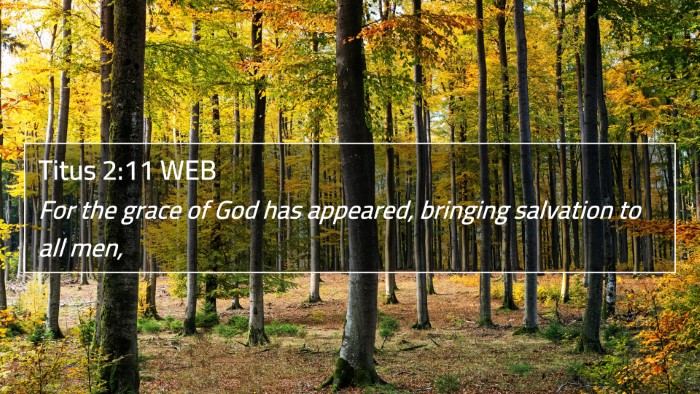 Titus 2:11 (WEB) »
For the grace of God has appeared, bringing salvation to all men, 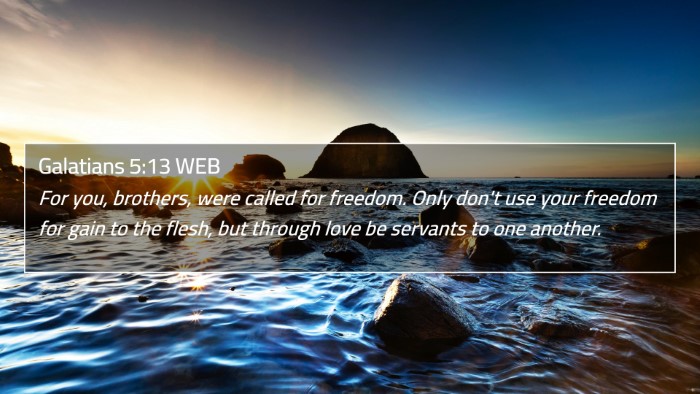 Galatians 5:13 (WEB) »
For you, brothers, were called for freedom. Only don't use your freedom for gain to the flesh, but through love be servants to one another. 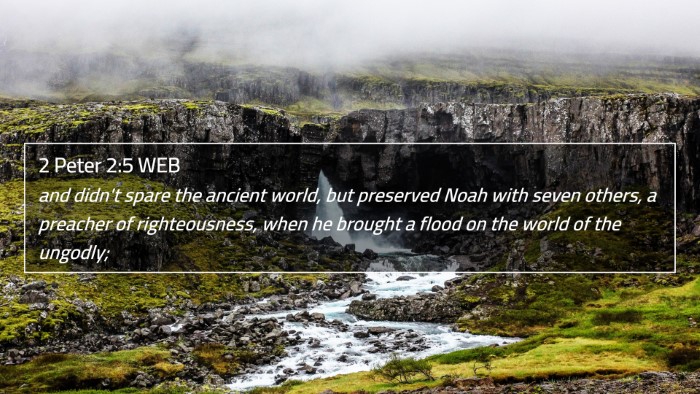 2 Peter 2:5 (WEB) »
and didn't spare the ancient world, but preserved Noah with seven others, a preacher of righteousness, when he brought a flood on the world of the ungodly;