Christian 4K Wallpapers with inspirational Bible verse quotes on beautiful images and backgrounds. Download Jude 1:7 WEB ultra hd wallpapers with Bible verses and share with your friends and family on Instagram or any social media platform. You can also use the links below to click and share the Jude 1:7 WEB 4k backgrounds on Facebook, Twitter, Pinterest, LinkedIn, WhatsApp and other social media websites. Scripture Images (https://www.scripture-images.com) offers a large collection of UHD Christian wallpapers 3840x2160 and background images with Scripture quotes. 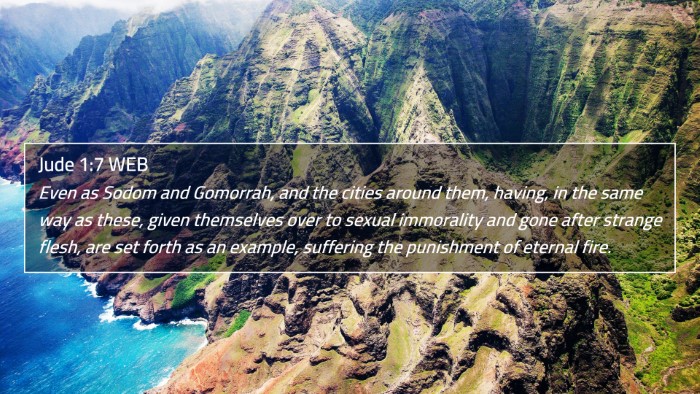 Even as Sodom and Gomorrah, and the cities around them, having, in the same way as these, given themselves over to sexual immorality and gone after strange flesh, are set forth as an example, suffering the punishment of eternal fire. 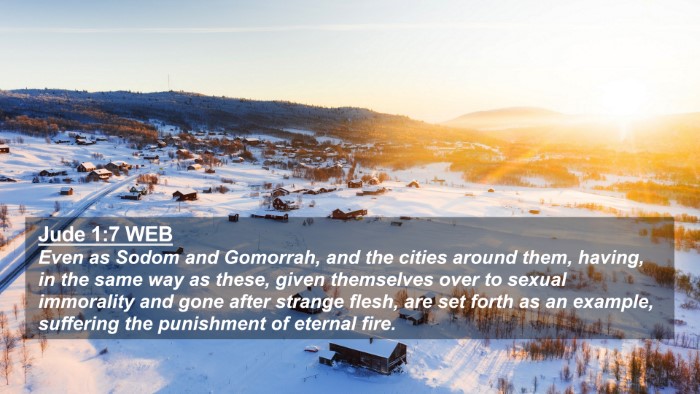 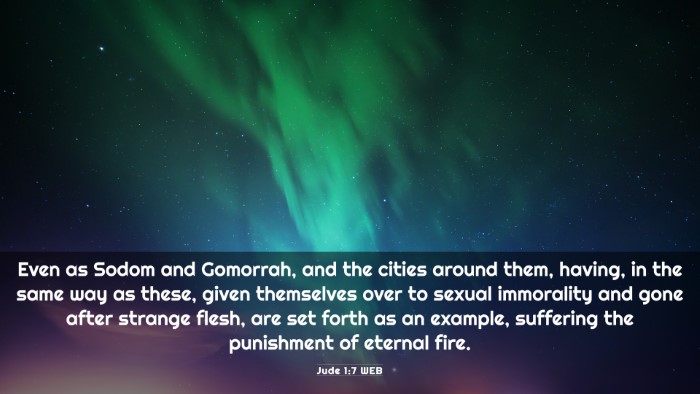 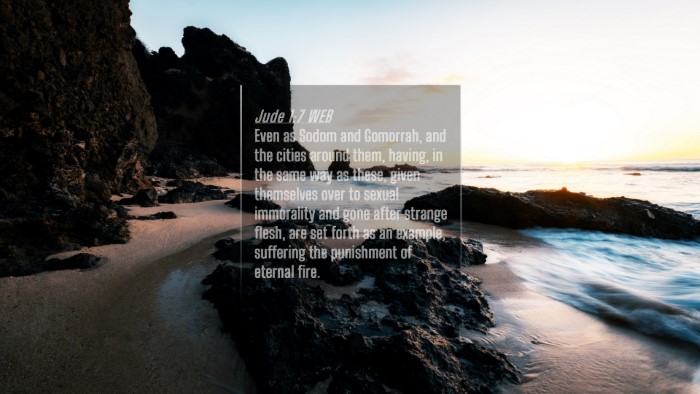 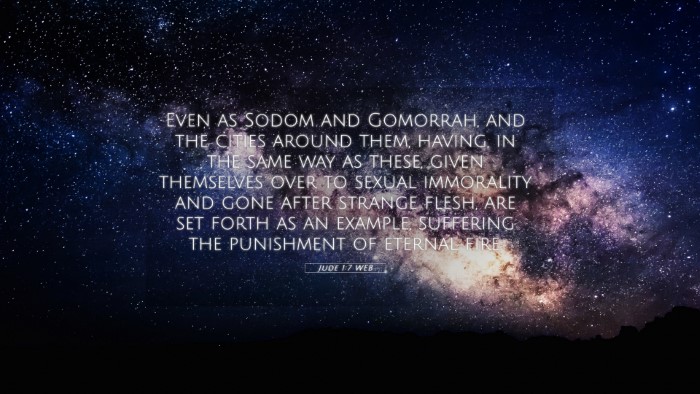 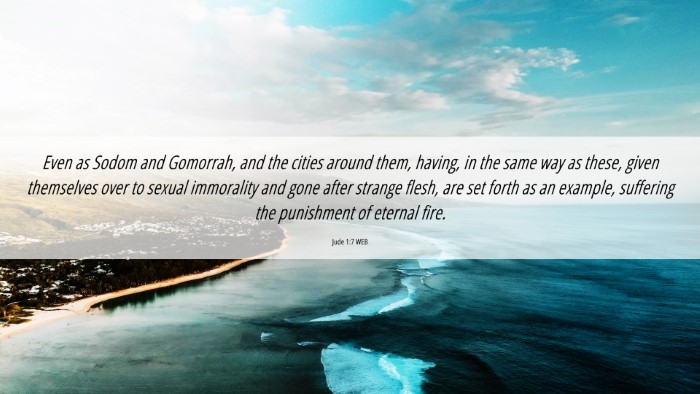 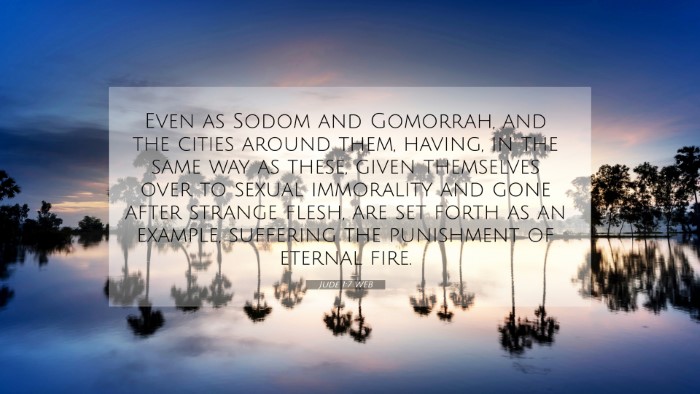 This cross-reference page section has been added with the hope of bringing in-depth meaning and understanding to the Scriptures. The cross references below can help identify similarities between Bible passages. The verses below have been identified in our system as verses related to Jude 1:7 WEB. Please click on any image below to navigate to that specific Bible verse page. 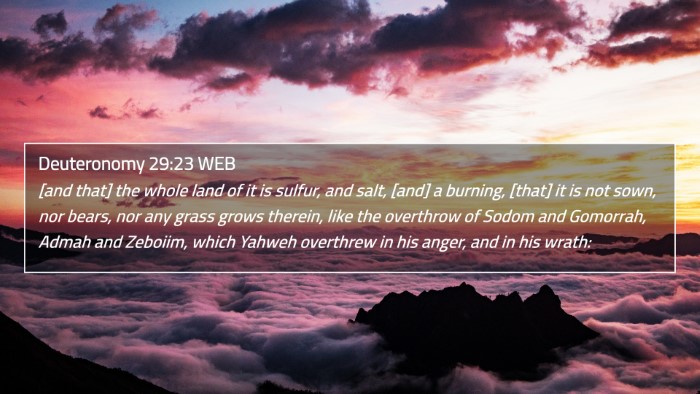 Deuteronomy 29:23 (WEB) »
[and that] the whole land of it is sulfur, and salt, [and] a burning, [that] it is not sown, nor bears, nor any grass grows therein, like the overthrow of Sodom and Gomorrah, Admah and Zeboiim, which Yahweh overthrew in his anger, and in his wrath: 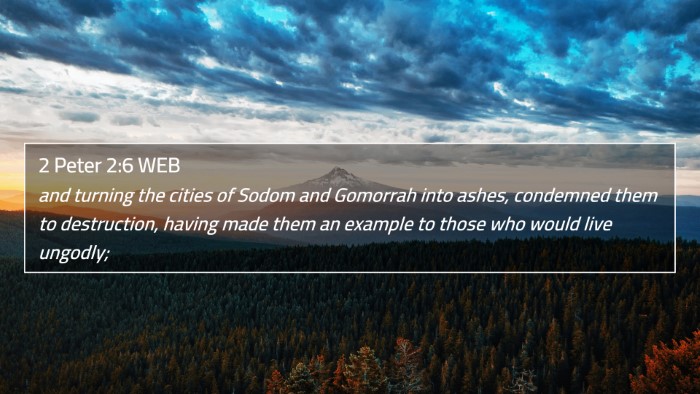 2 Peter 2:6 (WEB) »
and turning the cities of Sodom and Gomorrah into ashes, condemned them to destruction, having made them an example to those who would live ungodly; 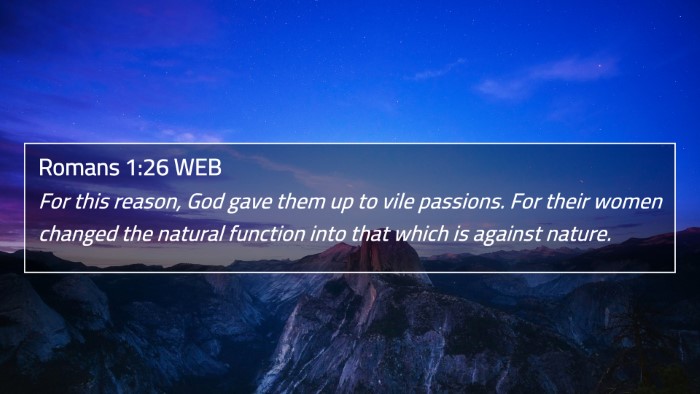 Romans 1:26 (WEB) »
For this reason, God gave them up to vile passions. For their women changed the natural function into that which is against nature. 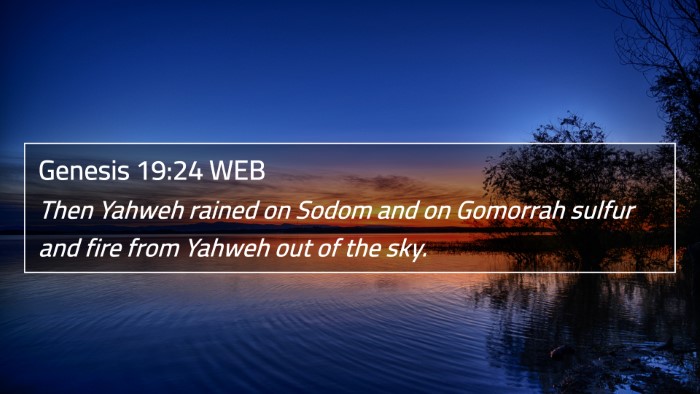 Genesis 19:24 (WEB) »
Then Yahweh rained on Sodom and on Gomorrah sulfur and fire from Yahweh out of the sky. 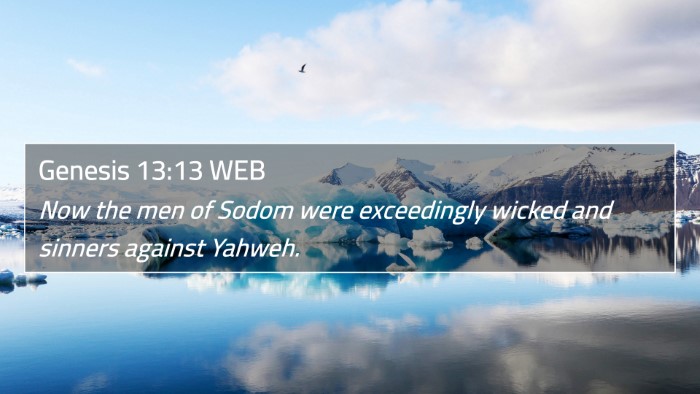 Genesis 13:13 (WEB) »
Now the men of Sodom were exceedingly wicked and sinners against Yahweh. 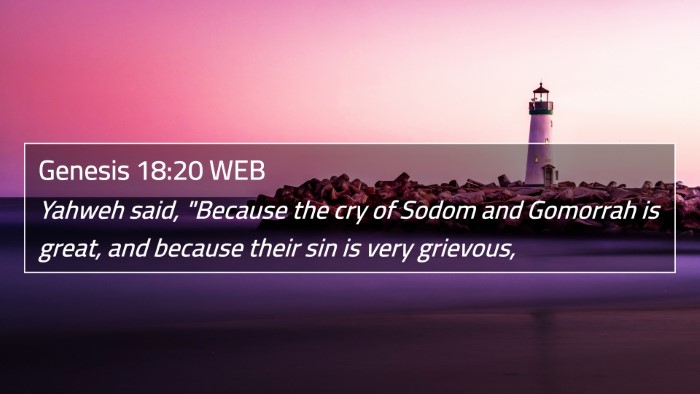 Genesis 18:20 (WEB) »
Yahweh said, "Because the cry of Sodom and Gomorrah is great, and because their sin is very grievous, 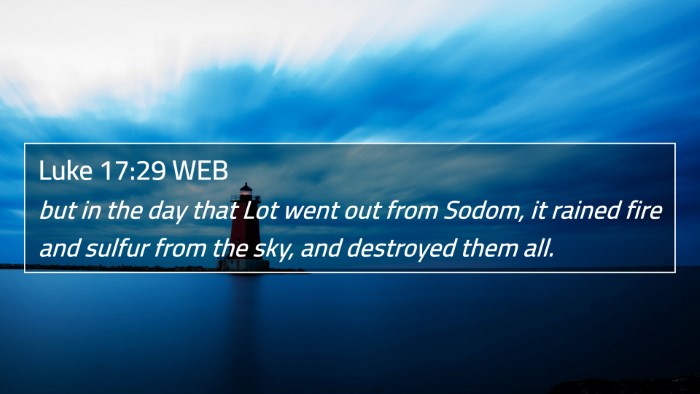 Luke 17:29 (WEB) »
but in the day that Lot went out from Sodom, it rained fire and sulfur from the sky, and destroyed them all. 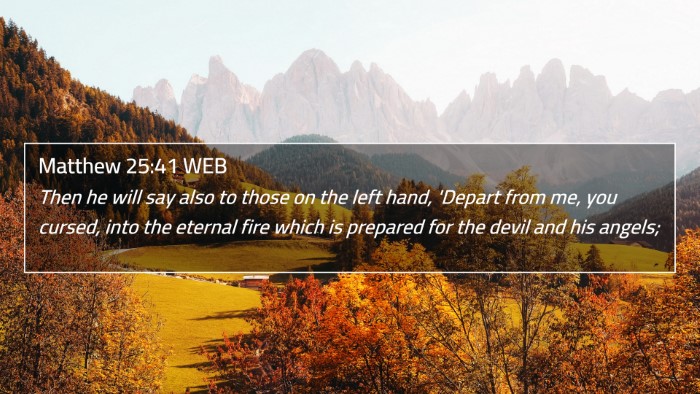 Matthew 25:41 (WEB) »
Then he will say also to those on the left hand, 'Depart from me, you cursed, into the eternal fire which is prepared for the devil and his angels; 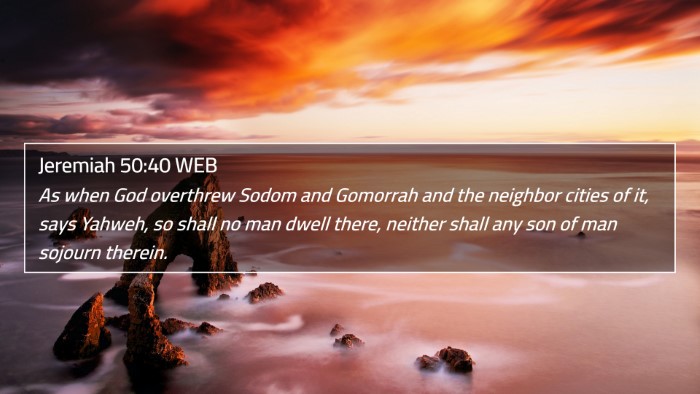 Jeremiah 50:40 (WEB) »
As when God overthrew Sodom and Gomorrah and the neighbor cities of it, says Yahweh, so shall no man dwell there, neither shall any son of man sojourn therein. 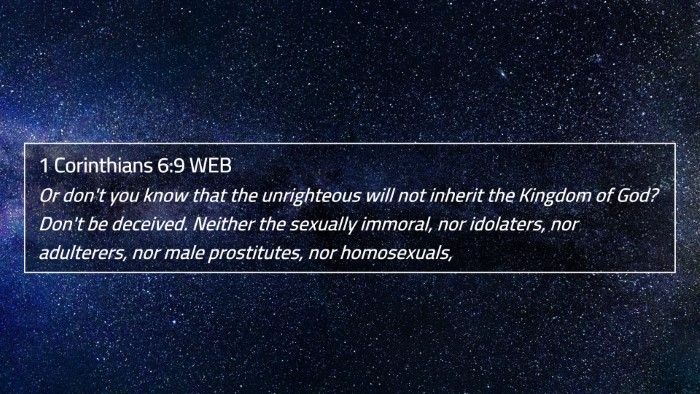 1 Corinthians 6:9 (WEB) »
Or don't you know that the unrighteous will not inherit the Kingdom of God? Don't be deceived. Neither the sexually immoral, nor idolaters, nor adulterers, nor male prostitutes, nor homosexuals, 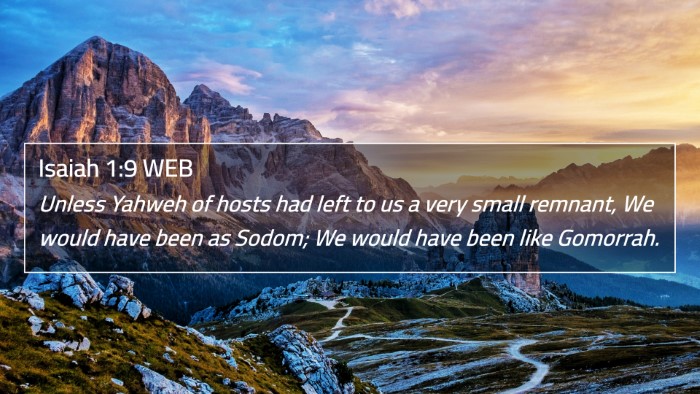 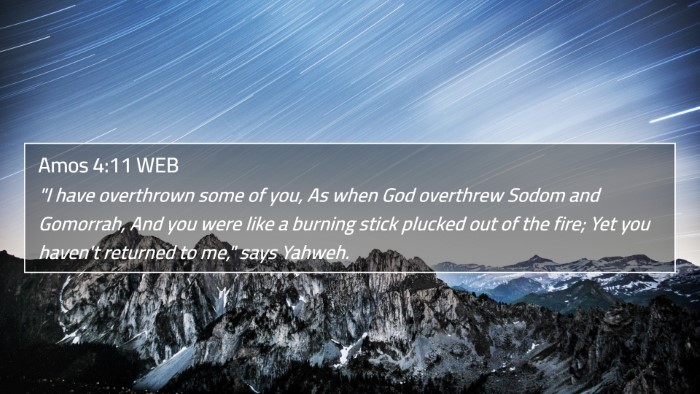 Amos 4:11 (WEB) »
"I have overthrown some of you, As when God overthrew Sodom and Gomorrah, And you were like a burning stick plucked out of the fire; Yet you haven't returned to me," says Yahweh.